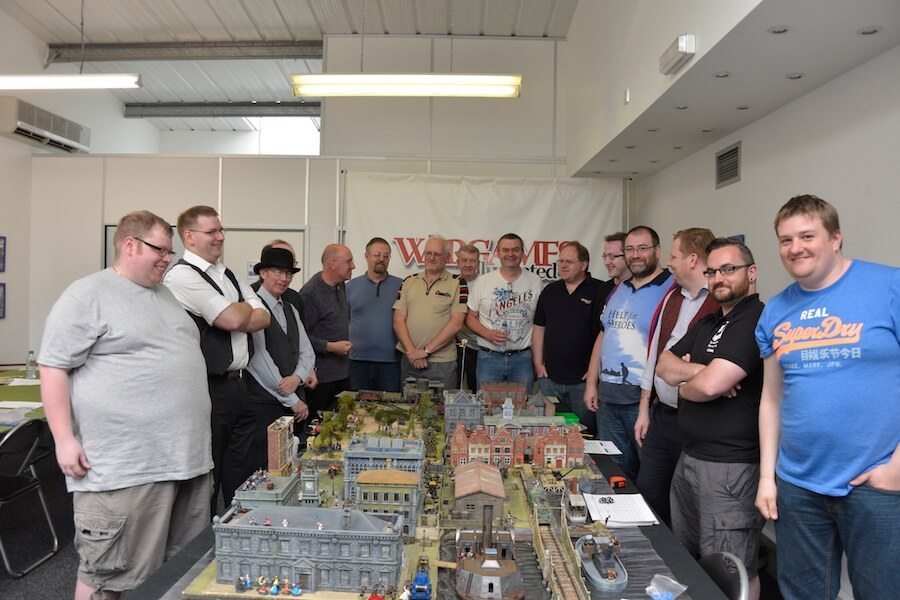 …Or, Why I’m going to Nottingham again!

Mike Strong provides an insight into what has motivated him to keep coming back for more at our WI hobby sharing events based at our HQ in Nottingham – in fact, we have our 7TV 2nd Edition gaming day coming up at the end of May, so check out our webstore now!

It started with a Nickstarter. More specifically, it started with the Nickstarter for In Her Majesty’s Name, a Steampunk game from Osprey and some cool models released alongside it. I had bought the rules and the Servants of Ra Company, flicked through the rulebook, splashed some paint on the models and played about two games of it, then put them away in a cupboard. I was convinced that it was a really good game and had loads of great potential for storylines and plots and nefarious doings, but my opponent and I are notorious gaming butterflies and we had something else to play.

A few months later, we saw the advert for the WI campaign day.

It looked very tempting. A couple of games, a friendly campaign rather than a competitive tournament, and another chance to play IHMN. I booked two places immediately.

For the next few weeks we played a lot of In Her Majesty’s Name. Wayne, the WI Sub-Editor, had sent through the outline for the day and we knew we would need small companies of 250-300 points and that we would be playing a couple of special missions during the day. We felt that, if we were going to play in the hallowed halls of WI, we should at least know the rules! So it came to pass that one Saturday morning we turned up at Wargames Illustrated HQ in our best waistcoats and fighting trousers (because, you know, Standards) with rules, dice and models all ready to begin.

The end of the In Her Majesty’s Name Day, complete with authors and happy gamers

How It All Worked

Wayne started to explain a bit about the day and the more he explained the more I felt I was going to enjoy this. The plan was all about easy, relaxed gaming – the sort you’d get at a club. In fact, as he went on to explain with increasingly misty eyes and a far-away sort of voice, that’s exactly what they were aiming for; a sort of Wargames Illustrated wargames club, based on people turning up and playing a campaign for the day. It wasn’t going to be a tournament with winners and losers; it’s easy to find tournaments to play, but if that isn’t your style of gaming it’s much more difficult to find a group that plays narrative style campaigns. Most importantly, the ethos of the day was about having time to have proper games, to talk to your opponent, and to look at the other great models and boards on show rather than to be pressured into rushing from one table to another and play game after game. We were shown where the drinks and the snacks were and told to basically help ourselves – the only house rule was to keep drinks off the tables because Dan was wandering round the tables taking pictures and he felt that pictures advertising a certain brand of fizzy drinks weren’t wanted in the magazine!

We divided into two groups trying to protect or seize items of power which were held by the Royal Family. Naturally, playing as the reincarnated Pharaoh Akhenaten, I joined the side of the Dastardly Villains. It was time to take back some items which were rightfully mine.

For our first game, we had to find a civilian with insider information about the locations of a number of secret artefacts and then escort him off the table. At the end of the game each player was given an envelope with a clue in, which we took back to our teams and tried to work out what to do next. I did pretty well in my first game and managed to get the informer off the board for a brief friendly chat with Akhenaten. Unfortunately for team Dastardly Villains, the heroes had done their jobs very well and other than knowing the names of some of the artefacts, and the fact that they were going to be moved, we didn’t know much more.

The second game was a race to find a secret chamber hidden somewhere on the board. These chambers were so secret that the Companies would only be able to gain entrance once the opposing Company was eliminated. I had a superb game watching increasingly large groups of Cultists trying – and mostly failing – to kill mighty Terracotta Warriors, but in the end the last one thudded to the ground with a mighty crash. Again we were given an envelope with clues and details in, and had a team talk about what we might do next.

Lion Rampant Day in full swing, something interesting is happening just a few tables away!

Lunch was included and afforded an opportunity for a fascinating talk with Craig and Charles, the authors of IHMN, about how they had designed the game and their current and future projects. We were also given a tour of WI by Wayne, and on our return we saw the separate tables had been transformed into a single large 4’x12’ board covered in spectacular London scenery. We were given a whistle stop tour of the features of the board and told to choose somewhere to deploy.

I chose to deploy to attack the Queen’s steam carriage, which was escaping the board bearing Queen Victoria (Gawd Bless ‘er) and the mythical Crown of Command.

This game had everything: Knights of Malta vying to overload the engines of an ironclad and blow it up, Rasputin and his company raiding the Royal Theatre, while a group of Ladies of Dubious Morality with hunting rifles were picking off anyone who moved from the top of a police station. At one point Professor Caractacus Potts and Chitty Chitty Bang Bang were spotted flying over the beleaguered city on a secret errand known only to themselves. Finally, there was the spectacle of Queen Victoria (Gawd Bless ‘er) emerging from the ruins of her steam carriage with her surviving royal bodyguard and carrying a steam-powered Gatling gun. Moments later she had been beheaded by Akhenaten, but the legendary Crown of Command was last seen being stuffed into the handbag of another of the Ladies of Suspicious Character, who promptly legged it.

In the end, Wayne decided that the forces of evil had been just too strong for the defenders of order, since almost all of the objectives had been captured by the villains, and a prize was awarded for the best painted company.

In Her Majesty’s Name was the first of four WI campaign days I’ve done in just over a year. They’ve all been great fun, and I’d definitely recommend coming down to one if you have the opportunity. I’ve met some fantastic opponents, seen some amazing armies, and played some superb games.

Lunchtime on Lion Rampant Day, an opportunity to learn about the armour and weaponry of the era – we always try to ensure that someone is on hand to entertain us!

And It Doesn’t Stop There…

Other days in this series that I have attended so far:

Frostgrave Day – In which warbands competed to find the ingredients to brew a magic potion to cure something-or-other in a new and original mission written for the occasion by Osprey Joe. Highlights of this included my wizard killing an imp and managing to bring to life a tremendous number of fast moving constructs, while demonstrating no MasterMind skills whatsoever.

Lion Rampant Day 2 – The War of the 12 Bastards – In which it was shown that 1) elite archers are extremely good at shooting horses, 2) The sport of car park duelling is alive and well in Nottingham and 3) that deploying your army behind units of crossbowmen who haven’t been paid for a while is a recipe for general inaction!

Each of the campaign days has followed a similar structure, a meet and greet where the campaign has been explained, followed by a first game with plenty of time to play, chat, look at other models and tables and do any campaign related stuff. Then a lunch break, a proper lunch break with proper lunch, giving a proper healthy ballast for a hearty afternoon’s gaming i.e. usually something hot with chips, or some sort of stew. Lunchtime entertainment is also provided, depending on the game there has been duelling in the car park, a chat with game designers, even an in-depth discussion of the movie Frozen… After lunch comes game 2, again with time for a chat and a look around, maybe even some light shopping, while if the game finished quickly there’s usually time for a rematch. For the final game, the boards are rearranged to make bigger boards, either for doubles games or all out warband Battle Royales, after which there’s a presentation where Winners are announced, Honourable mentions are mentioned and whatever hobby prize is awarded. Finally, Wayne announces that he’s got everyone’s email address and confirms that you now get priority booking on subsequent events, and that he won’t sell your details to other associated companies like some organisations do!

Visit our webstore via this link and book yourself, and perhaps a friend or two, an all-inclusive ticket for our 7TV Day – http://www.wargamesillustrated.net/wargames-illustrated-7tv-2nd-edition-day/

Frostgrave Day, and Annie is about to do something awesome!

Our Africa Day, right back at the start of it all, using the Death In The Dark Continent rules

Dave is about to enact his cunning plan, wiping Matt’s force from the battlefield

Quick check of the rulebook, no hurry, there’s plenty of time for beginner and expert alike at our Campaign Days

This is pretty much the moment when Queen Victoria exited her crashed Steam Carriage carrying a Gatling Gun!

Setting the scene for the final mass battle!

What it’s all about – rolling dice, gaming and sharing the hobby with like-minded enthusiasts