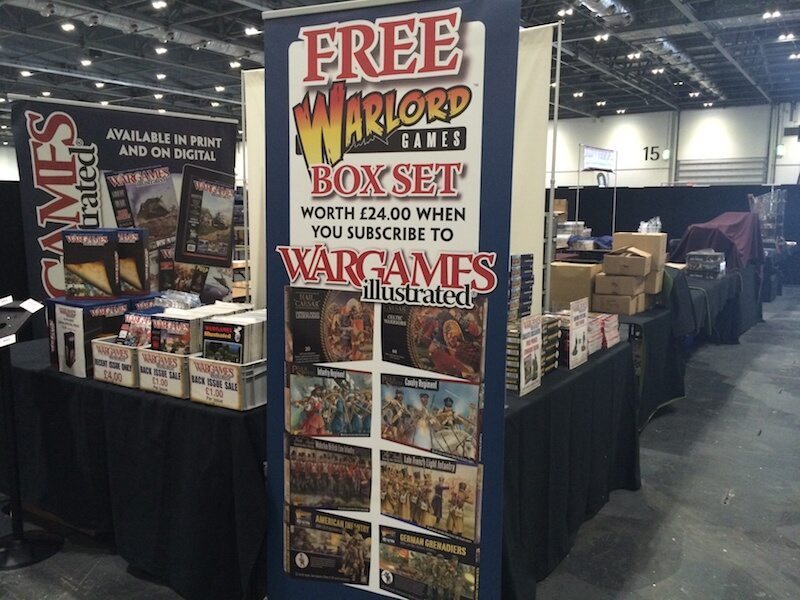 Once again, thanks to the South London Warlords, we will be running the ‘WI Zone’ at Salute 2016. Wargames Illustrated are presenting four participation games and the second outing of Hobby University UK, based upon the HMGS original.

Stop The Truck! A Mad Max Experience – Come and take part in the post apocalyptic adventure of a lifetime as you re-enact the action from the original trilogy – can you out-drive everyone else? Will you be able to survive the mayhem? Can you STOP THAT TRUCK? This will be the last ever wargames show outing for one of the most fun games on the circuit, run for us by the GIMPS Club heroes who came up with the concept back long, long ago!

Go Team, Go! – It’s 1985 and the Russians are coming! Having been inspired by the Team Yankee rules from Battlefront, the Leicester Phat Cats Wargames Club have put together a fully interactive Participation Game into which you can drop in and out as you like. Will you smash aside the capitalist lackeys as the Soviets or hold the line as Combat Team Yankee as the US forces? The fate of Western Europe is in your hands!

This image is from the Salute 15 game. You can expect to see a similar high quality game this year, only this time in 15mm.

Northwest Frontier, 1879 – This is our showcase game, run for us by the Sons of Simon De Montfort Wargames Club. Inspired by a classic movie, the aim is to spirit away the young Prince Kishan and prevent his capture or murder by Afghan tribesmen. A steam train, Bengal Lancers, plucky Indian Army infantry, dastardly tribal cavalry, cannon, Gatling guns and more all feature in this multi-player drop-in Participation Game. With a cast of hundreds of 28mm figures donated by the Perry’s, North Star, Foundry and more, plus our ‘re-vamped’ terrain from TM Terrain (see page 80 of WI342) and buildings from Fortress Models, this is a great looking set up!

Sidewinder – Fly into the Danger Zone with this game of modern era aerial combat presented by the rules’ authors and Lenton Gamers. Do you hang back and launch missiles or get up close and let loose with your cannons? Can you out fly the enemy or will he appear from nowhere and cut you out of the sky? Whatever happens, keep an eye on your instruments and one hand on the ejector seat lever as you turn up, take part and move on as either a Top Gun or a Wash Out.

Hobby University UK is back! – The ultimate ‘make and take away’ sessions, with donations from top manufacturers like the Perry’s, Victrix, Warlord Games and Mantic. Turn up, choose one of the plastic items on offer and get taught a few ‘tricks and tips’ on painting and modelling. You’ll have the chance to put together figures and models during a particular session, plus take away a sample of some of the latest and best miniatures on the market.

Our Hobby University UK set up from last years Salute

And then there’s our trade stand! – Take out a one year subscription and receive a FREE Warlord Games Gift Card worth £25 which you can spend on the day at the Warlord Games stand.

The WI trade stand from Salute 2015

We will also have pre-release copies of the May issue of the magazine, back issues, slip cases and Giants in Miniature figures.