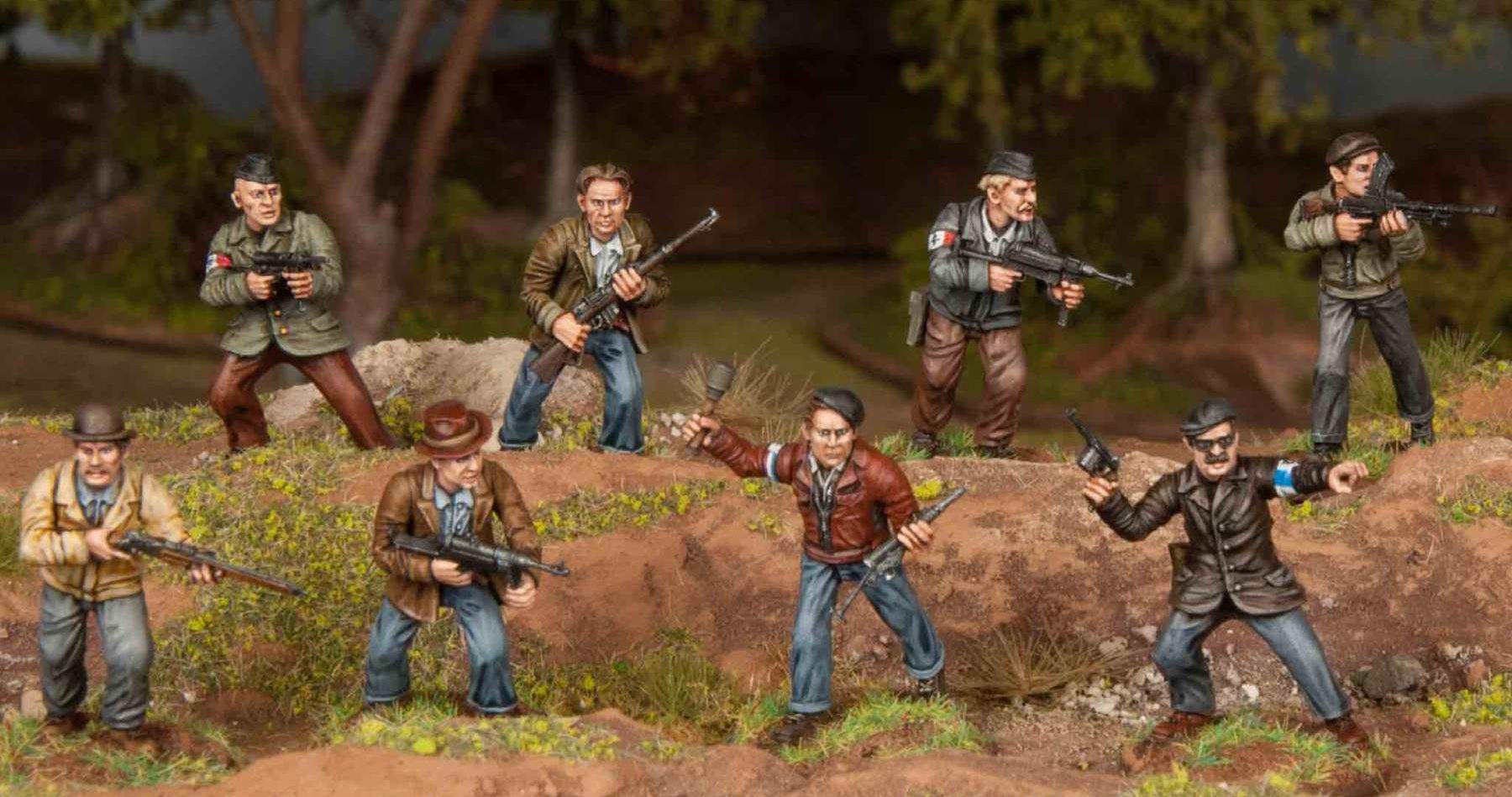 Within the box, you’ll find enough frames to build 32 partisans, equip them with an impressive array of weapons, and put a load of spares aside for future projects. Clearly, these resistance fighters have built up some excellent connections, gathering more guns and grenades than they could ever hope to carry!

Each frame has enough torso and leg combinations to build four men, and the clothing and stances here are all different, offering a wide range of dynamic and contrapposto poses with surprising versatility, working well with whatever arms you add. Combining these bodies – some in civilian garb, others wearing uniform elements – with the other bits on the packed frames creates a visually exciting and rag-tag bunch of freedom fighters.

There’s a cornucopia of options in their arsenal from various nations: grease guns from the US, German MP 38/40s, British Sten and Bren guns, alongside an equally diverse range of pistols (including a Mauser with the kind of thin barrel that wouldn’t be possible in metal), and British and German grenades.

Many of the guns have matching left arms and the fit here is good once you work out the pairings. The frames are not marked with numbers and no guide is included, so you’ll need to do some dry fitting. There are no bases included either (beyond the small ones cast as part of the figures) but the bare-bones approach is what Wargames Atlantic do, focusing on the sculpts and model options. We’ll let them off because they always offer so many goodies on their frames and the price is right!

Heads are plentiful with 14 per frame from youthful to upper-middle age. They’ve been designed to be usable in different theatres and nations, it seems. Alongside bare heads (with varying amounts of facial hair) there’s headgear from different civilian classes and areas as well as more militaristic caps. These look right for anyone wanting to build the models as Soviet partisans, rather than French Resistance, due to their similarity to the pilotka caps.

There are some accessories on the frame – holsters, knives, and equipment packs – and this is where we feel the tooling isn’t as well-considered as it could be. The backs of these items are flat, rather than curved, so they stand away from the models quite awkwardly. The connection points between the heads and necks are flat too, which reduces pose possibilities. One of the Sten guns has a fine stock that is incredibly difficult to get off the frame without snapping it (we tried various methods). These are relatively minor criticisms though, and easily remedied with a knife and poly cement!

While the brave French civilians in WW2 were a mixture of men and women it is a shame this Wargames Atlantic offering doesn’t contain any female models. We’re hoping that will be remedied in the Partisans (2) box that we’re now expectantly waiting for! If you want more diversity you could look to Warlord’s recent partisan releases, but the quality of their metals is quite a way below these fine-looking figures.