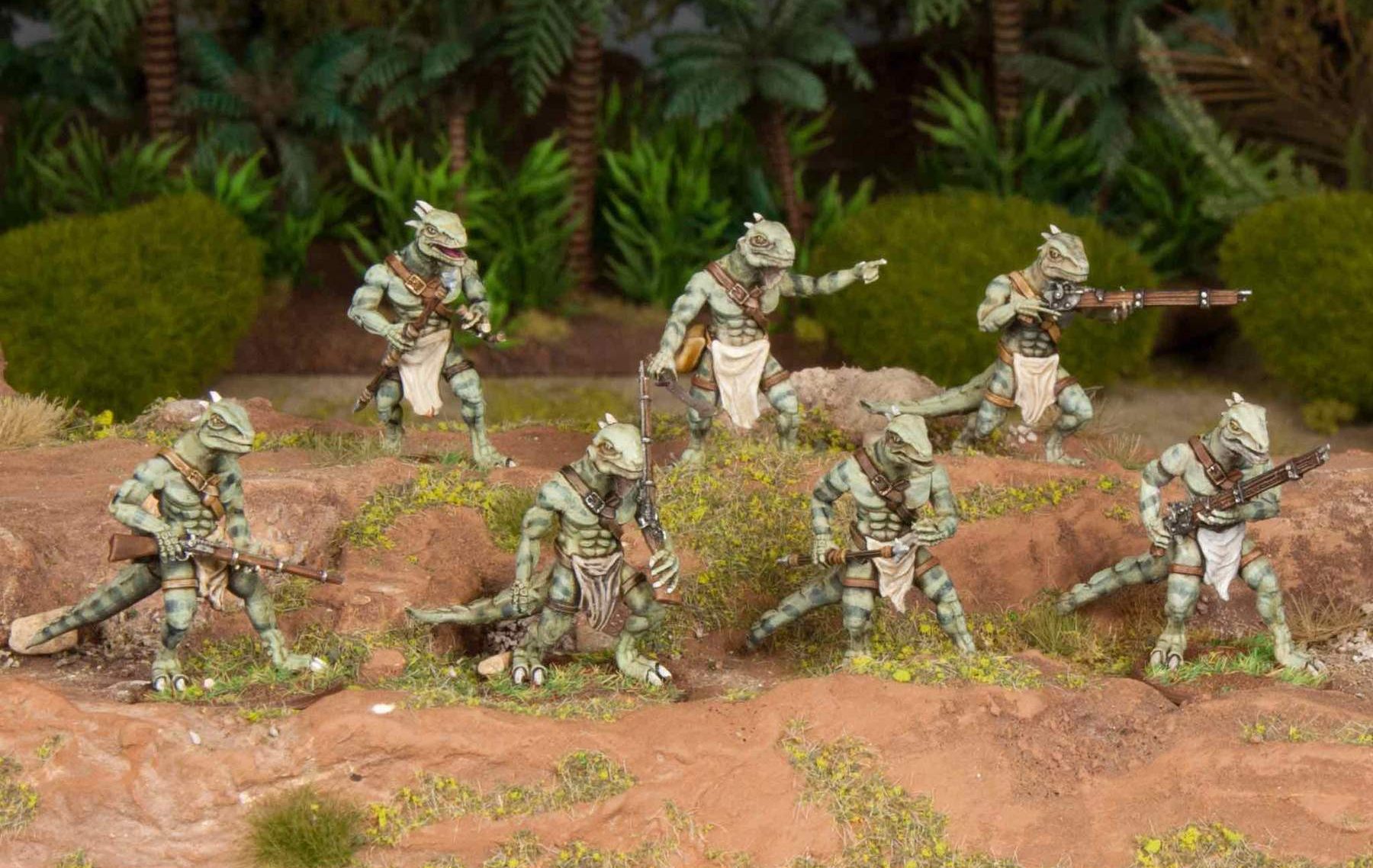 This box is all about the frames. To be more precise, it’s about the same frame eight times as that’s all you get!

None of the instructions, bases, decals, and so on that a company like Games Workshop includes with its plastics are present here; that might be disappointing, if not for the fact that those frames hold enough bits to make a large number of models. You can build 24 Lizardmen for multiple periods and will end up with a load of spares too. That’s the kind of generosity GW don’t provide for £25 ($35 US)!

There are three 28mm body parts on each frame, in varied upright poses, surrounded by a generous offering of arm and head options. There are also three tails to attach to your Lizardmen and these make for balanced looking poses with a good impression of weight and power. The rest of the space is crammed with some spare pouches and ammo.

The Lizardmen stand slightly taller than models such as WA’s historical Partisans, British Rifles, and so on, but will still fit just fine with those ranges. The slightly bulkier sci-fi models that WA produce are a near-perfect match for the Lizardmen in height. Should you intend to mix these miniatures into a Warhammer or AoS army you’ll find they complement the GW Saurus in a Lizardmen/Seraphon army well while remaining visually unique.

There are two spear arms and a sword arm per frame for fantasy gaming, along with many different head options. We’re not lizard or Lizardman experts so we’ll describe them as spiky lizard, slick lizard, and chameleon lizard and we especially like that last one.

If sci-fi is your preference, there is one more head option wearing gas masks; this caused a giggle in the office as we had a far too in-depth discussion about the practicalities of said masks. The consensus is that their design would almost certainly render the wearer combat ineffective, blinding them to anything ahead, but it’s sci-fi so we might be taking it all too seriously! The gas mask style fits well with the arms carrying auto-rifles, allowing you to leave the jungle kingdoms of your preferred fantasy game for the jungle kingdoms of your sci-fi favourite!

Finally, there are some musket options – one that feels more historically accurate, another that is chunkier and has had more creative licence applied. These would fit brilliantly into any of your weirder gaming. We can imagine In Her Majesty’s Name players having fun with them while playing that game’s new second edition.

This is a well-sculpted and nicely cast kit that has clear detail that paints up nicely. The versatility will add appeal and we suspect it will be useful in a huge range of games.