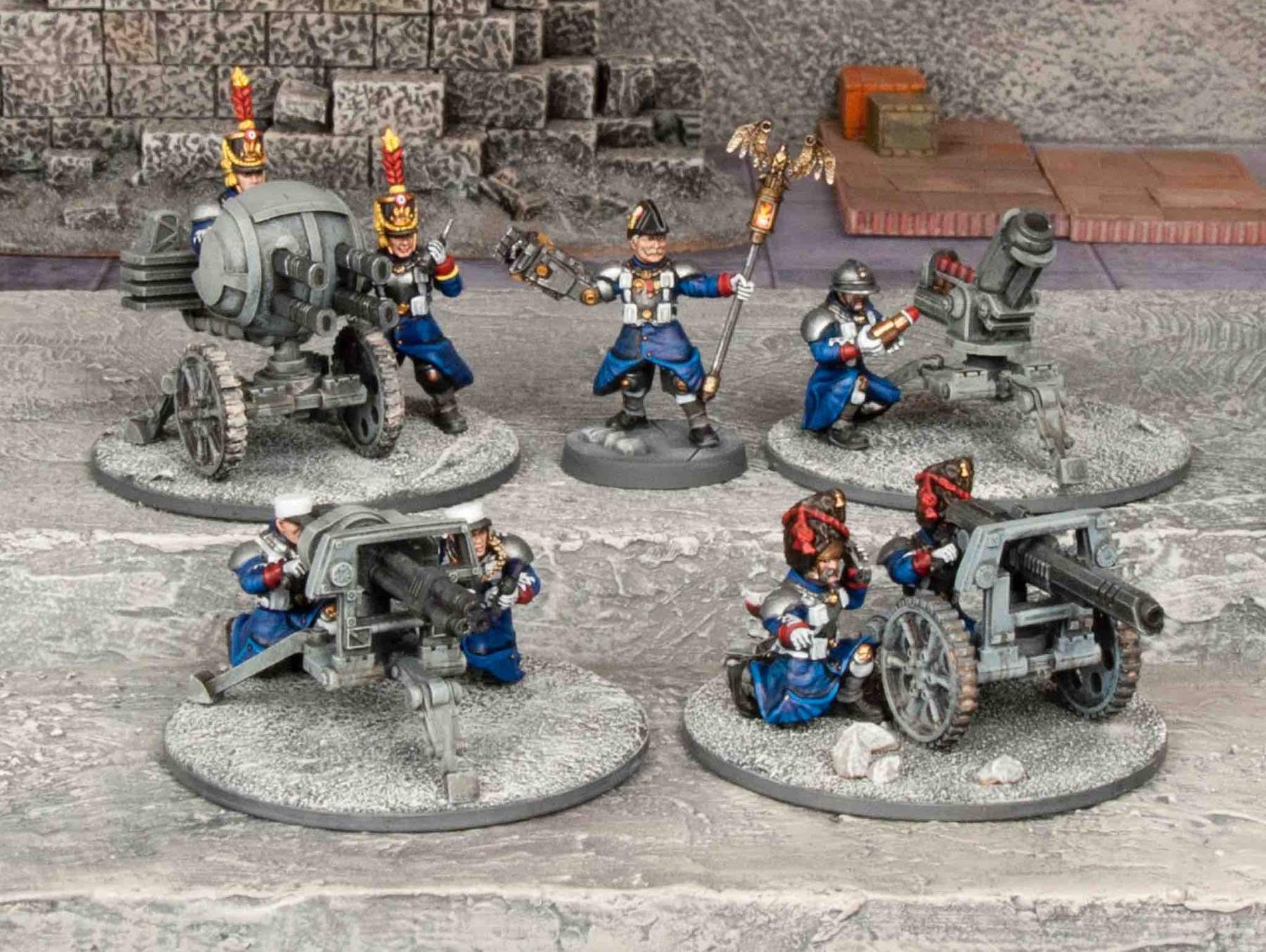 As part of our current (and unofficially titled) ‘Crudload of Cool Wargames Atlantic Sets’ series, we’re perusing a box of command and heavy weapon options here. Designed to accompany the core Les Grognards box set (which has been available for a while) two different frames are included in this box to ultimately allow you to build six heavy weapons teams for your sci-fi / Napoleonics hybrid Les Grognards troops.

Before we dive into specifics we’ll say that the frames within are, essentially, a treasure trove of options that will allow you to construct all manner of interesting models in finely cast 28mm scale hard plastic. While the core of the set is the heavy weapons the sheer range of parts will provide you with many other options and those will not be limited to just the models you build here. You’ll end up with tubs of spares too.

Three of the ‘main’ frame are included and they provide enough heavy weapon bits to make six varied weapons along with the torsos and limbs you’ll need for 12 crew. As well as that there’s a second frame, packed with extras, and two of these are also included.

The weapons
Six heavy weapon ‘platforms’ can be built and the guns themselves are an interesting mix. There’s a mortar, a single-barrelled laser or railgun, a three barrelled multi-fire cannon type, and a complex four-barrel firing platform that your gunner sits behind. These are placed atop either a tripod base or a wheeled platform and, once constructed, look excellent.

The construction itself is a voyage of discovery. Unlike the WA Eisenkern Stormtroopers, with their handy build guide, this frame is bereft of any numbers or letters and there’s no guide online, so you’ll need to work out how everything goes together. This detective work is actually quite fun but if you’re wanting an easy and quick build process maybe look elsewhere!

The final look of the big guns is generic in a way that’s useful rather than detrimental. They’ll fit into your many sci-fi choices and, when Death Fields finally gets its rules, will be perfect for that too.

The troops
Les Grognards are made for a background, designed by Wargames Atlantic, that essentially mixes all manner of real-world and historical influences into a singular sci-fi combat arena. That allows for a clear Napoleonics visual influence here but these ‘grumpy’ French have some iconic options from other periods too. These are clearest in the head options, which are plentiful, and you can build all models with shakos, bearskins, kepis, or WW1 style Adrian helmets. All of these have a bare face or gas-masked versions too.

But we’ve gotten ahead of ourselves! You can build 12 models from the frames to either go with your guns as crew or represent troops such as commanders, specialists, comms, and more. The bodies have kneeling and standing poses, there are various arm and weapon choices, and some female heads to throw into the mix.

Look to the second frame and you’ll find the frankly ridiculous amount of head variants we mentioned earlier. We’ve made models in some varied poses for you to peek at. Some are crew, crouching behind the big guns and firing, spotting the next target, or loading a shell into a mortar. Others represent leaders, snipers, and other essentials.

Ignoring the initial challenge of putting the guns together properly (which we hope our photos and spins will make easier) this is a fine set and as the parts are all compatible with the first Les Grognards troop box it has extra value and will add much versatility to your army.