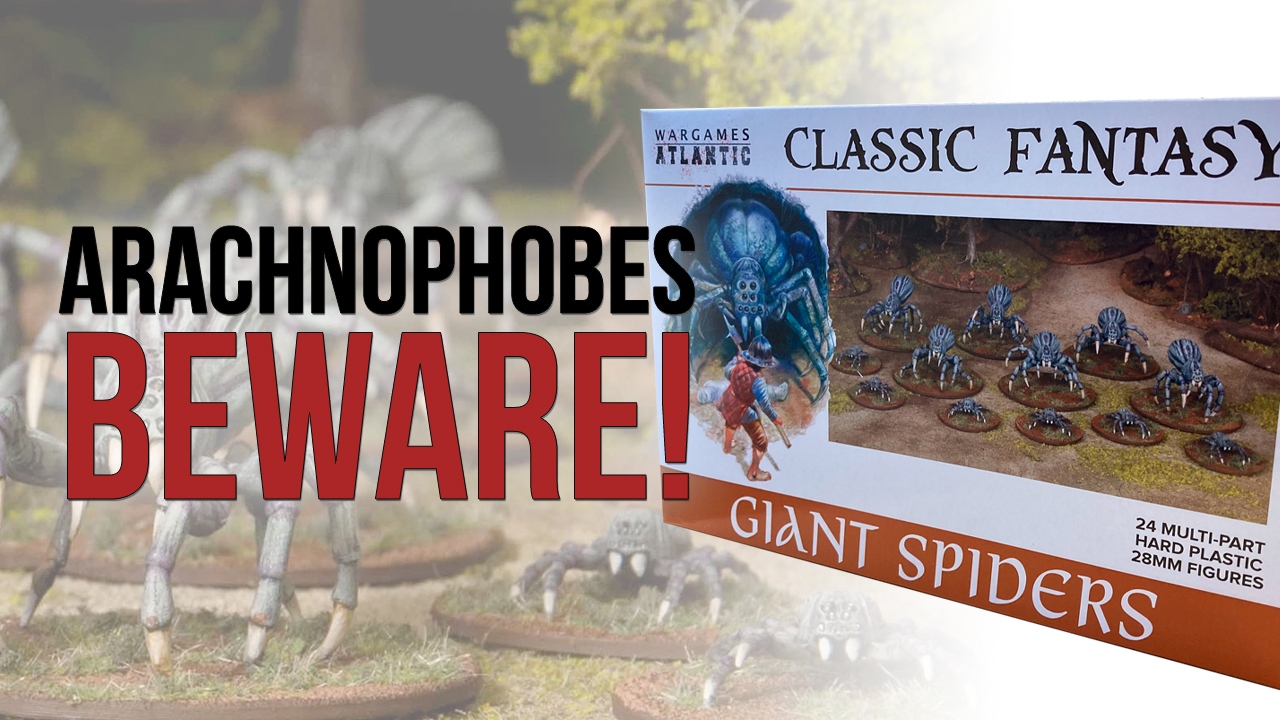 Arriving to bolster Wargames Atlantic’s Classic Fantasy range, this Giant Spiders box contains six identical hard plastic frames. Each frame is just shy of 15cm by 15cm and bristling with arachnid parts. Enough gribbly bits, in fact, to give even the bravest “I’ll remove the spider from the sink” home champions nightmares.

On each frame are a ton of different bits to make giant spiders, but we’ll get to them later. Before that, there are two single-part, small spiders. When we say small these are, at scale, still rather large at 13mm from head to tip (not including the legs). You can snip these free and use them instantly and you get 12 in total, in two different poses.

There are also two different web wrapped victims on each frame. One looks like a human or elf may be lurking under the wrapping, while the other has a real ‘Frodo in trouble’ hobbit look to it. However, for a hobbit he’s a big un! He’s almost as tall as the wrapped human.

It’s worth noting that bases aren’t included in the box – you’ll need to buy them separately if you want these and the bigger spiders to go on bases. This is a bit of a shame, but a full box costs a fairly cheap £25 ($34 US) so we’re not going to quibble too much.

We’ll save those quibbles for the pain and frustration we suffered building the damnable giant spiders! But lets talk positives first – there are two of these on each frame and once they’re built they look extremely imposing and really gross! They’re so big that a Wargames Atlantic Goblin Warband (due for release later in the year) will allow you to make Goblin Spider Cavalry by combining the kits.

If you want massive spiders at an extremely reasonable price we’d wholeheartedly recommend these fantastic models … if you didn’t have to build them. We’re no stranger to making kits here but the giant spiders drove us to the brink. Problem one is that there are no instructions (not even online) and a lot of limbs that look similar. Beyond that, and even worse, the parts that are made to slot together via squared-off pegs haven’t been tooled properly, so they require a good bit of pressing to fit. If you’ve fixed any other parts of the kit together before this you’ll probably send them flying as you summon up your power to push pegs into spaces that don’t have enough space.

After that, you’ll need to line up another six legs with rounded mount points, then two more pincers. So, maths fans, lets do some quick calculating. 2 square legs + 6 rounded legs + 2 pincers + 1 body + 1 thorax x 12 to the square root of ‘doesn’t really fit well together’ at a factor of ‘many minutes of holding, balancing and waiting per limb’ = AAAAAARGH! (or 144 parts if you want an exact figure).

It’s a real shame, we’d love to fully recommend the kit but we feel it’s our duty to let you know that you might lose your mind in the process of building the spiders.

The build experience was so frustrating we didn’t even have the heart to make a third, using the optional Death Fields bits, to create laser-toting, mechanical-limbed, space spiders. And something that silly would usually have us salivating!

If you want a horde of cheap giant spiders, and you have the patience required to make them, these are still worth your consideration. The limbs and spares, especially the mechanical ones, will also be brilliant additions to your bits box if you enjoy making conversions of aliens, chaos creations, or Inquisitorial oddness for games such as Warhammer 40,000.