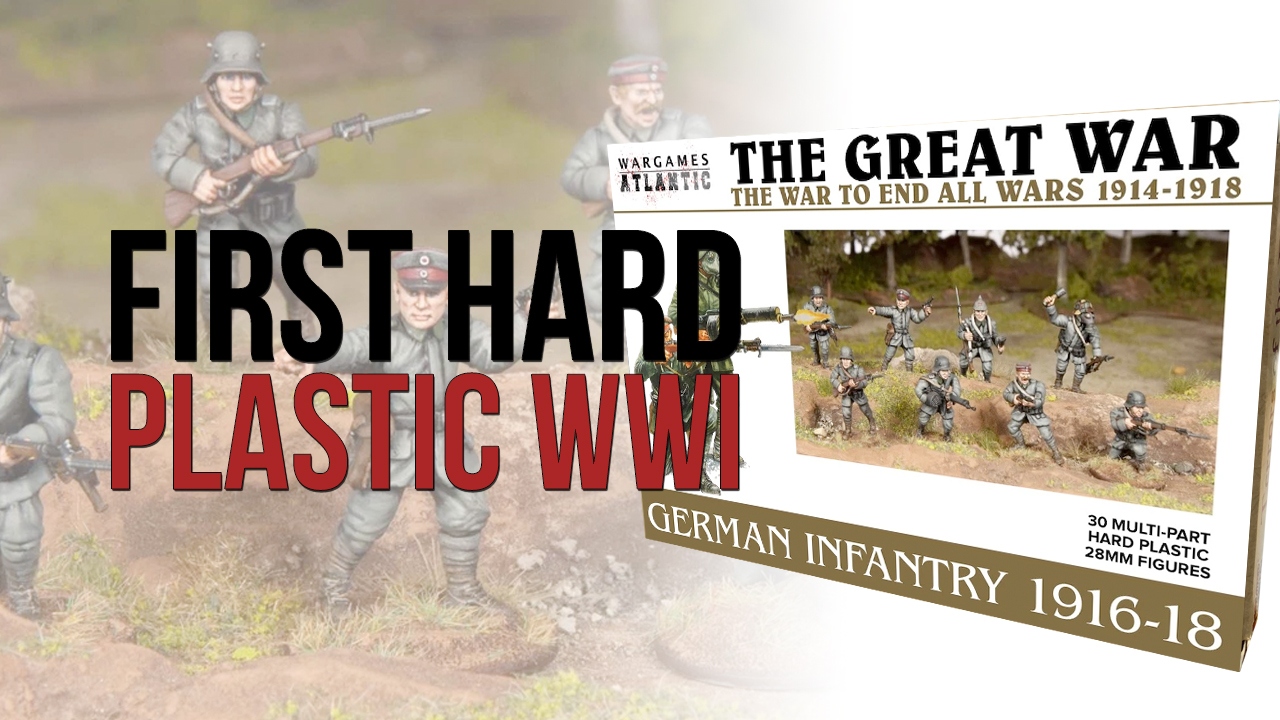 The latest plastic box set in the expanding and eclectic Wargames Atlantic range, is German Infantry 1916 -18.

Below: Spins of six of the figures we made up from one of the frames.

Below: A transcription of the video, for those prefer to read rather than watch.

Inside the box we have five identical frames from which you can build 30 multi-part 28mm figures, representing Germans soldiers from the later years of the First World War.

Taking a closer look at one of the frames – we can see how tightly packed it is, with a total of 92 different clip-off parts.

You are left pretty much on your own as to ‘what’s what’ on the frame – with no guide included in the box.

Each frame has a total of 23 heads: six with caps, six covered by gasmasks (and topped with stahlhelms) and 13 offering a variety of different helmets, including early pickelhaubes. There is some nice details here in the form of moustaches, pipes and grimacing mouths.

Elsewhere on the frame you will find arms carrying grenades, pistols and what looks like Karabiner 98a rifles. Other weapons include one MP18 sub-machine gun and a MG-08 light machine gun, plus ten stick grenades.

It’s a really packed frame and you have a wealth of different options available when equipping your bodies. The figures also go together neatly, with a minimum of extra cutting or shaping.

On the ‘cons’ side, the figures are a little heavy/large in the shoulders and there is a conspicuous lack of webbing/harness when viewing the figures from the rear.

It is easy enough to make up an officer as well as standard infantry and stormtroopers – with enough accessories to take your models trench raiding.

Priced at $35 or £25 you won’t be disappoint at either the quantity or quality of the figures and there are enough options to satisfy both large battle or skirmish gamers.