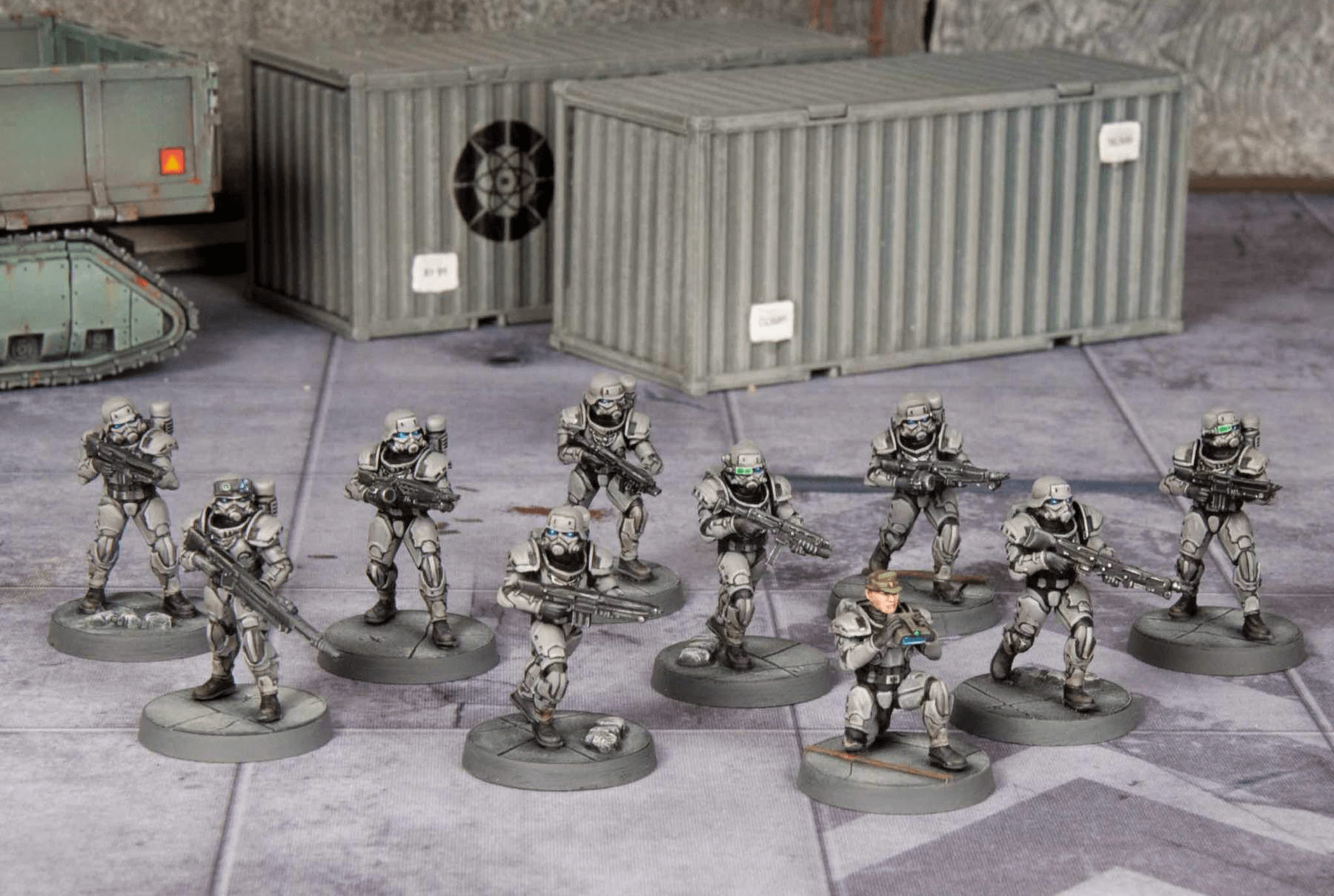 Their first successful Kickstarter campaign, run by a chap called Mark Mondragon, is for sci-fi models – Sturmtruppen and Kriegsmarine for the Eisenkern faction.

Fast forward to a decade later and DreamForge is no more. That doesn’t mean that those early Sturmtruppen (or Stormtroopers to you and me) are off the modelling menu though – Mark Mondragon’s figures are connected to Wargames Atlantic and this rather cool box of figures has emerged – Mark Mondragon’s Iron Core Eisenkern Stormtroopers.

It’s essentially a retooled box of the early plastics DreamForge released and it’s rather good. Four box sized frames are included with five models on each, allowing you to ultimately construct 20 28mm hard plastic figures.

The Stormtroopers are faceless troops in sci-fi body armour with a range of weapon possibilities; once built they look very good indeed. They have a slick futuristic design and, thanks to a mass of parts and options, your whole squad will be dynamically posed and ready for action with a range of guns.

Those poses are driven by the choice of seven leg sets that range from kneeling to upright and all stages of advance in between. Once you’ve fixed them to the three-part torsos (front, back, and pack) you need to choose your weapons and crikey, there are a lot of arm choices. At first, this part of the build is incredibly intimidating – so many parts and no clue quite how they go together, but wait, what’s that? A rare case of numbered parts on a Wargames Atlantic frame? And matching instructions available online?

This is (to a reviewer who has had some trial and error with non-marked Wargames Atlantic parts in the past) very welcome and the simple matching system makes construction a joy. Match the lettered parts together and you’re good to go. S = shouldered, R = relaxed, and H = hip; we would really welcome this on all of WA’s releases! The varied guns also have the same lettering system to ensure a great fit.

Shoulder pads are added, a huge range of helmeted or bare heads, various pouches and grenades, and you can give a set of field binoculars to a squad member; these have a unique set of arms to hold them.

We really like this set and the final models look extremely slick and well realised. They’ll be quite versatile too, fitting into many sci-fi settings (and clearly scaled to fit 40k, though now rather small compared to the Primaris Marine upgrades GW’s introduced) and the parts will be useful in conversions and kitbashes you might want to make.