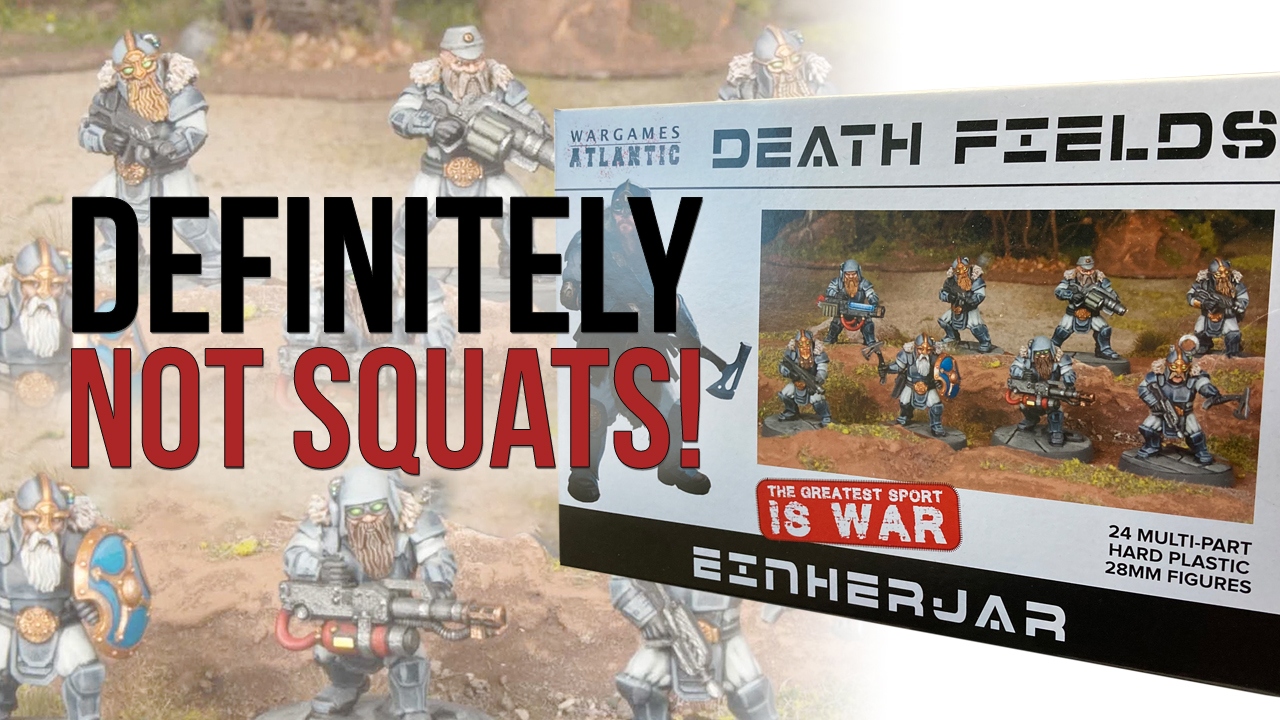 We’re opening up a new box of Death Fields models today. Inside are 24 multi-part, hard plastic, 28mm minis, ready to partake in the greatest sport. We’re as surprised as you probably are that Wargames Atlantic has invested what must be a sizable amount of money and time investment in a range of miniatures devoted to lacrosse, but we suppose the public gets what the public wants and … um, wait, I’m being told that it’s actually war. The greatest sport is war… 2020 really has been a rough one, hasn’t it?

And, yes, it must be admitted, to some extent this rambling intro is in place to stall having to try and correctly pronounce the name of these stout space warriors. Let’s just commit, say Einherjar with a soft J, and as much confidence as possible, hope that people who know better will forgive us, and dig inside the box.

And inside are eight identical frames, each containing enough parts to build three Einherjar with a wide range of options. And we mean a wide range! Each frame will leave you with ten unusued heads, so that’s 80 spares to throw into your bits box from the full set. The generosity isn’t limited to heads either, tons of weapon options and extras are available.

But first, let’s address the elephant in the room – yes, these models will certainly be a great proxy in place of Games Workshop’s mostly thrown into the archive range of Squats, AKA Space Dwarfs. But, while there are some elements of crossover and style, for the most part these Wargames Atlantic Einherjar have their own distinctive feel and design aesthetic. We like that – it would have been easy to do a more direct rip off, but there’s something cool about these models in a world of their own.

The armour and weapons seem a little more slick, refined, and clean – they’ll fit into grim dark worlds but they’re closer to Star Trek or Star Wars than 40k to some degree. Armour panels are sharp, placed over jumpsuit type undergarments, weapons are fairly refined too with the rifles, grenade launchers, flame weapons and plasma blasters taking design cues from all kinds of things. It may be that it was a recent watch but the M41A Pulse Rifle from Aliens springs to mind.

It’s not just ranged weapons though, there are axes and shields available too, though in more limited supplies – just one shield per frame. The axes look great and are, again, quite a distinct design choice for the Einherjar with their sharp lined multi-part construction and cut out heads giving them the look of a modern military hatchet.

Because of all these parts, along with other pouches, sidearms, comms packs, and a horn, you can easily create a multitude of Squats.. er we mean Space Dwarves, we mean Einherjar!

The build process is generally easy enough, but there are some points where the fit of parts makes things trickier, or to be more exact, the lack of fit. No instructions means some guess work for how certain weapons join to the off-hand. We think that we got it right but even then, we felt like they didn’t quite line up correctly. Not the worst thing, but it makes construction slightly troublesome. There’s also an issue with the fur ruffs that can be added. These are optional but certainly cool. However, we found that they really don’t work well with some heads, making it basically impossible to fix some in place correctly (with the neck meeting the torso) without some trimming. That’s not great.

But, it doesn’t stop this kit from offering a great range of models and at a really good price. The box is just £25 ($33 US) and if you buy multiples from the Wargames Atlantic website the per-model price drops below £1 per model. Not bad at all!