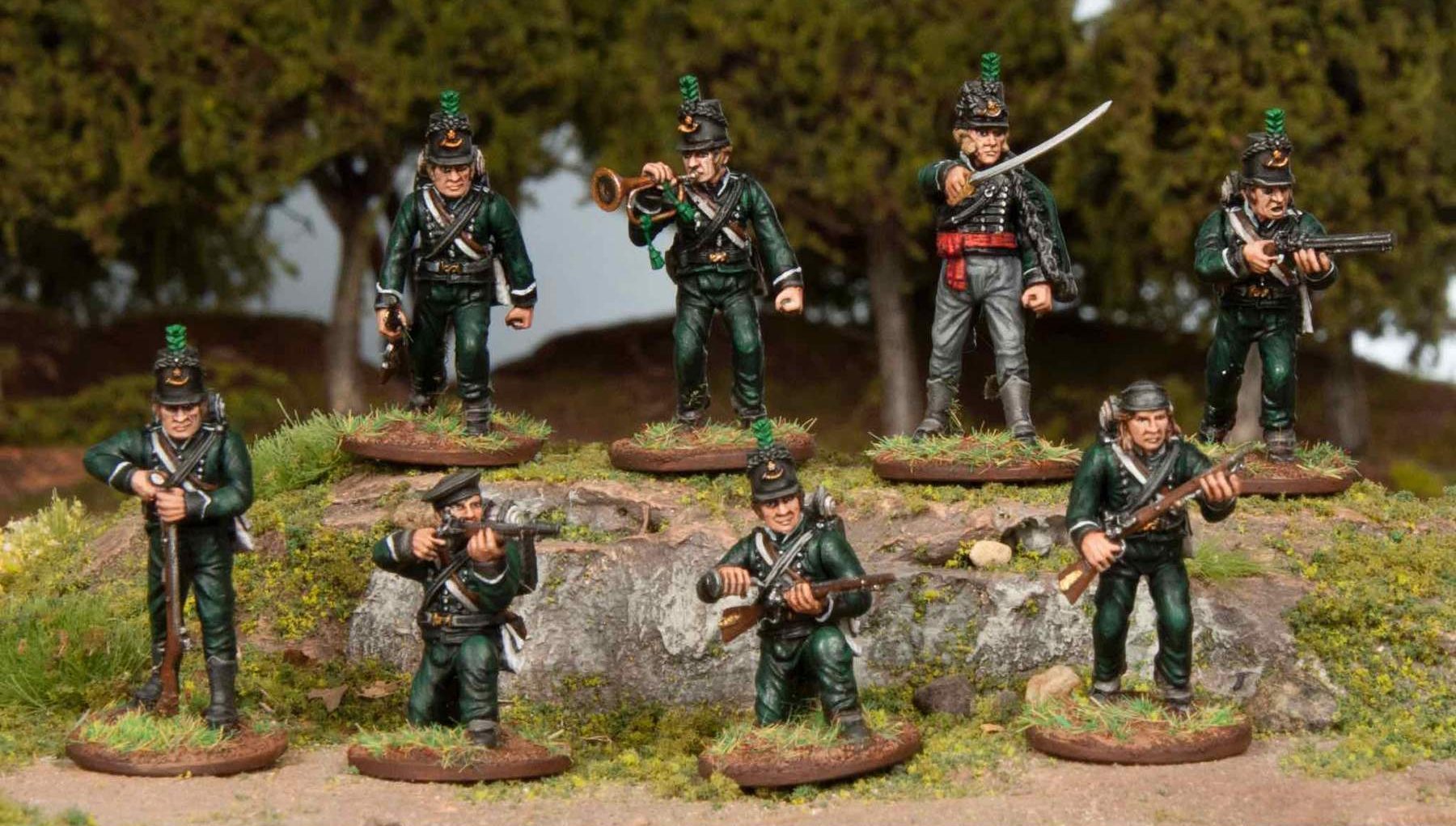 Taking clear inspiration from Sharpe, Wargames Atlantic’s British Riflemen feature some likenesses that fans are sure to enjoy. But before we go down the foxhole of Sharpe nostalgia let’s examine the box set more closely.

Part of their Napoleon’s Wars range, these Riflemen are a generous set of 32 multi-part, hard plastic, highly detailed 28mm figures. The frames are the focus (the only thing included in the box) and each one has the plethora of options we’ve come to expect from Wargames Atlantic.

Three leg and torso pieces are combined on each frame, one in a crouched pose and two on the advance. A fourth figure comprises a set of more upright legs with three different torso options that can be used to build another regular rifleman, an officer, or an officer with a jacket. This range of options instantly gives you the chance to field a fantastic looking unit or build dynamic models for use in smaller-scale battles.

Sculpting and casting are good, and the crisp details show off the on-campaign packs and equipment stowed at the waist behind them, including a powder horn. Three knapsacks are optional extras, as are sword bayonets that can be attached to the hip. That alone is a good amount of detail and we’ve not even talked weapons and heads!

Four heads with standard shakos and another officer’s shako are on each frame but this is where we loop back to our opening talk of Sharpe. There are also a second lot of five other heads, with forage caps, a bandana option, and two unadorned heads that bear a striking resemblance to Daragh O’Malley and Sean Bean – AKA Patrick Harper and Richard Sharpe. This is an addition that will add real value and character to the set if you’re a fan of the series.

Should you want to build Harper you also get the option of his favoured Nock gun and we’ve done just that, adding it and his doppelganger head to the kneeling pose. The rest of the models have Baker rifles and there are options for firing and loading. We built our Sharpe reloading, to show off the detail of the rifle and powder horn arms, but we suspect Sean Bean’s never had to reload a weapon in his life, instead of calling upon his innate machismo and charm until the weapon miraculously readies itself to fire once more!

Before we get lost in our Sharpe speculation, we’ll also mention that a bugle arm is included, as is a handy tassel to add to the waist of your chosen officer, and we think these are pretty splendid options for any British Napoleonic army.

Compared to existing ranges the Wargames Atlantic models skew a little small. They’ll fit well with Perry plastics and your preference between those two sets will, perhaps, come down to how dynamic you want your poses. Once you bring in Warlord Games’ Napoleonics the Wargames Atlantic figures start to look rather dwarfed, which is something to bear in mind, should you get tempted to mix these models in with a set such as the Black Powder 95th Rifles.