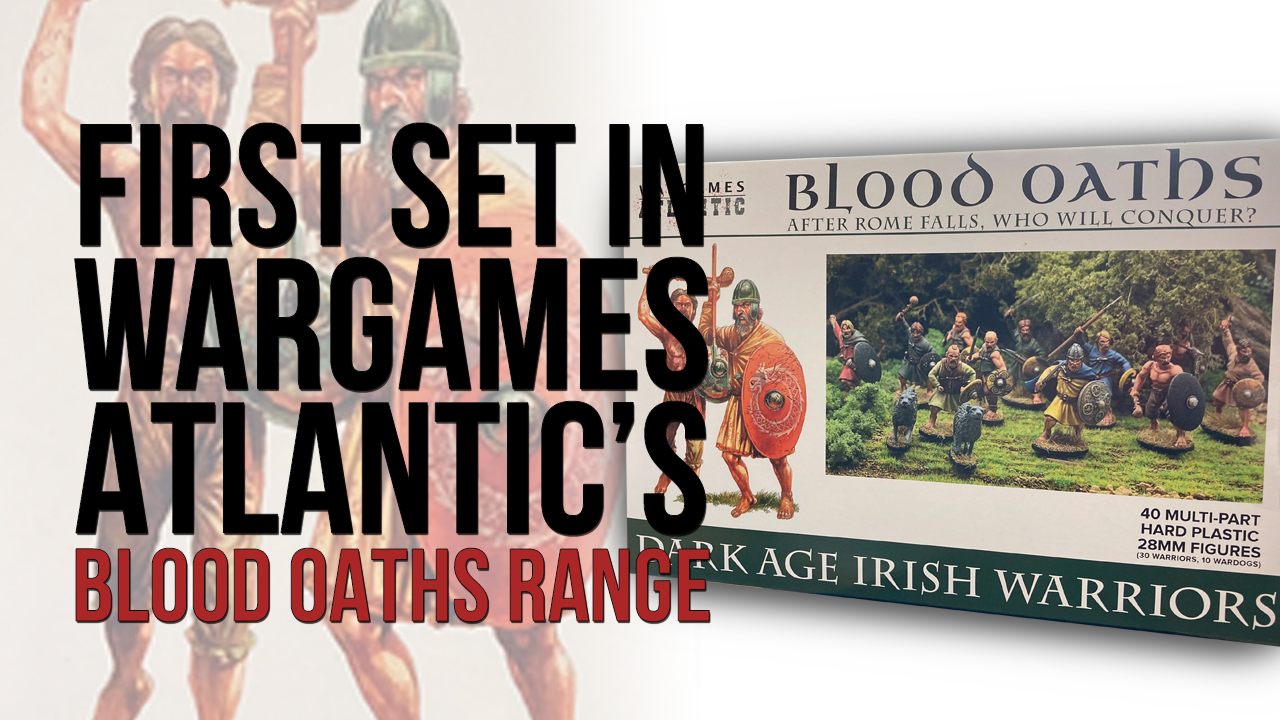 As the proud owner of a Dark Age Irish army and currently in the process of collecting more warbands to refight the classic Irish battle of Clontarf, I was particularly pleased to see this new box of multi-pose plastic miniatures drop through my letterbox for review. The advertising blurb declares that you get enough parts to make 30 warriors and 10 Irish wolfhounds, so what do you actually get for your money?

Inside the box you will find five identical sprues, each one containing six warrior bodies with legs and left arm attached. Three of these bodies are depicted in a knee length tunic, one bare-chested with trousers, one in waistcoat and trousers and one with a waistcoat over his knee length tunic. There are ten separate heads and sixteen different right arms, modelled holding a variety of weapons, including spears, swords and slings, as well as a horn to make a musician and an arm pointing, presumably to create a noble or commander. There are also nine small buckler style shields as well as six large round ones and one oval wicker shield. Most of the shields have flat faces and are thus suitable for painting your own designs or to use transfers to decorate them. There are some nice touches here, with one of the shields coming with a raised Celtic design on it and another modelled to look as though the holder is carrying extra javelins. There are also two cloaks that can be added to your warriors as well as a spare dagger and scabbards to attach to the belts of those you choose to be wielding a sword. Finally on each sprue are two war dogs, each modelled in two halves so you can mix them up. The dogs themselves are nicely designed, with deep fur that will allow them to be easily drybrushed. My only problem with them is the numbers. With two on each sprue, you get ten in a box meaning that if I buy four or five boxes to create my Clontarf army, I will end up with forty or fifty dogs! One on a sprue might have been sufficient, but this is nit picking really, as the lads from the club have already stolen some of the dogs to add to their Napoleonic command bases and civilian vignettes, so I am sure they will not go to waste. Unlike some plastic boxed sets, bases are not included in this box, but again this is a fairly minor issue as most people use their own bases anyway

The tunic and waistcoat array shown on these models was very distinctively Irish and was worn by common soldiers from the Dark Ages all the way to the Elizabethan era, making this a very versatile boxed set. The variety of head options and weapons allow you to make every miniature different whilst also allowing you to make skirmishers as well as warband warriors. This is a really nice boxed set and well worth a look if Irish armies are your thing.