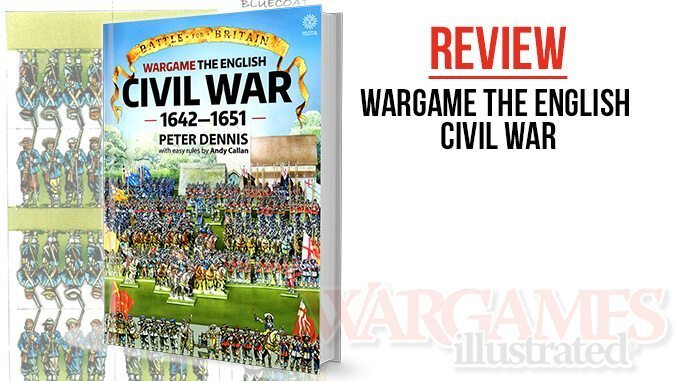 Right, first things first, I have not ‘lost it’. It was just that whilst at Salute I found myself drawn to a book entitled Wargame the English Civil War 1642 -1651 by the well known historical illustrator Peter Dennis.

I’m not really sure what I was expecting, but when I opened and started to read the book, I was ‘hooked’.

Briefly Peter Dennis has created a collection of images featuring English Civil War infantry, cavalry, dragoons and artillery as well as a selection of buildings, trees, even roads, but they’re not just illustrations, oh no. They are cleverly designed, paper soldiers!

I know it sounds crazy but the more I looked at the illustrations and read the two sets of easy rules written by Andy Callan, the more I found myself wanting to give this concept a try.

OK, its not a new idea, paper soldiers date back to the early 18th century, and websites like The Junior General have been offering cartoon-like images suitable for printing out paper soldiers for several years, but Peter Dennis has improved on the basic idea in many ways.

The illustrations themselves reflect the high standard of Peter’s more conventional historical illustration, and he has incorporated some very clever ideas.

The troops are designed in what may best be described as concertina strips.

These concertina strips are then glued together to create a unit in three ranks. The image is carefully trimmed around and then glued to a base.

Obviously you don’t cut out the images in the book, as its basically a source book. Instead, having purchased your copy of the book, you’re free to scan in or copy the images for your own use, and then print out as many sheets as you want.

Instructions for making up the paper soldiers are clear and simple, and the end results really do have a charm and realism that is infectious.

PROS: An original concept extremely well-executed. Lets face it the idea of being able to create ready painted unlimited forces, relatively quickly for just £12.95 (RRP) plus the cost of some inkjet prints is an attractive one, and its actually great fun making them.

CONS: If you buy the book, then obviously you’re prepared to give the concept a chance, and on that basis the figures etc., are as good as you could reasonably expect. Looking for a ‘con’, I would only say that the buildings are to a different scale to the figures. Resolving this isn’t difficult though; you just have to scale the pages containing the buildings up by about 10%, but you will have to get them printed on an A3 inkjet or laser printer.

SCOPE: Obviously you cannot combine them with anything else, but within the philosophy and concept behind the book, the scope, in terms of creating your forces, is, literally unlimited.

Wargame the English Civil War is part of the ‘Battle for Britain’ series which also includes ‘1066’ and ‘Wars of the Roses’.

Prices for the book vary considerably. The recommended retail price is around £12.95, but if you shop around or go online, you’ll be able to pick it up for £9 – £10, which for what is effectively an infinite sized, ready painted paper army is pretty good value.

Special thanks to Peter for supplying me with photographs from the book so that I could complete my brief review on time, otherwise the Editor would still be waiting for me to make up my armies.

It wouldn’t be right to conclude the review without mention of Andy Callan’s ECW rules. There is one set comprising just four pages plus a two-page playsheet and also three scenarios, but for the total, total beginner there is a two page set of “Rules for Absolute Beginners”. So even more value for money.

I know that paper soldiers won’t be to everyone’s taste, but I for one just found the entire concept really fun and the forces were easy and quick to build. In conclusion, I can only say… “Don’t knock it until you’ve tried it”.