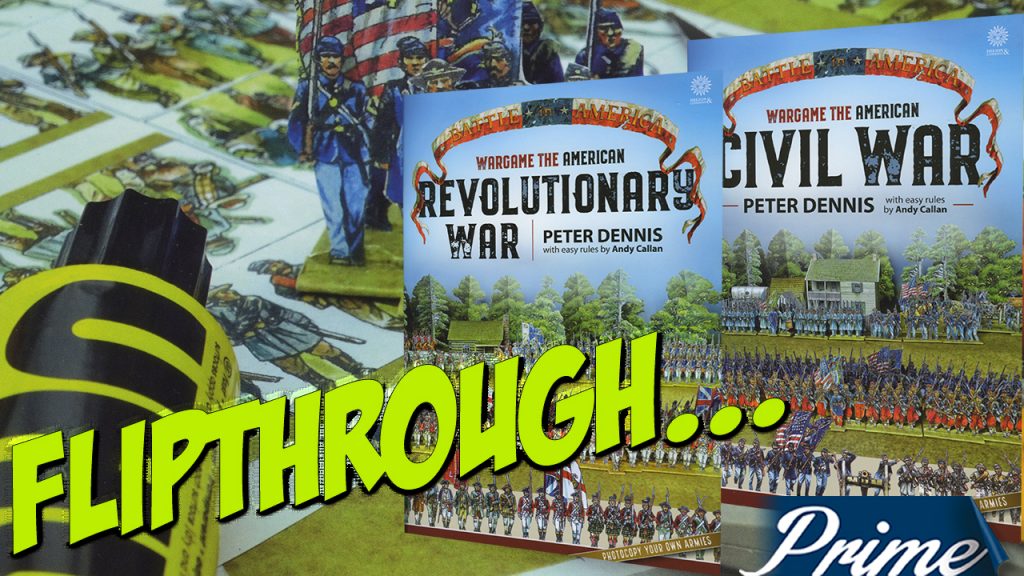 Having already created four paper soldier wargaming books for Battle in Britain, Peter Dennis and Helion Books have ventured further afield and created two new books under the heading of Battle In America. The books feature the classic American wars, the Civil War and Revolutionary War.

The Revolutionary War book, like all in the range, is designed to allow you to construct and game with paper soldiers. There is a brief introduction to the core idea, followed by an overview of the soldiers who fought in the war and then we are into the pages of troops. These are designed to be photocopied onto high quality paper rather than used straight out of the book.

Each ‘army’ section contains examples of the variety of troop types who fought during the war, from the early period to the later, and encompasses all arms of the services, whether it is infantry, cavalry or artillery. Mounted and dismounted command strips are included, with named commanders who may be partially ‘posed’ by choosing which arm to leave on the figure! All the most suitable flags are included, some of which are for particular units. The different nations who fought are also here, including the Hessians. The battlefield itself is catered for, with the ability to copy and construct typical buildings, terrain and trees. In addition, there is a set of simple to use rules by Andy Callan that enables you to field your paper armies in action, plus you can construct paper dice and suitable markers, and add in Native Americans as British allies or for a different game. There are three scenarios included, plus a very, very simplified version of the rules for those just starting out.

The American Civil War book follows a similar format to the previous one, adding in images of the relevant troops types for both sides, including the colourful zouaves, the African-American units of the Union, the ‘on campaign’ appearance of some of the Confederates, infantry command units, standards, casualty figures and markers. A useful part are the figures in greatcoats, allowing you to field winter units.

Once again, there are two sets of rules, one a comprehensive but simple set for the more experienced gamer and the other a more simplified introductory game. The terrain included has houses, fences, trees and tents, allowing you to populate your battlefield and turn the bare tabletop into a more scenic environment.

Those who are a fan of these books will recognize the style and be already persuaded to buy. However, these are perfect ‘starters’ for those new to wargaming or the period who perhaps want to try them out before investing in other types of miniatures. Given the quality of the ‘paperboys’ included though, one could quite happily game with these for as long as the copier cartridge and high quality paper supplies last!