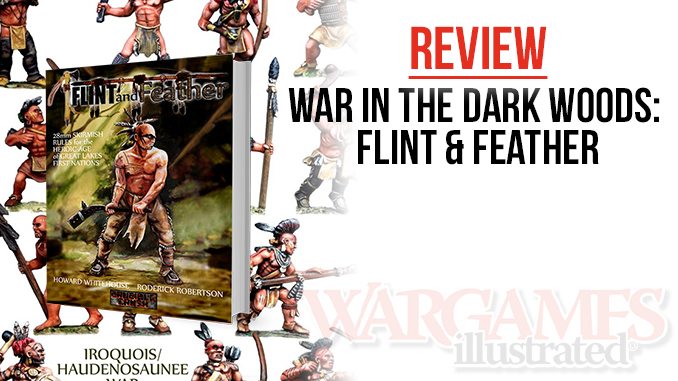 It was with something approaching glee when I received a Beta copy of the new Flint and Feather rules by Howard Whitehouse and Roderick Robertson, and some lovely accompanying figures from Crucible Crush. I hardly had the package open before galloping down to the WB3D Gamers Club to play a game and solicit the opinions of some ‘hungry for adventure’ wargamers. Flint and Feather, for those that do not know, is a set of rules for fighting skirmish battles between bands of Indians in the deep woods of pre-contact North America, and in particular between the Huron and Iroquois tribes. The rules were inspired by Joseph Boyden’s brilliant novel The Orenda, Indian mythology, and some solid historical research. We could not wait to try them out, and what follows is our report written by Club member Karl Lowthian:
“Two of us are eagerly awaiting our kick-starter packs for Flint and Feather, so we of course were interested in seeing how the rules work. Having played a number of war-band style games such as Frostgrave, Daisho, and Bloodeagle, the thought of a small Indian war-band to charge about with appealed. Another player has a penchant for Mr Whitehouse’s rules so we had a merry band of players. Our Club ‘tree herder’ Lawrence Coxon has an impressive terrain collection, which once deployed created a cinematic scene worthy of Last of the Mohicans: a heavily forested area with a river running through was to be our battleground!

We used stats for the warriors from the pre-set in the beta book so each band had a war leader, 2 companions, a veteran, and 6 war bearers (normal braves) – word of warning; when pointing up you really need to take into account the use of armour and shields which could make all the difference in a game (albeit not for me this time with my woeful tactics and dice rolling). You should, however, play ‘what you see is what you get’ to obtain the right feel for the game.

We ran a simple meeting engagement for the playtest, but here I think once scenarios are written they will greatly enhance the game with the campaign component and developing and nursing a war band. Each side can place furs on the table, which become booty tokens that if captured give you a greater ability to recruit, retain, and develop your war-band for future games. However, being blood thirsty we skipped this and went for the kill and to test the mechanisms. Thus, each side split into two groups on their side of the river and closed for action. My group of 5 not-so-braves legged it for the ford, dodging and returning bow fire, which was a distraction more than anything else.

The activation role and table are a good idea and make you think about how to use the groups and war band as a whole. For example, I decided to use bowmen to snipe at an oncoming war band to slow them down while 4 warriors crossed the ford. Good idea you may say, but I had left one chap behind and owing to poor activation rolls was not able to activate him until the other groups reached him and motivated him to get going. By that time my warriors had charged headlong against an opposing war band. The fighting was swift but it left 1 of my warriors dead and another wounded, then when falling back a second enemy charged my motley band, slaughtering the group. The second group for my tribe were at the other side of the ford and held the advantage – almost a Huron standoff! – so we called it a day, and reckoned with 4 dead or mortally wounded the heart would go out of the fight. In the end a victory of 95 points to 25 proved decisive!

Now to the rules; the combat mechanism is good fun, though we thought to make it better when we play with our figures in future, making stats cards with pics of each figure so you recognise each mini easily, perhaps in card protectors; however this was a first game with proxies. The spotting and movement rules worked well and we also liked the reaction in between actions of the opposing player, think overwatch or interrupt actions here. We also worked through the combat process quite well. I think though where the rules could be clearer is the section on page 26 (“Rolling the Dice”) with the extended paragraph on rolling the dice; there is a lot of good key info in that paragraph that is a bit lost in the text. For a first game or to help a novice a flow chart would work very well in this section rather than just text.

Overall we enjoyed the game and once all our war-parties are painted, we will get some more fun out of this game and that is without yet adding in shamen. Indeed, we were quite animated when we realised we could shape shift our warriors into animal forms. Now who makes 28mm owls and turtles?”

The others in our game agreed with Karl with one adding that he would like to see more information on the quick play sheets for weapon ranges and base factors of the different troop grades. In addition, he liked that the basic quality troops got random reaction combat cards making it difficult to predict what they would do. Our other player agreed with the need to clarify the text on p26 and opted for a flowchart too, but everyone involved enjoyed the card system for combat. On shooting, we concluded that it worked as expected not inflicting major damage but acting more like an irritating problem to solve. The magic element is also a very enjoyable optional component to skirmishing and integrates well with the game play. We all agreed, however, that where Flint and Feathers will fly or fail is in the Campaign game. Winning skirmishes brings wealth in furs that are then spent in acquiring more and better warriors to your war-band. This is a simple mechanism and easy to keep records on as you progress, or not if you aren’t up to the mark as a war-chief.

We all agreed that the figures produced by Crucible Crush to accompany the game are superb. They are full of character and in dynamic action poses suitable for a fast flowing skirmish game. The sculpts are also clean with negligible mould lines and packed full of little details that set off the figures perfectly. All in all they are a joy to paint, though it should be noted that a great paint job does not seem to result in a corresponding increase in bravery! Finally, in addition to the two war bands, Crucible Crush have produced some outstanding characters from Indian mythology to take this game to a new level. They are a massive bear, a stone giant, a serpent, and a disembodied head, all of which you would not like to meet on a dark night in a dripping, North American forest. The only negative with regard to the sculpts is a lack of fur markers that are such an important element of the game. Given the skill deployed on every aspect of Flint and Feather then it surely would not take much to rectify this glaring omission. Nevertheless, Flint and Feather will become a regular game in the WB3D Gamer schedule, you can bank some furs on that!