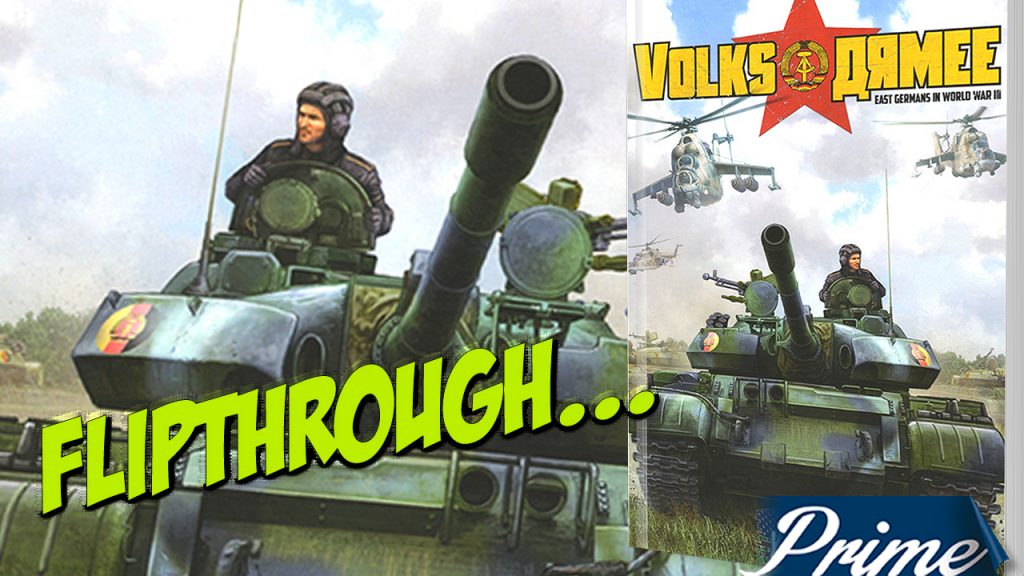 The latest supplement to be released for Team Yankee allows you to field the Nationale Volksarmee, the East German army, in support of their Warsaw Pact masters, the Soviets. Able to field a range of weapons and equipment based upon Soviet designs, the Volksarmee may look a little like the Soviet forces but are different enough to be a distinct force.

The book uses the same format as other releases, providing maps and information on the progress of the Third World War in Europe and introduces a ‘guiding’ character, Oberleutnant Fritz Fischer of 9. Panzer Division, whose actions act as the framework to introduce the different elements in the book.

The main addition to the equipment available in this supplement is the T-55AM2 Panzer Bataillon, which allows players to field the same and outlines the Bataillon and Kompanie organization. The points costs and stats for these armoured fighting vehicles are also shown.

Other main battle tank shown in the supplement is the T-72M, the somewhat cheaper to build version of the Soviet original. Lacking some of the higher technology of the Soviet version, the T-72M is still able to take some serious damage, whilst hitting hard when it needs to. It is also a little lighter on points cost, meaning you can field even more of these ‘bazooka skirted’ versions of the Soviet T-72.

The remainder of the information in the supplement focuses on variations on the vehicles and weapons already to be found in the Soviet arsenal, with some minor twists to make them more appropriate for use by the NVA but largely the same. The main changes are in armour and to hit values, which has had an effect upon the points cost for some units. However, the East German infantry miniatures look really impressive, as do the paint schemes for the various vehicles, as shown in the excellent painting guide towards the rear of the book, which shows how to field an NVA force as an alternative to the ‘standard’ Soviet one.

One particularly eye-catching part of the book is, as always, the quality of the artwork and photographs, plus the clarity of the unit organization charts and the level of written detail which shows the usual high level of research.

One particularly welcome aspect of the supplement is the inclusion of the various unit cards with the book, although the T-55AM2 stats can only be found in the boxed set of resin vehicles which will be available from Battlefront fairly soon.

Overall, this is a supplement that allows you to field a valid alternative force using a number of the current releases in plastic from Battlefront. The fact that the T-55AM2 and T-72M are introduced into the game via this supplement also allows interested players to create other Warsaw Pact forces, such as Polish and Czechoslovakian, for use in the game with just a little extra research.