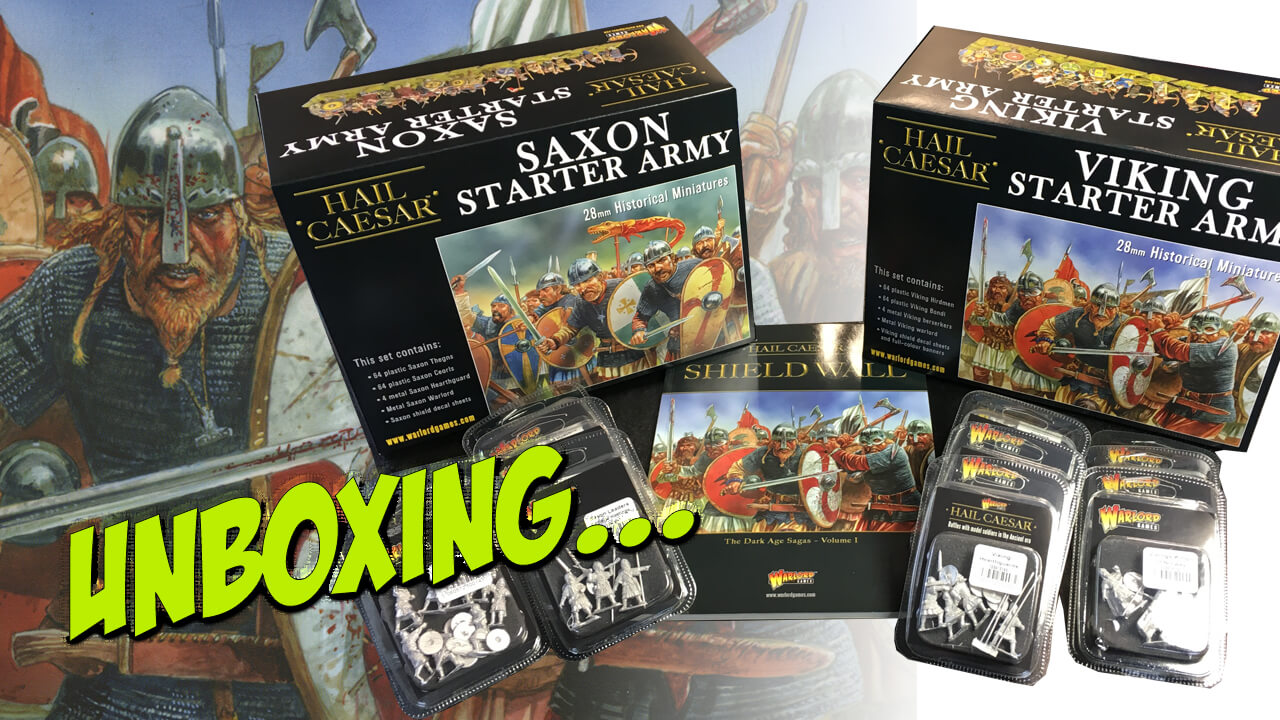 Warlord Games continue to be keen suppliers of ‘budget’ armies for their new rules sets and supplements. Two of their latest products are starter armies for Vikings and Saxons, designed to be used with the new Shieldwall book for Hail Caesar.

These really are bumper boxes of plastic miniatures, which may be assembled as you wish. The Viking box consists of enough paired frames to create 64 Viking Hirdmen, the professional soldiers of a Viking army, and 64 Bondi, the ‘part time’ warriors drawn from the ranks of farmers and craftsmen. The Saxon army follows the same format, with enough frames to create 64 Thegns, the wealthy noblemen with training and good quality equipment, and 64 Ceorls, the freemen of the Saxon system.

These frames are basically provided in pairs and come from Warlord’s partnership with Wargames Factory. One frame contains the bodies and open handed arms and the other consists of heads, weapons and bases. There are plenty of options available for those with a desire to create a variety of units, from archers to spearmen.

In addition to all that plastic goodness, there is a blister pack in each box to add special troops and a command figure. The Viking version contains four metal berserker figures and a Warlord, whilst the Saxon box comes with four metal Hearthguard and the Warlord they have sworn to defend.

The boxed sets also include double-sided A5 information leaflets which have a graphic and guide to the contents of each of the two frames, plus a brief outline of the troop types and full colour banners which may be cut out for use with the figures. There are also sheets of waterslide decals to fit the shields supplied with the frames.

In order to bolster your plastic armies, Warlord have released a number of blister packs of metal miniatures. These range from extra Huscarls and Hearthguard to warriors and kings from a number of named nations.

As always, these starter armies are great value and provide gamers with the core of a force that they can assemble as they wish. The addition of the metal models in the main box and via the blisters allows for some useful customization and unit options. If you’ve never tried the Dark Age period or are looking for a new army or two, then this is an excellent starting point.