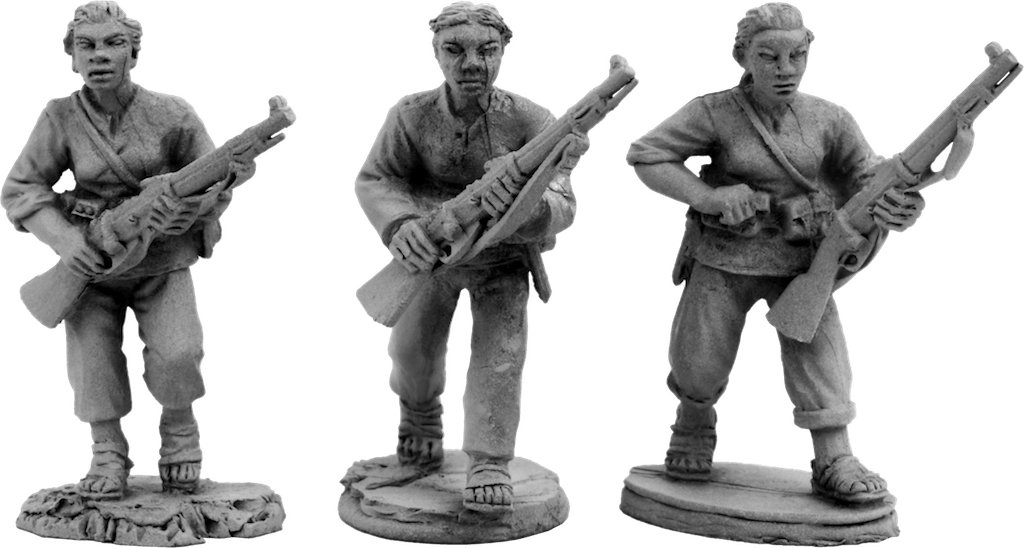 We’ve got some new models from Gringo 40s on the review table today – Viet Cong Female Soldiers from their Vietnam War 1968 range and a Mayan Princess in Elaborate Headdress from the Mesoamerican range.

Let’s get into the Viet Cong (VC) first – these are four 28mm metal models, cast to a good quality, representing some of the VC’s numerous female soldiers from the Vietnam War.

The three basic VC are cast as one-piece models while the VC/NVA Radio Operator has a fair few bits! She is two-piece miniature while the table and radio element that she is crouched by is made of six different pieces:

We drilled a pin hole to make the aerial connection more secure, but the overall build isn’t too bad – maybe a bit fiddly for those with larger hands. If you’re one of those people we recommend tweezers to get the parts in place.

The three one-part models are all armed with the five-shot, bolt action, Mosin-Nagant rifles that were common in the VC. Two are at different paces of advance while another is reloading. It’s great to have diverse options to add to the VC and these are fine quality, combat ready sculpts at the very reasonable price of £1.75 ($2.25 USD) each.

The Radio Operator is a more expensive kit at £3.95 ($5.00 USD) but for that you get a mini diorama of the operator taking call notes while using her Type 63 backpack radio placed on the map table. A great piece for adding detail and character to your army, painting as a display model or, perhaps, the inspiration for starting a VC collection.

We are so conflicted on this one-piece metal model. The sculpting is excellent – sharp details convey some of the stylised, decorative elements of Mayan culture, and there are some extremely fine elements such as the facial jewellery, designed to test even the most steady-handed painters. This we really like.

Her body shape, however, throws us a bit. It might fit a model of a 21st century Vegas showgirl, not so much on a powerful warrior Princess. When seen beside the practical, battle ready Vietcong it’s even more obvious – the Mayan Princess looks more like someone costumed as a Mayan.

This will hold appeal to some, of course, but it really makes her look out of place in what is an otherwise historically accurate looking range. Yes, it’s possible that there was a Mayan Princess who had a slender, busty body. No, there’s no way that there were bras giving this level of perky lift in the time BC!