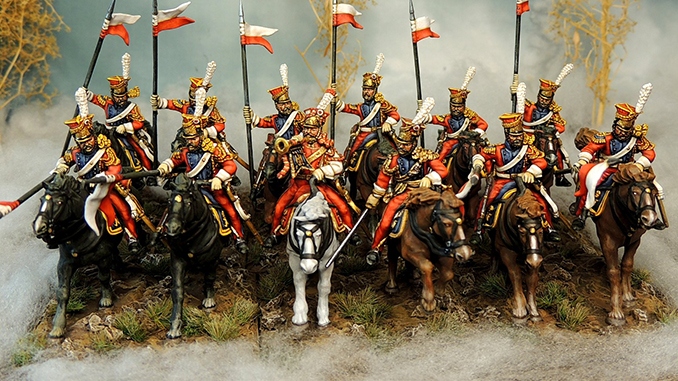 With the release of this latest set in their Napoleonic Wars range Victrix declared “We think this is one of our greatest sets to date, the detail is superb and the figures are packed with animation and character.” And indeed they are both highly detailed and characterful. Let’s take a closer look.

From this set of four frames for around £27 you can make 12 Imperial Guard Lancers, these were the Polish (blue) and Dutch (red) regiments who fought with distinction for Napoleon from the Peninsula to Waterloo.

Three identical frames each feature three different torsos (two with legs attached) and three horse bodies. Although there are 12 heads on each sprue, there are only two different types; one with a full dress (with plume) czapka the other with covered campaign dress czapka. This gives the figures an ‘identical twin’ (or sextuplet ) look, but for a face that’s only three millimetres high, viewed from a metre above the table, that’s not really a problem.

Other components on the frame include arms with lances and pennants attached, separate arms with drawn swords, sheathed swords, carbines and valises, these last to fit on the rear of the horses’ saddles.

The other frame in the pack is the slightly smaller ‘Command’ frame. Here you will find three more different horses as well as an ‘Officer’ and ‘Trumpeter’ body.

Unlike some other plastics manufacturers Victrix sets tend to have prescribed parts to go specifically with other parts, so less mix-and-match, although I have no problem with that and although off-putting on first glance the ‘on header card’ instructions for ‘what bit fits with what bit’ make it clear, and following the instructions leads to the creation of some great looking figures, which – as the accompanying photos show – can paint-up beautifully, something which is helped by the crisp detail on the uniforms and saddlery.