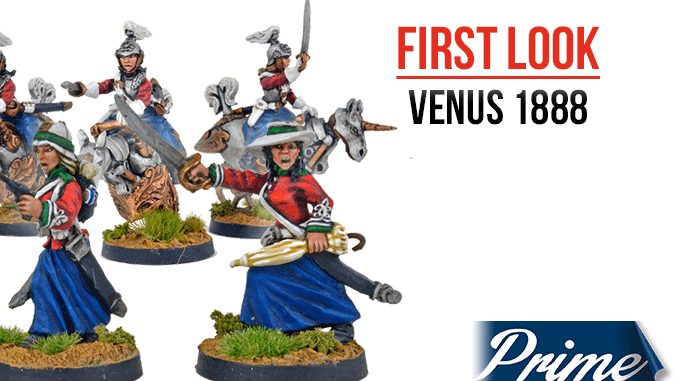 An upcoming range from Dragon Bait Miniatures, these female troops are intended to represent British Imperial Forces during their efforts to conquer Venus in an alternate, Victorian Science Fiction reality. The premise appears to be that male soldiers are unable to campaign on the planet for long due to various debilitating effects, so the women of the Empire have to take up the strain.

Each basic Infantry miniature represents a female soldier in the red jacket and 1871 equipment most associated with the British army of the Victorian era, complete with Martini-Henry rifle.

The main concession to the fact that these are female troops are the wearing of long skirts (right down to the ankle of course!) and, given their service in a hot climate, each soldier carries a parasol tied to their pack in place of a greatcoat.

A favourite figure amongst those sent to us is the officer in the wide brimmed hat, pointing the way with upraised sword in one hand and carrying her parasol in the other.

There are also some great looking Cavalry mounted on clockwork mounts which sport a unicorn-like horn. The uniforms owe much to the Lifeguard / Household Cavalry, albeit again with long skirts rather than jodhpurs.

A favourite figure here is the bugler looking to her right but all the miniatures are dynamically posed, giving a real sense of a unit ‘at the charge’.

These miniatures will be part of a Kickstarter campaign from Dragon Bait Miniatures, allowing the sculpts to be mass-produced rather than created. These are the type of Kickstarters we’re happy to support, as the miniatures already exist and the backers merely have to wait for the castings.

All the miniatures shown were painted by Paul Sanderson for Dragon Bait, and we’d like to thank him and the company’s owner, Joseph S Corsaro, for providing painted miniatures.