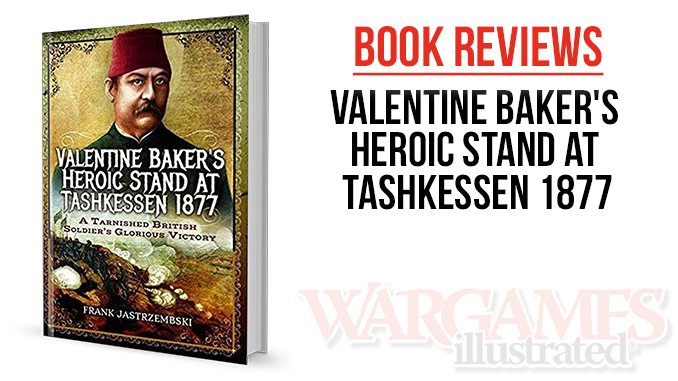 Valentine Baker’s heroic stand at Tashkessen is the latest book by Pen and Sword, comprising 202 pages including index and bibliography with sixteen pages of illustrations. It is the story of how a disgraced British officer sought redemption in the service of the Sultan in the Russo-Turkish War of 1877. Anyone with an interest in the nineteenth century will have heard of Baker, or at least his fall from grace which involved a young lady, a railway carriage, her completing the journey outside the train as it sped through the countryside and him completing twelve months in pokey.

Jastrzembski sets out Baker’s rise to command a hussar regiment and become a confidant of the Prince of Wales before the scandal and fall. The court case is covered in detail as is the subsequent prison sentence and disgrace. The author clearly takes Baker’s side in the matter and quotes Baker’s most recent biographer, a relative, whose work is hagiography. Jastrzembski then indulges in some amateur psychology regarding Baker’s mental state and the reasons for his later actions which we could well do without.

The author recovers well when the action moves to the Balkans and the meat of the book. The armies involved are described in great detail along with their tactics and military philosophies. The background to the campaign is set out and the action is illustrated with a couple of maps. Jastrzembski is good on the war and the conduct of the war, describing the build up and the action very well, though Baker’s part is often overplayed.

Jastrzembski has written an interesting but flawed book. It is well researched but at times it reads as if English is Jastrzembski’s second language though he is US born and with a masters degree from a US university. Some sentences have odd structures and are ambiguous, some are either careless or wilfully obscure. There are far too many unnecessary adjectives many of which look like they were gleaned from a thesaurus and some words are simply wrongly used. For example the author uses “protege” when he means “mentor” and “immorality” appears when the author probably meant “immortality”.   As an example the author writes on page 11 “In Fanny, Baker found a hidden gem; she validated her fortitude and devotion to her husband time and again until her death.”. This alas is not the only example, and some passages have to be read and re-read and even then you occasionally have to deduce the meaning from the surrounding sentences. This lack of proof reading and editing is only one of the ways the author is not well served by his publisher, there is a consistent glitch in the printing where the kerning of words beginning with”fi” runs those two letters together while leaving a gap before the third letter.

The book will be useful to anyone interested in the Victorian army or the Russo – Turkish Wars of the nineteenth century. It doesn’t tell us anything new about Baker or his scandal but it does shed light on the period between jail and El Teb which is usually glossed over by authors. This should be a much better book but it needs better editing and printing and it is a shame that Jastrzembski was not pushed harder by the publishers.