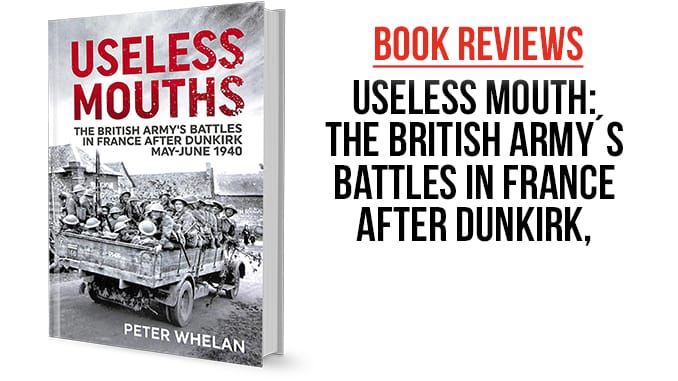 The Battle of France and the Blitzkrieg in the west have been subjects of new hobby supplements for Bolt Action and Chain of Command in the recent past. Thus many a hobbyist´s focus now lies on this campaign. Peter Whelan´s book Useless Mouths describes the battles and engagements of the British Army in May and June 1940 after Operation Dynamo, the evacuation of large proportions of the BEF and other forces from France. As such, the book is a valuable contribution on a largely overlooked historical subject and a well-researched source for any wargamer interested in the subject.

As a primer, Whelan describes the development of the British Army´s supply services, the so-called Lines of Communication (LOC) troops. The author explores the impacts of the various army reforms on the Lines of Communication troops from the 19th century onwards to the Second World War and thus is able to describe their status at the beginning of the war. Whelan then goes on by describing the setup and dispositions of the LOC in France during the Phoney War period all the way to the German breakthrough at Sedan and the subsequent retreats. Then, the underestimated and underreported actions fought by LOC troops are vividly described in great detail. These troops performed well given they neither had combat experience, access to heavy weapon support nor enough training.

The hardback version of the book under review here is 180 pages long and contains a couple of maps, some very rare photographs and a detailed Order of Battle for the remaining British forces which comes in very handy for wargamers. Drawing on the Order of Battle on the one hand and the vivid story on the other, wargamers can create themed forces and custom scenarios for land battles. Peter Whelan´s book therefore can be recommended as a weekend read that is well worth it´s price.