US Infantry Weapons of the Second World War 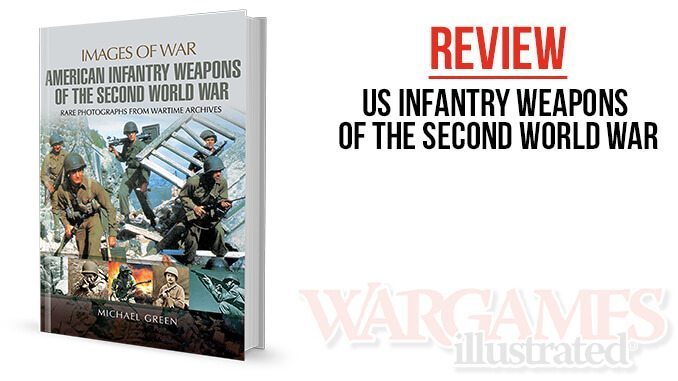 Rats! In my To-Do boxes, I have about 40 undercoated US infantry, a Bolt Action project that barely got started then got shunted into the ‘someday’ file. I had not given them much thought; that is until I opened Michael Green’s US Infantry Weapons of the Second World War from Pen & Sword’s Images of War series.

Green opens his book with a brief overview of US Infantry organization, though that has little to do with what is to follow other than provide some context. He moves quickly on to individual infantry weapons before accounting for crew-served weapons and support weapons. Each section is sub-divided to describe a weapon, with some history and technical specifications. To stop his descriptions from becoming completely dry and dusty, however, Green adds some insightful analysis on a weapon’s effectiveness drawn from US Combat Lessons reports and other sources. After each chapter come the photographs, many of which were taken in combat or in combat situations, while some feature reenactors. It follows that most of the pictures are in black and white, though some are in colour, but that does not detract from them in any way. Green covers all the US infantry weapons, from bayonets to tanks with pistols, rifles, grenades, machine-guns and artillery all thrown in for good measure.

US Infantry Weapons of the Second World War does exactly what it says on the cover, and maybe a bit more. The result is quite impressive. There is enough material here to inform without getting bogged down in detail – there is an internet for that – and it is all neatly arranged. I also enjoyed the selection of photos, and surely a scenario model-maker will take much inspiration from them. All in all, rules-writers and collectors will get good use out of this book, as will any wargamer interested in the US army of World War Two. As for me and my undercoated figures, I have dug them out, put on a Glen Miller CD, and am now looking for the Olive Drab.