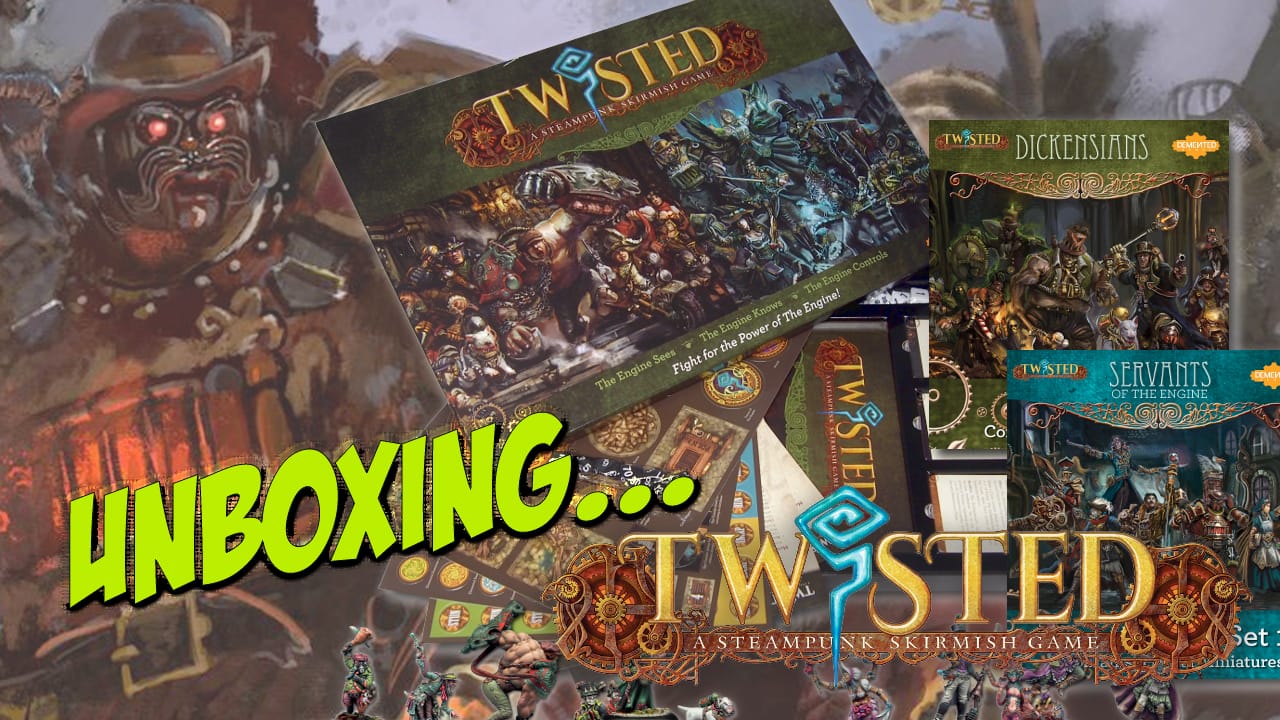 Demented Games of Australia used Kickstarter to produce Twisted, a skirmish level game of characters and their underlings fighting within an alternate Victorian society. The game and miniatures are on general release, and gamers can fight to preserve or dominate the all-knowing Engine, the power behind this altered world.

The box artwork and overall look is of a high standard and very evocative of the background. The book itself contains a wealth of rules and support, complete with the background of the rise of the Engine, the machine buried in the earth which uses ‘nodes’ near the surface to alter / ‘Twist’ human’s into new forms. The book has all the stats and outlines for two factions, the Servants of the Engine and the character based Dickensians, who seek to either defend the Engine or take possession to use it for their own desires. All the rules for movement, shooting, etc. are here, plus campaign rules, scenario set ups and the full list of Alchemantic Mysteries, with Alchemany being the fusion of science and magic which enables the creation of the altered characters and may be used during combat.

Although the book is a weighty tome, it has a useful ‘fold flat’ spine, and there are two excellent playsheets and three punchboard sheets of tokens and templates.

The main ‘action’ deck is based upon the Character Play and Activation Cards. The Character Play cards have all the relevant game related statistics for each of the named characters and their underlings, the Slashers and Shooters who form the basic ‘foot soldiers’ in the game. These are placed at the side of the standard 3’ by 3’ playing area and used for reference.

Character Activation cards contain artwork and the names for each of the miniatures used with the initial game. This deck is shuffled before the game begins, placed face down on the table and drawn from each turn to randomly activate a miniature. Once a character is activated, The Eye of the Engine deck is used during the game to draw one or two cards from it, again at random. The effect noted is used either against your opponent or your own faction, which can be of benefit or a detriment. The Engine is a manipulative force, and has its own agenda, supporting whomever it wishes.

The Alchemancy Invocations deck is used as a reference point for those whom have the ability, or Essence, to ‘cast’ the ‘spells’. Players pick their chosen Invocations and add the cards to their Character Play area. Each card has the cost and details of each spell, plus the relevant token or template that is used when casting.

Lastly, to add something ‘extra’ to games, there is the Tarot of Taxing Tasks, a deck used to add extra opportunities to earn victory points during the game. One of these is drawn at random and added to a player’s faction or Company during the game. They are the equivalent of ‘side quests’ found in popular role playing games, additional tasks that, if performed, help those who may not be able to complete the main goal.

Available in high quality resin or pewter, the miniatures are highly detailed and excellently sculpted, incredibly characterful and almost exact replicas of the fantastic concept artwork.

Boxed Set 1 and 2 contain two balanced forces for the first two factions, Servants and Dickensians, whereas the blister packs consist of many of the named characters which may be added to them or additional examples of the basic warriors. There are two more factions planned for future release, with an Eastern flavour.

High quality production values and some fairly innovative approaches to standard skirmish rules, this is a game with more than a touch of roleplaying. The narrative storytelling element is supported by a varied, detailed background that offers opportunities for a multitude of gaming experiences. An excellent product, from a small company that is one to watch out for in the future.