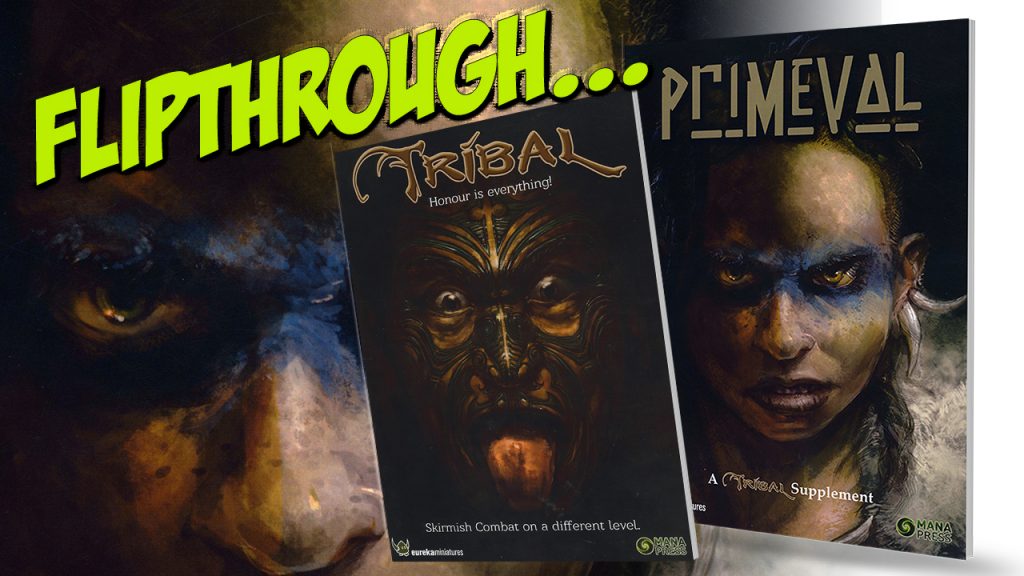 The Tribal rules from Eureka Miniatures and Mana Press have been out for a while but the more recent Primeval supplement adds even more to the game. In this joint flip through, we take a brief look at the core rules and a closer look at this first of hopefully many supplements.

The Tribal system is a skirmish level wargame but operates in a unique way. First of all, Honour is everything, so every combat, every action, every death, is about gaining Honour for your tribe, which is pretty much the only way to win the game.

Secondly, the game does away with the traditional dice and tape measures – both players use a deck of standard playing cards for both movement and resolving actions. Each card has a suitable value, with Jokers and picture cards being worth more. Suits are also important.

The game includes a number of scenarios that would be typical of those events that would characterize the life of a tribe or similar group. There are rules for close and ranged combat, but also dirty tricks, which look good but cost you honour.

A number of historical settings and cultures are outlined in the game, including Maori, Aztecs, Vikings and Roman Gladiators. Each have their own unique rules, skills, weaponry and motivations for seeking to gain Honour.

The Primeval book builds upon the core rules by adding a whole new setting, taking players back to early mankind and the first tribes.

In addition to new skills, we get new tribes such as the Neanderthals, with their own unique skills, and the Cro-Magnons, complete with suitable scenarios for facing them off against each other.

A new tribe to us, and seemingly to science, are the Denisovians, with their own unique abilities and background. Possibly the ancestors of the aboriginal peoples of Australia, these were perhaps the most interesting choice to us, as they are an such unknown quantity.

Lastly, a more fantastical tribe is included based upon the Hominids, the very earliest examples of ‘man’, who owe more to the ape than the later versions. With three different varieties, these are a tribe for those who might be looking for a more feral approach.

In addition to the new tribes, there are rules for using animals in the game, albeit the type of fauna to be found during pre-historic times. Here we deal with Packs and herds rather than tribes, with options for both prey and predator to be fielded in games.

The beasts are separated into different types, and a full ‘bestiary’ is provided with all the game stats you will need. There are also game ideas and scenarios, contained in ‘The Hunt’ section, allowing you to gain that all-important ‘Honour’ through hunting down and overcoming the creatures you need to feed your family or those who seek to feed upon you and yours!

Both the core rulebook, and the supplement, pack an awful lot into a relatively low page count. Yet the rules seem simple to learn and the number of figures required to play is fairly low. Eureka already have many of the miniatures needed to use these rules but there is nothing to stop you shopping around and using those from others. This is an interesting take on the whole low-level skirmish idea and there are more supplements planned for the future, including the worlds of Gang Warfare and Mob Rule.