Trent Miniatures: Figures For The 1790s 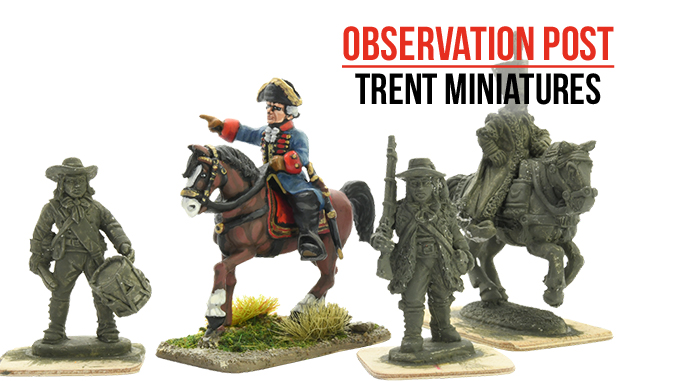 The modus operandi of Trent Miniatures is 28mm figures for the 1790s. Their ranges include: The French Revolutionary Wars (1796 – 1800), Internal France, Otterman Empire and… musicians. We have some new samples from all of those ranges for you to look at.

First up (seen below) are a some Austrian generals for the French Revolutionary Wars. Trent already provide several packs of Austrians for their period and these three new mounted Generals add some named characters to the collection.

AH96/14 is another Austrian general, this time Feldmarschalleutnant Paul Kray, who fought in almost every encounter during the Flanders Campaign of the War of the First Coalition, before commanding in Italy, then on the Rhine during the War of the Second Coalition.

These three well sculptured figures might be exactly the commanders you having been waiting for for your pre-1800 Napoleonic campaigns. If not “exactly” they will certainly work for any Austrian generals of the period.

We move away from the nicely painted Austrian Officers now and look at some not nicely sprayed (it’s what we were supplied with!) other figures.

OTT06 & 07 Switching ranges, we have more mounted officers, this time Otterman Janissaries. 06 is a generic officer whilst 07 is an Aga (or Agha) –  a top Ottoman military official and courtier and the commander of the Janissary corps.

Both figures have separate heads and are resplendent in their uniforms of the period (and indeed for anything 50 years prior or post). These figures are heavily influanced by illustrations seen in Chris Flaherty’s lovely book, The Napoleonic Ottoman Army: Uniforms, Tactics and Organization by Partizan Press.

IT03 (seen below) is a single Bardet leader foot figure. The Bardets were peasant guerrillas who opposed the French (in their thousands) in Italy during the 1790s. This fella seems to be the only one in Trent’s eclectic collect! But if you are inclined towards some Bardet action you might already know where to find IT03 some followers so he’s not leading the resistance on his own.

Fchou 14 & 15. The Chouans were the foot soldiers of the Royalist counter-revolution which took place in (mainly western) France between 1794 and 1800. These two packs represent a pair of mounted musicians and (seen directly below) a three-dimensional facsimile of a famous painting of a Chouan fighter – imaginative entitled ‘The Chouan’.

The musicians (seen below): a drummer and hornist (incidentally, it’s hard to think of a more impractical instrument to play whist mounted!) come with separate arms. ‘The Chouan’ comes with a separate right arm and has an owl perched on his left shoulder (‘Chouan’ being an old French word for Tawny Owl). Whilst not looking too distinct in this photo the owl should ‘come out’ more when painted.

So there you have it, an eclectic selection of new releases from Trent Miniatures all sharing a turbulent decade in history, if little else. Note: Trent Miniatures pricing is equally all over the place, with the two Austrian Officers (AH96/15) coming in at £6.50 whilst the Janissaries are £4 each and the Chouan mounted musicians £5 for the pair! Generally speaking though, very good value for money.

Trent Miniatures can be purchased from