Tiger I and Tiger II Tanks 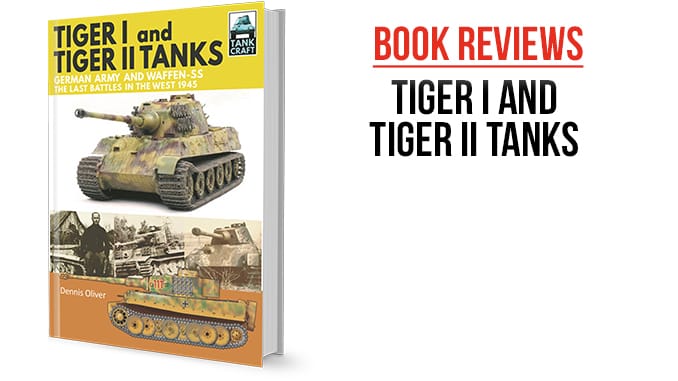 If you ask anyone interested in military history to name a type of tank, the German Tiger would surely be in their top three. Indeed, the Tiger is the symbol for German panzers during World War II, and they are a ‘must have’ for model makers and collectors. This explains why Pen & Sword has produced three books on Tigers in its Tank Craft series, of which Dennis Oliver’s Tiger I and Tiger II Tanks is the third. In this book, Oliver focuses on those Tigers trying, and failing, to stem the Allied advance in 1945, even though very few were left in active service by then. That said, Oliver notes the misidentification of other tanks as Tigers by the allies, highlighting the disproportionate fear these metal monsters caused.

Tiger I and Tiger II Tanks is a glossy A4-sized, 64-page book that most hobbyists are familiar with. After a brief introduction, Oliver provides an overview of the western front in 1945 and a calendar of key events. He follows with potted histories of the panzer units, an impressive achievement in itself given the adaptability of the Germans to move tanks between units to suit the circumstances, then Oliver gets into the nitty-gritty of panzer camouflage and markings, along with technical details and modifications, including hybrid assemblies. The centre-piece is a Model Showcase that reinforces the colour plates and photographs in the rest of the book with model kits of Tigers built by master-modellers, along with a list of major model and accessories manufacturers. I am not sure why this section is not integrated into the book as a chapter, however, rather than interjected into the Units section.

If you are interested in Tigers, this book will save you a lot of tedious internet research time. Oliver is clearly an expert on the beasts, and the production by Pen & Sword matches his attention to detail. The photographs and excellent artwork combine well with the model section, despite my previous quibble, making Tiger I and Tiger II Tanks an indispensable guide to these iconic German tanks.