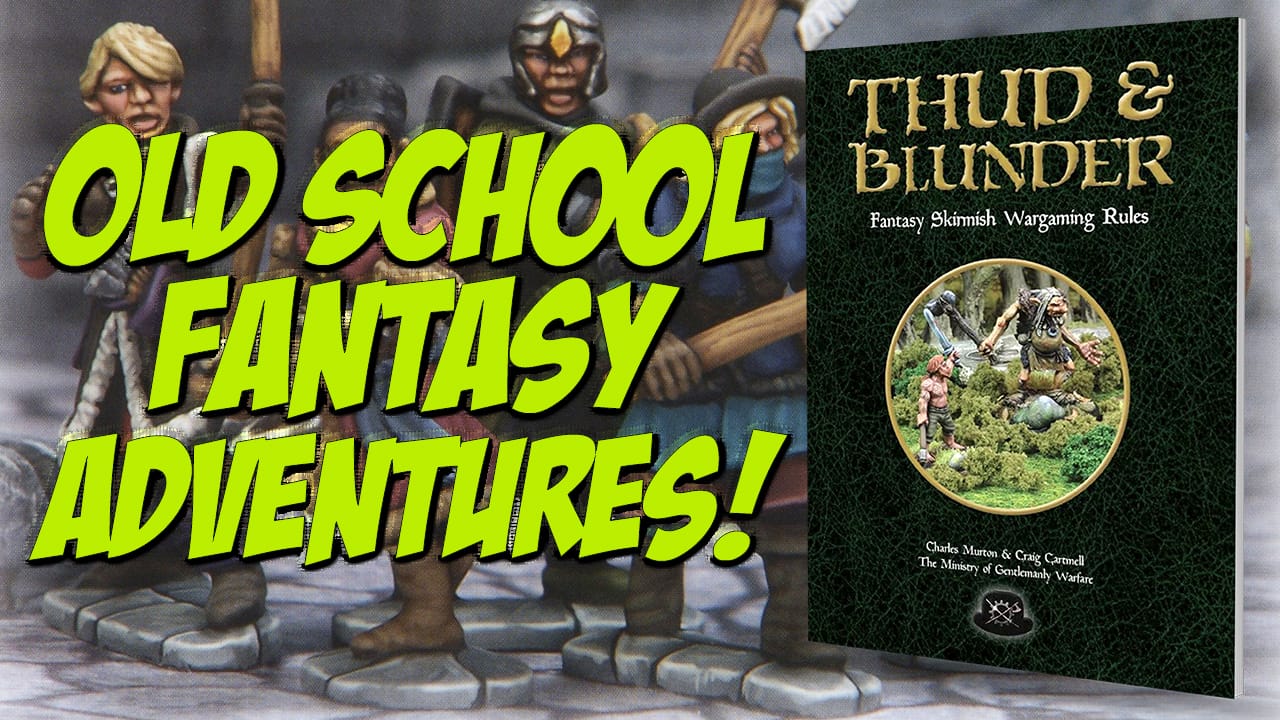 Thud & Blunder is a 164 page hardback book. The rules are intended to replicate the ‘High Fantasy’ gaming of the past, with Warbands skirmishing with one another in a range of settings.

The introduction succinctly outlines the key concepts behind the game and offers a number of resources via the internet. The game uses between 5 and 20 miniatures of your choice, preferably in 28mm, and all tests are made using D10s. The basic characteristics are then explained, with each miniature in the game being defined by 5 attributes, Race, Destiny, Shooting Value, Fighting Value and Speed. The members of a Warband are further defined by Traits, the various skills or objects that add advantages in the game and whether they have Magical Powers. The game adopts a ‘What You See Is What You Get’ approach to miniatures, although all Equipment and weapons have to be recorded on the roster sheet or else they cannot be used.

The rules themselves will be familiar to those who have played In Her Majesty’s Name, Daisho and Blood Eagle. The Thud & Blunder rules are an adaptation of the rules at the core of each of these games. Hence, the rules follow the same turn sequence, with Initiative, Movement using a basic rate in inches, then adding further distance by Running, plus adding a figure’s Speed. Each of the possible movement possibilities are explained in terms of the rules, including mounts and climbing.

Shooting and Fighting are dealt with in roughly the same way, with the result of the roll of a D10 being added to a figure’s Shooting or Fighting value, any weapon bonus and any other modifiers for skills, Traits, etc. Figures have armour, shields, etc. but also use a roll on their Destiny value, which is again modified by the nature of the weapon, magic, and others. If this value is exceeded, the figure avoids taking damage. Those with the Hero Trait also get a number of Hero Points, which can be used to re-roll any of the figure’s own rolls.

The rules cover Traps, fighting within and destroying Structures such as buildings, battling at Sea, the various armour, weapons and equipment in The Armoury, even down to Water Vehicles, all with their abilities and attributes, and simple to follow but comprehensive rules.

The Bestiary section covers both real and fantastical creatures, outlines the Traits, their uses and points costs, the Magical Powers which can be used and how to do so

The rules on creating Warbands cover almost every possible cliché in fantasy, including points values, descriptions of the options available for each type of figure and even a customizing option to create your own characters. Full statlines for a large number of sample figures are included, allowing you to ‘pick and play’ from the outset.

A number of scenarios are included, plus suggestions for Complications, events which cause problems, Landscapes, the potential locations of games, and a set of Campaign rules. In this way, you get all you need in one tome.

If you’re looking for another choice in the fantasy skirmish market, then this is a good option. A low figure count, well explained rules system, and an all-encompassing approach to the whole ‘old school’ fantasy genre make this a useful Warband level game, one of many available.