This Is Not A Test 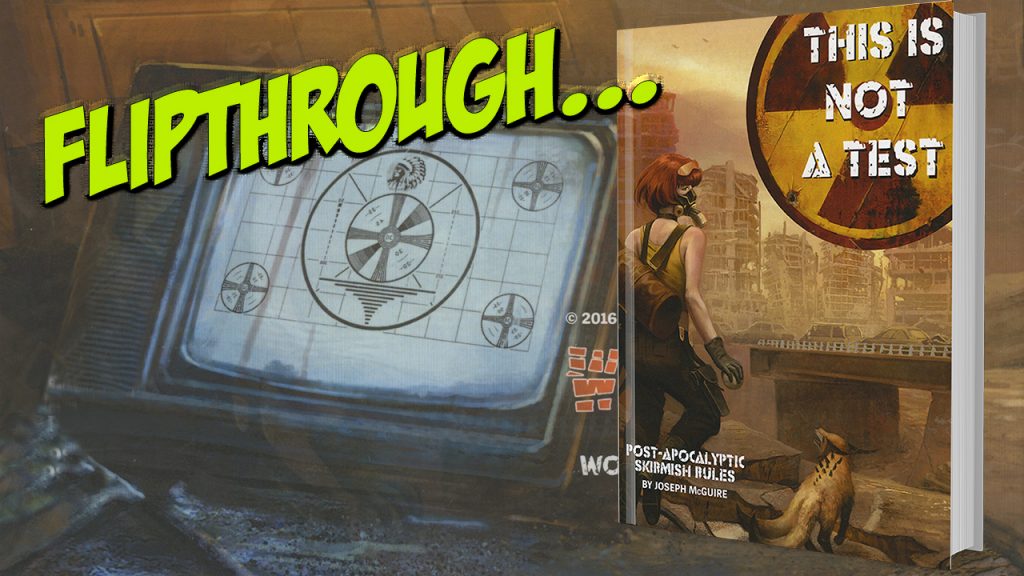 The This Is Not A Test rulebook is a set of post-apocalyptic skirmish rules that doubles as a whole game ‘world’ for players. Every facet of life after the End War is described in just enough detail to spark your interest, plus the rules are comprehensive but quick to learn.

The book begins with a brief history of the end of the old world in 2077 and the birth of the new, including maps and details of the small area of post apocalyptic America which is the main setting for the game. Once that has been absorbed, it’s on to the main game play rules, which only really consist of 13 pages. Simple and straightforward, these core rules rely upon Stat and Skill tests to activate and carry out actions, with combat being based upon opposed rolls.

The book then moves onto various special rules, potential skills and their uses and the range of mutations amongst people, animals and plants following the apocalypse. These rules build upon the core, adding extras to the denizens of the world, a little like a roleplaying game but with simpler, quicker mechanics.

The next section is the Armory, wherein rules and stats are provided for every type of possible weapon, from the piece of wood with nails in through shotguns, assault rifles and the Lost Tech ‘Relic’ weapons. Again, this is clearly and simply laid out, with charts to summarize the use of each type of weapon in the game.

Outlined in this section are the rules to create a Warband for use in the game, drawn from a range of different types. You can choose to create your own version of Tribals, Peacekeepers, Raiders and other archetypes drawn from the post apocalyptic genre. Sample lists for each of the potential factions is included, plus details on how to create your own Warband from those available. Again, this is all set out in a clear and simple fashion.

To get your journey into the Wastelands started, the book contains five generic scenarios, plus rules on random encounters for the twisted flora, fauna and bizarre conditions that can be found in the aftermath of the nuclear firestorm. There is also an interesting campaign system, with a quick and simple resolution method for items that have been claimed or discovered.

This is a great set of easy to follow rules, wrapped up in a detailed but believable post apocalyptic world which borrows from almost every aspect of the genre. It’s a game written by a gamer for gamers, with a complete game world to explore with your Warband. It’s also a nicely laid out book, with plenty of photographs of miniatures from a range of companies, images of terrain that are inspiring and some really atmospheric artwork. All in all, if you’re looking for a post apocalyptic gaming experience, this is the book for you.