“This Black and Fatal Day” Scenario 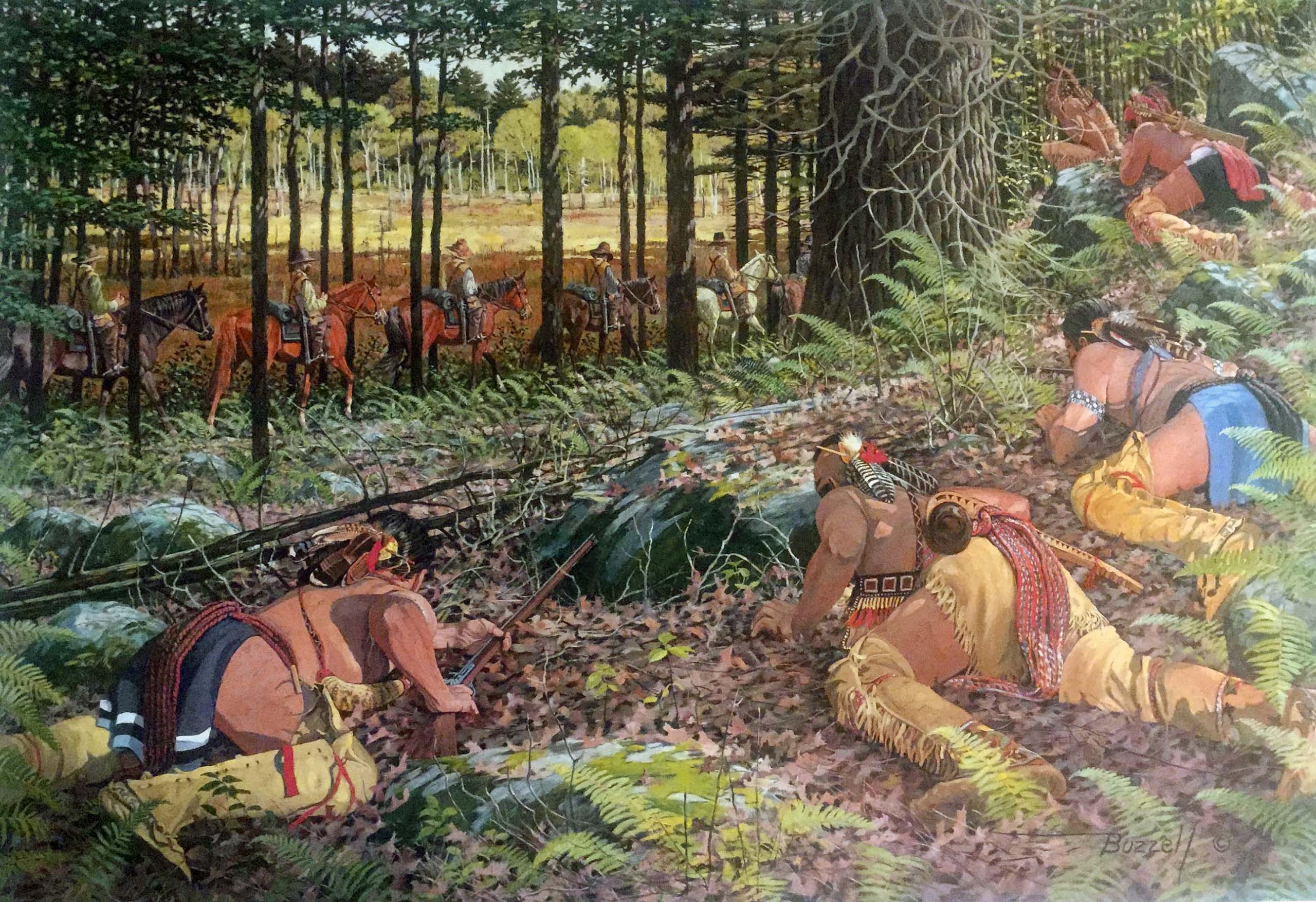 The scenario is based on the historical battle, and should easily work for any skirmish rules, with Muskets & Tomahawks being recommended with forces and details listed below. While historically the muskets used were called firelocks, for purposes of the rules these are noted as flintlock muskets under the forces.

It is unknown whether the ambush was sprung from one side or both sides of the road, and/or one side of the brook or both (when Captain Beers was ambushed a few weeks earlier the Indians attacked from the front and right side). The English had a feeling of security around the brook just before the ambush was sprung, so a force as large as the Indians had would have to be far enough away to be out of sight and not be seen, but close enough to engage in firearms combat. Therefore, the Indians should be far enough away that the English would have to do a spot hidden roll to see them (see Special Rule section below).

Remember that the battle started with a firefight; it’s that old ideology, “I have a loaded musket, so I want to shoot it”. Variations on this battle can be tried and may end up with completely different results for each one.

The quote about Captain Mosley fighting the Indians for “four or five hours” is interesting. It leads one to surmise that the Indians generally stayed in cover to use their firearms, only venturing forth when they outnumbered a soldier, or when the soldiers were reloading. Generally, they did not swarm in a mass attack, and this should be reflected in any rules set used. Likewise, Indian morale should not be high, because they did not generally want to risk themselves unless it seemed like they could achieve success.

Initial Deployment: All Indian units start in the Forest as outlined under their forces. The Colonists are in column on the road heading south from Deerfield, in the middle of crossing the brook. Contemporary accounts do not relate what the relationship of the column to the brook was. The column may have been strung out along the road, or bunched up around the brook waiting to cross, or some carts could be trying to catch up to the column; animals would be drinking in the brook and some Colonists would be picking grapes from the trees and bushes near the brook with their weapons in the carts/wagon. Therefore, it is suggested that up to 50% of the Colonists would be engaged in picking grapes while the teamsters were working to ford their carts/wagon across the brook, and this is what is outlined under the Colonial forces.

Terrain is simple (map uses a 5’x4’ table), with a dirt road leading across a brook through a low shrub-strewn plain edged with trees (the two long edges of the tabletop should be marked with about 4-6” depth of dense forest). The road crossed the brook at grade, so there must have been a fording place (there was no mention of a bridge). The road enters the brook with a slight turn east, and after leaving the brook turns sharply southwest. The distance from the forest to the road or brook, whichever is closest to the forest, anywhere along its length, should be about 12”. It is important that the range be long, requiring the Indians to close if they want a better shot.

The plain was described as a “morass”; probably what is now called forested wetland. The morass is not described as wet or swampy, just that it had thick underbrush and some trees; use lots of lichen with a few scattered trees for effect.

When Captain Mosley attacked, his troopers charged and fought from horseback (at least initially), so the ground was open and solid enough for horse, but probably hindered movement due to being thick (a scattering of low brush or other low vegetation is recommended).

The following details are for Muskets & Tomahawks rules, with notes for Sharpe Practice rules available online.

Brook: Fordable at any point but considered difficult terrain due to being swollen. No movement cost if via the ford on the road. Carts/wagon may only cross the brook via the ford at half movement.

Road: Wide enough for one cart/wagon, two mounted, or three foot figures, and allows normal movement through the terrain, but no additional bonus.

Wagon/Carts: Provide dense cover against firearms if figure is behind.

Teamsters: Armed with flintlock muskets, all in carts/wagon.

Reinforcements #1: Starting the turn following the first turn of firing, roll 1D6. Success being a roll of 4-6, whereupon Captain Moseley’s Company arrives from Deerfield (southern table edge) and add appropriate cards to the deck. Add +1 to die roll for each turn the reinforcements roll has failed.

Captain Samuel Moseley’s Company: All mounted with carbine, pistol, and cavalry sword; all have the Elite and Cavalry Sword traits.

Reinforcements #2: Starting each turn following the turn after arrival of Reinforcements #1, roll 1D6. Success being a roll of 4-6, whereupon Major Treat’s Company arrives from Hadley (northern table edge) and add appropriate cards to the deck. Add +1 to die roll for each turn the reinforcements roll has failed.

Initial Deployment: The column is on the road heading south from Deerfield, in the process of crossing the brook; animals would be drinking in the brook and some Colonists would be picking grapes from the trees and bushes near the brook with their weapons in the carts/wagon. Up to 50% of the Colonists are engaged in picking grapes while the teamsters are working to ford their carts/wagon across the brook, as follows.

It should be noted that Connecticut “was wise in trusting and employing friendly Indians, who never allowed their troops to be ambushed”, while (for the most part) the “prejudice of Massachusetts brought upon their companies dreadful massacres and unavailing pursuits”. All Mohican and Pequot Indians would be musket armed.

In each unit, all have thrown weapons (tomahawks, knife, etc.), with six figures also armed with muskets (poor shots). All units have a leader (Sachem) attached as one of the figures, which automatically counts as +1 morale (officer within 6”/attached) for that unit. For any casualties inflicted on a unit, roll 1D6, with the number of casualties being the chance that the Sachem was a casualty and therefore removed (i.e., for Indian units, the leader is not the last casualty in a unit, unlike in the normal Muskets & Tomahawks rules).

Initial Deployment: All are deployed in forest on either one or both sides of road, as desired. For every two hidden units (round down), you get one dummy marker, plus an extra 1D3 units since you are in ambush.

Moseley and Treat “retired to Deerfield that night, and there he and his grim-faced men were taunted from a safe distance by a group of the enemy warriors who gleefully displayed articles of clothing taken from the English dead.” The soldiers returned the next day to bury the dead “in one dreadful grave”. The sluggish little brook was re-named “Bloody Brook”, as it was reported that it “ran red with blood”.

The fight had been costly for the English “in this black and fatal day”. Captain Lathrop was killed along with 59 of his soldiers and 17 teamsters (John Stebbins is mentioned in contemporary accounts as being the only one of Lathrop’s company to have escaped unharmed), while Captain Moseley had two soldiers killed and nine wounded from his company. The Indians had 96 warriors killed.

After this disaster, “that most fatal day, the saddest that ever befell New England”, the English were in disarray, even concluding the war was the result of “God punishing the Puritans for not abiding by strict religious codes”. Deerfield was abandoned shortly afterward, and later the town was destroyed by the Indians, and attacks on frontier settlements continued at Springfield (October 5th) and Hatfield (October 16th). The Puritans lashed out at easy scapegoats, persecuting Quakers, and imprisoning or hanging neutral and Christian Indians.

CHRISTMAS AND NEW YEAR CLOSURE:
The Wargames Illustrated shop is open for business 24/7 over Christmas and New Year BUT between Thursday 24 December and Monday 4 January we will not be in the office, so no orders will be dispatched and no customer services enquiries will be answered during that time. We will get onto them as soon as we are back. Have a Merry Christmas!
Loading Comments...
Comment
×