Home » Review » They Come Unseen – A game of submarines and subterfuge in the Cold War
Previous Next
Daniel Faulconbridge 07 Dec, 2015 0 comment(s) Categories: Review 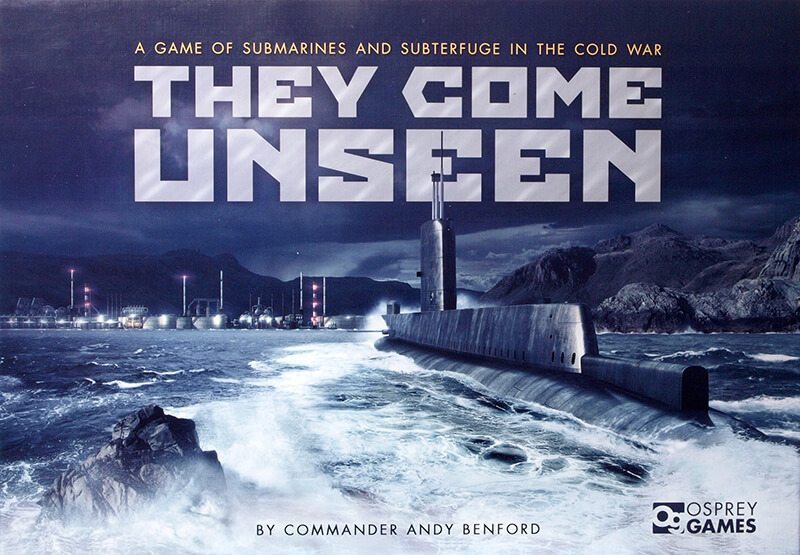 The idea for this game started in 1974 when Andy Benford was navigating officer on HMS Grampus, a Porpoise-class submarine. It evolved, and was playtested by serving naval personnel over the years until it received its final ‘facelift’, when, after a submariner career spanning twenty-one years, with service in diesel-electric submarines, a nuclear-powered hunter killer ‘sub’, and a nuclear-powered Polaris ballistic missile submarine, Andy Benford retired from the Royal Navy with the rank of Commander.

So, They Come Unseen has an excellent naval pedigree, and over the years has been playtested by those tasked with potentially having to solve the type of tactical challenges portrayed in the game, in ‘The Real World’.

In the game, NATO intelligence has identified a series of hidden Soviet research bases in the Barents Sea, and deploys two diesel-electric hunter killer submarines to land saboteurs, steal the intelligence, and destroy the bases. Interestingly, NATO aggressive action is restricted to the actions of the sabotage teams, or laying mines. Personally I’d have liked to have had torpedoes included, but the introduction to the rules reads:

“Neither side can afford to acknowledge a conflict, as nobody wants to spark a nuclear war. The NATO submarine fleet is under strict orders not to use torpedoes: port sabotage is deniable, outright aggression is not”. Oh well, that’s it then. No torpedoes. Shame.

The Soviets use their destroyers to track down and destroy the NATO ‘subs’. Up to two players control the NATO forces, and up to three the Soviets, with one player each taking a destroyer and a third commanding the logistics fleet. The game plays equally well with two players, but as with most games, playing as part of a team provides more enjoyment in my opinion.

You get two high quality full colour printed thick card playing boards marked out in squares representing a fictional area of the Barents Sea with six possible locations for the hidden research bases. The larger board approximately 560mm x 420mm, is for surface movement, and the smaller, approximately 420mm x 208mm, is for plotting underwater sub movement. Also included is a large, screen to conceal the movement of the submarines from the Soviet player(s). I would have preferred the boards to have been calibrated in hexes to avoid the decidedly unrealistic situation where you can effectively cover more ground, or in this case, sea, by moving diagonally instead of horizontally or vertically.

The NATO submarines each have a control panel on which are recorded remaining battery charge, depth, movement and consequent battery usage. The Soviet destroyers have a similar control panel to record fuel used, salvoes of depth charges (mortars) remaining, as well as movement and fuel expended.

The vessels themselves are represented by card counter.

Like all the components in the box, the counters are very good quality but, given a UK RRP of almost £40, I would have expected plastic miniature vessels. Its not a major problem for me, as I intend to either ‘borrow’ some suitable plastic counters from one of my ‘Axis and Allies’ games, or simply buy some GHQ 1:2400th models, but with the £40 price tag I would have expected a bit more in this area.

The box includes more playing aids and tokens including damage trackers for submarines and destroyers, weapons and damage/near-miss tokens, as well as plastic and card sonar search pieces, and even a manifest card to show what logistics are available to the Soviet forces.

The system for positioning the depth charges (mortars) works very well using suitable templates and markers. Each of the possible targeting quadrants is colour coded making it easy to identify the areas of potential hits, but of course as an added challenge the Soviet player also has to accurately estimate the sub’s depth!

The rules only take up 15 pages and are not overly complicated. However, they take a narrative form that means it can take time to check out various points, which when first playing the game can slow things down a bit, and in my opinion a QRF would have been extremely useful.

As already mentioned, They Come Unseen features two playing boards; one for surface movement, the other for the movement of the submerged submarines, which is hidden behind an impressive screen. Depth charges, sorry mortars, can be set for different depths, and the system works very well.

Also covered in the rules are changing weather conditions which can seriously affect the strategies of both sides, and also refuelling at sea for the Soviet players. This latter together with resource management adds a lot of additional challenges for the Soviet player. Do you leave your resources at one of the land bases where they could be destroyed, or do you use your supply fleet to keep them on the move and closest to where they’re most likely to be needed? Controlling the supply fleet effectively is every bit as challenging as commanding the destroyers, or the submarines.

Regarding the basic rules, in response to various queries raised, and clarifications requested, Andy Benford has produced a very useful FAQ which can be found on the Boardgame Geek website.

Also included in the box is They Come Unseen – History & Strategy providing a personal insight into the development of the game as well as a submariner’s view of life at sea and submarine warfare strategy, which I found extremely interesting.

We’ve taken a brief look at the contents and the rules, but how does They Come Unseen play? Well so far, I’ve only had the opportunity to play two games; one as the NATO player, one as the Soviet. But both games were very enjoyable and challenging, tension was maintained throughout and the advantage continually switched back and forth from NATO to the Soviets, making it a game that could go either way until the final turn, which for me is the best indication of a well balanced and ultimately enjoyable game. I did find myself referring back to the rules quite a lot, and a QRF would have helped the game flow better and save time. But playing the game more would make that less of a problem.

As already implied, given the RRP of almost £40, I was disappointed that the game didn’t include any ship models… I mean it only needs seven, but that said if you shop around you can buy the game for up to £15 less than the RRP which makes the absence of models less of an issue.

The layout of the rules is not as clear as gamers have come to expect, but the rules themselves are good and result in a consistently challenging game.

I don’t know about the long-term playability of They Come Unseen, after all its effectively a single mission, albeit in varying locations, but as with any good ‘hidden movement’ game, the real enjoyment is in hunting down the enemy, not necessarily in preventing them achieving the mission. And on that basis I can see me playing They Come Unseen for quite a long time to come.

So ‘Yes’, buy the game you won’t be disappointed, but shop around for the best price, but then we all do that anyway don’t we?