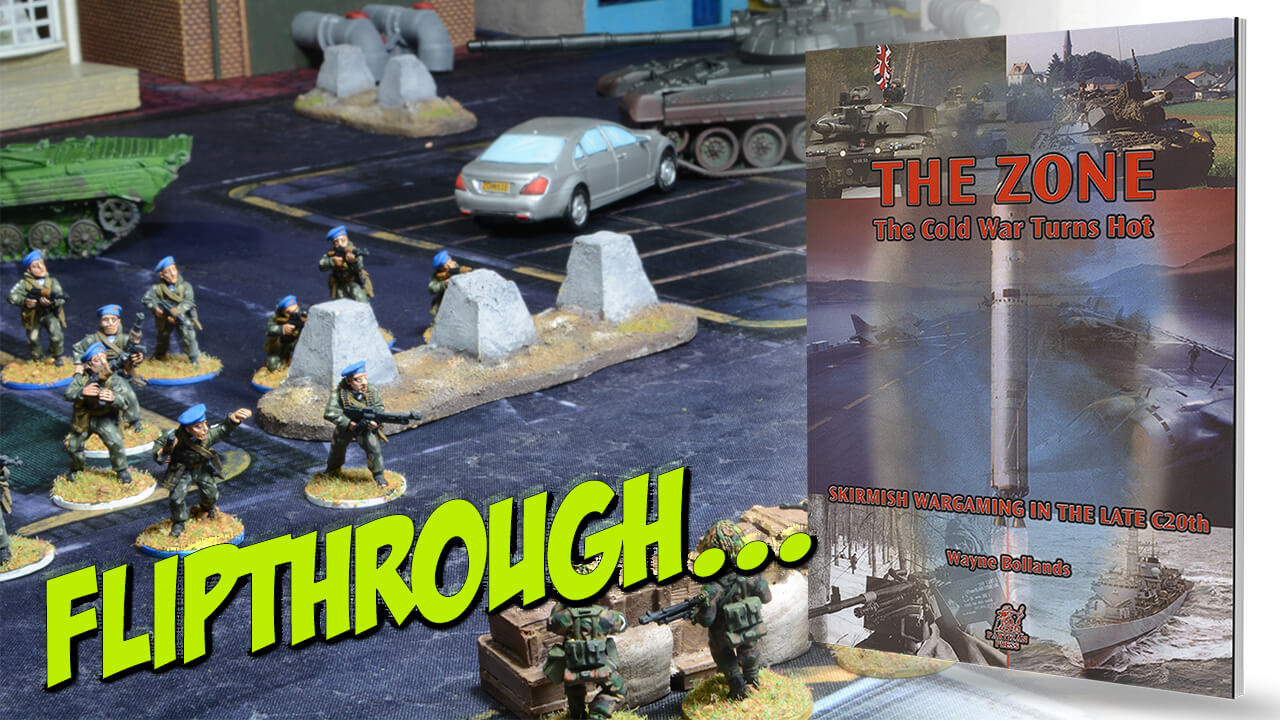 The Zone is a 56-page softback book based upon an alternate 1983 where NATOs Exercise Able Archer and the Soviet response has led to the beginning of a more conventional-style war fought over the devastation that is West Germany. We’ll be covering these rules as a full ‘Rules Showcase’ article in a future issue, so for now we’ve focused on the ‘edited highlights’.

The Zone is a set of rules adapted from the Living On The Frontline: Winter of ‘79 British ‘civil war’ rules. The basic background here is conventional-style warfare in an alternate 1983, where a ‘series of unfortunate events’ has led to the Soviets and Warsaw Pact forces having invaded West Germany and NATO and her allies have responded as planned. The rulebook contains some real unit structures, based upon the available data from the 1980s.

The rules cater for forces of between 30 and 60 figures, preferably 20 or 28mm, with attached vehicular support. Rather than working as individuals, the four man ‘fireteam’ is the core of a ‘unit’ – a ‘fireteam’ works together to undertake the tasks set for the ‘unit’, as defined by the Leader or higher chain of command. If you wish, it is possible to field a unit which uses the same stats for every fireteam or you can mix and match the ability levels. Leaders can also be given an Initiative stat dice, which could reflect the number of fireteams they can activate within their individual command radius. The better the dice, the more experienced the Leader.

To simulate the ‘friction’ of modern warfare, the game has an unpredictable turn sequence – a token for each of the fireteams is placed in a container. These tokens are either Red for the Soviet / Warsaw Pact or Blue for NATO. When a token of the correct colour is drawn, the controlling player may activate the members of one of their fireteams. Either the whole fireteam is activated OR up to two models. However, no new tokens are added for the splitting of a team – even a single figure must still be activated by a whole fireteam token. Each fireteam may be activated once per turn, so players have to plan ahead and react to future events, rather than simply ploughing on with their own planning.

In addition, depending upon the scenario, at least one and up to four (usually the maximum) Black tokens is placed with the other tokens. The moment a player draws a Black token, the current game turn ends, whether a player has managed to activate all their fireteams or not.

Each figure, Leader and armoured vehicle contributes points to the overall Morale value of that unit, which is then halved to produce a Break Point. Once that many elements of a unit are lost, you can either remove the appropriately coloured tokens from the container or test your Morale. A roll of 5 or more is a success but the roll of a 1 is a rout.

This all adds a sense of working against the battlefield conditions – will two men be able to accomplish the task or do you need to commit everyone? Do you use ‘fire and maneuver’ tactics or get the whole team moving at the double? Will you be able to get all your fireteams into the right positions this turn or will some of them be left behind as a result of the Black token ending the turn?

Players create a unit that can comprise of infantry fireteams, support weapons and vehicles. A support weapon counts as a single figure for activation, combat and wound rolls. Vehicles operate in a slightly different way to Infantry, so there is a section in the rules that only deals with this aspect.

Vehicles have the same Shoot attribute as infantry units but do not have a Defend die. Instead, they have a Target die which is dependent on the size of the vehicle (Very Small, like a motorcycle, has a d12, through Medium, which equates to an armoured car or APC, up to Large, like a tank, which has a Target die of a d6).

There are a series of Optional rules which add additional detail to games, whether snipers, helicopters, irregular troops, night and fog or large, multi-player games. In addition to advice on the available figures which were used in playtesting, there is a Scenario Generator, plus 5 sample scenarios that may be used. A double-sided Reference Sheet covers all the basic rules and many of the optional ones, as well as containing stats for a number of key vehicles that may be used to support the infantry.

The fact that this set of rules is adapted from a well-written, thoroughly play tested ‘family’ of rulebooks means that the gameplay is simple to pick up, streamlined and allows for a fast but detailed experience. However, it retains the ‘flavour’ of combat between professional armies, and its overall flexibility allows some customization of your forces.  The activation system benefits both boldness and caution in equal measure, encouraging the need to get things done but being aware of the fact that it may not all work out as you wish.

This is the rules system for those looking for a large scale skirmish game set within a history that could have happened, pitting forces that never clashed on the battlefield against one another. They also enable the Modern gamer to game the real conflicts of the late 20th Century using simple to follow rules and generic stats. So, why not create units of a few figures or dust off that collection of 1980’s themed miniatures you have and get gaming in The Zone or beyond!