“The Young Posse” for Gunfighters Ball 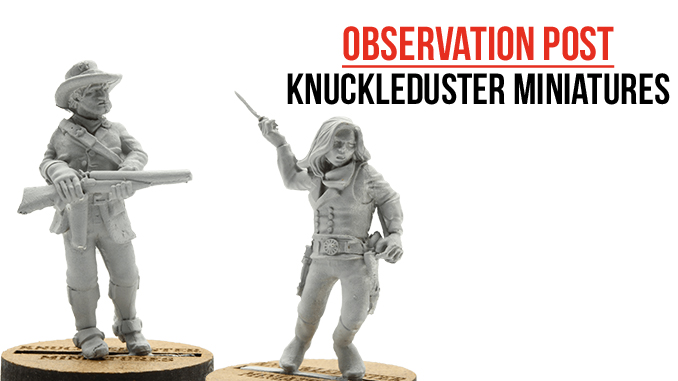 I don’t know if Knuckleduster are trying to take us back to the Old West with this latest pack for their Gunfighters Ball 28mm Western gunfight game, or take us back to the heady days of the mid-eighties. “The Young Posse” is a homage to the movie “Young Guns” which boasted an all star cast including Emilio Estevez, Kiefer Sutherland, Lou Diamond Phillips and Charlie Sheen to name but four. Set during the Lincoln County War of 1878, it told the story of Billy the Kid and his band of “Regulators”, who set out to avenge the death of rancher John Tunstall when he was gunned down by men working for a rival ranch.

Each of these six miniatures is a faithful representation of the characters from the film, for example, depicting Billy the Kid in his distinctive bowler hat and waistcoat with two pistols drawn and “Doc” Scurlock with his duster coat and Winchester. The “Chavez” character, played in the film by Lou Diamond Phillips, is the most dynamically posed of the miniatures, in the process of hurling a knife at some unlucky enemy.

The miniatures weigh in at the tall end of 28mm scale, with most being over 30mm, but they would easily match in with western ranges by companies such as Wargames Foundry. The miniatures are “slotta” base design, and each comes with its own round 25mm diameter laser cut MDF base.  The detailing is excellent and the sculptor has really made an effort to make each of the miniatures look like the character they depict in the film.  If you are a stickler for historical accuracy, then you might find something to nit pick about these sculpts, but as a fan of the movie, I love them. The poses are great, the sculpting is excellent and I can’t wait to include them in my next game of Gunfighters Ball.