THE WARGAMES ILLUSTRATED 2018 AWARDS – THE RESULTS ARE IN… 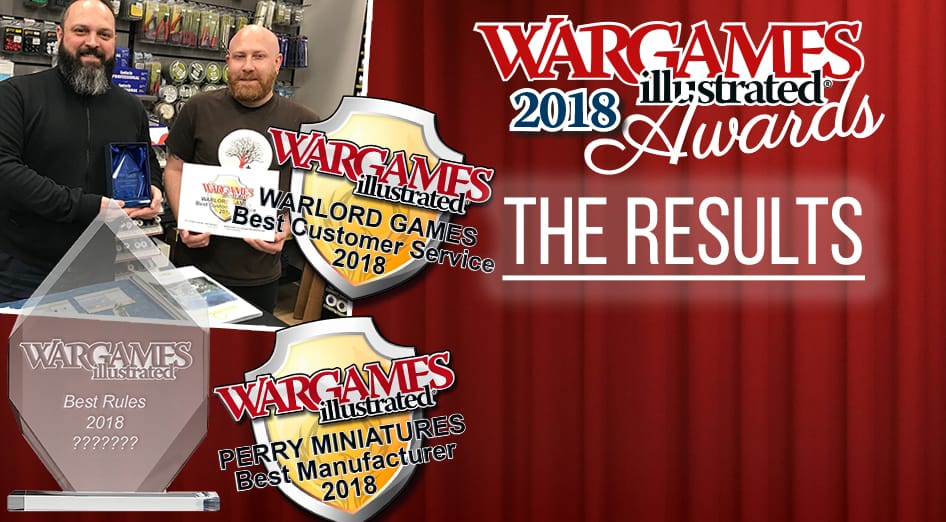 Ladies and gentlemen, boys and girls, it is with great pleasure that we would like to announce the winners of the 2018 Wargames Illustrated awards.

Over the last couple of months, our readers, Facebook followers and wargamers from around the globe (1,060 in total) have been voting in nine different categories for their wargaming favourites.

All the winners have been contacted and in the February issue of Wargames Illustrated, WI376, we will be getting reactions from all of them, but without further ado here’s the results!

Winner: Chain of Command by Too Fat Lardies

Congratulations to the Too Fat Lardies and their platoon level World War Two rules. CoC has won this category for the second year running, just seeing off Bolt Action in second and Battlegroup in third. So that’s a 1,2,3 for World War Two rules!

The Perry twins have scooped this coveted award for the second year in succession.

A staggering 291 different manufacturers were voted for in total, with Warlord Games coming a close second (only 20 votes behind!) and Footsore/War banner third.

The votes in this category were spread over a very wide range (pardon the pun!). Bolt Action narrowly beat last year’s winner; Frostgrave into second place, with Gangs of Rome coming in third.

This was a clash of the Titans between the two big MDF boys: Sarissa and 4Ground, these two got near half of the total votes. But Sarissa Precision took the top spot, with 4Ground second and Warbases third.

BEST CUSTOMER SERVICE (FROM ANY BUSINESS WITHIN THE HOBBY)

This is two out of two for the customer service team at Warlord Games and with over 9,000 mail/web orders a month they get plenty of practice! In second place was Pendraken Miniatures (rating highly for a second year running) and in third were Too Fat Lardies.

Salute won this one for the second year, but close on its heels was Crisis, which moved up from third place last year to second this. Partizan came in third. Historicon was top in the States and 4th over-all.

Winner: What a Tanker!

A second gong goes to Too Fat Lardies, this time for their light hearted and fast paced World War Two tank game; What a Tanker! Warlord Games Blood Red Skies came in second and Gangs of Rome third.

The awards take a bit of a market research turn here, as we look inward and discover that the votes for ‘Best Issue’ of Wargames illustrated were wide ranging, with WI371, (Gaming Campaigns theme) narrowly getting the most, WI368, June (Napoleon’s Generals theme) second.

It was clear from feedback we had been receiving that Garry’s series (five articles in total) on MDF modelling was going down well with the readers and so it proved when it came to winning the award for ‘Best Article’ – well done Gary. Hot on his heels was the second placed Crete 1941 (WI370) by James Morris and third; Bolt Action Western Desert by Roger Gerrish.