THE WARGAMES ILLUSTRATED AWARDS 2017 – THE RESULTS 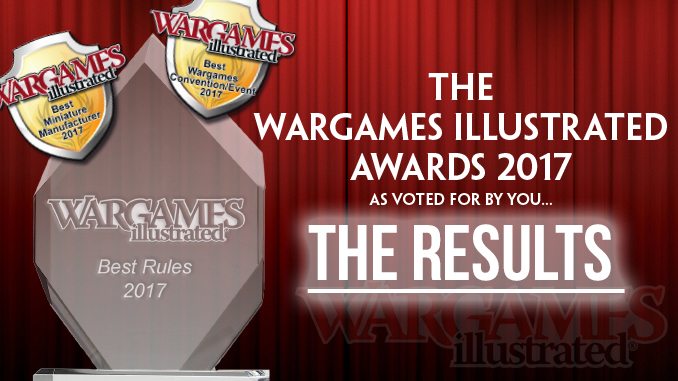 Ladies and gentlemen, boys and girls, it is with great pleasure that I would like to announce the winners of the 2017 Wargames Illustrated awards.

Over the last couple of months, our readers, Facebook followers and wargamers from around the globe have been voting in nine different categories for their wargaming favorites.

All the winners have been contacted and in the February issue of Wargames Illustrated, WI364, we will be getting reactions from all of them, but without further ado here’s the results!

Winner: Chain of Command by Too Fat Lardies

Congratulations to the Too Fat Lardies and their platoon level World War Two rules, they managed to hold off close competition from fellow WWII rules Bolt Action by Warlord Games.

Well done to Alan and Michael AKA the Perry Twins for scooping this coveted award. 37 different manufacturers were voted for in total, with Warlord Games, Games Workshop and Pendraken also performing very well.

The votes in this category were spread over a very wide range (pardon the pun!). Perry Miniatures performed well with many of their ranges, with “Perry French Napoleonics” coming in a close second. But it was North Star and Osprey’s Frostgrave fantasy range that came out on top.

All the MDF boys featured highly in this category, with 4Ground pipping Sarrissa and TT combat to the post.

BEST CUSTOMER SERVICE (FROM ANY BUSINESS WITHIN THE HOBBY)

It’s a great pleasure to reward good service in the hobby, so it’s worth mentioning: Bad Squiddo Games (AKA the Dice Bag Lady), Pendraken, Warbases and North Star who all got lots of votes in this category. But Warlord Games were a clear winner, with several voters taking the time to add specific comments about the great service they have received from Warlord.

Salute won this one by something of a country mile. Partizan came in as runner-up (benefiting perhaps from having two shows… as well as being very good!). Historicon came out on top in the States, and Crisis in Europe.

This one was very closely fought, with good showings from Flames of War 4th Edition, Ghost Archipelago and pirate game Blood and Plunder. But it was Warlord Games’ Test of Honour that took the prize.

The awards take a bit of a market research turn here, as we look inward and discover that the votes for ‘Best Issue’ of Wargames illustrated were wide ranging, with WI355, May (Samurai theme) narrowly getting the most and WI359, September (Pulp theme) second.

This one was all over the place! We’ll tweak this to a short-list next year to make it a bit easier for voters to decide. But let’s not take anything away from Jay White who gets the gong for his article ‘Building Better Scenarios’ in WI358. Well done Jay – the award is in the post!