The War of Three Kings 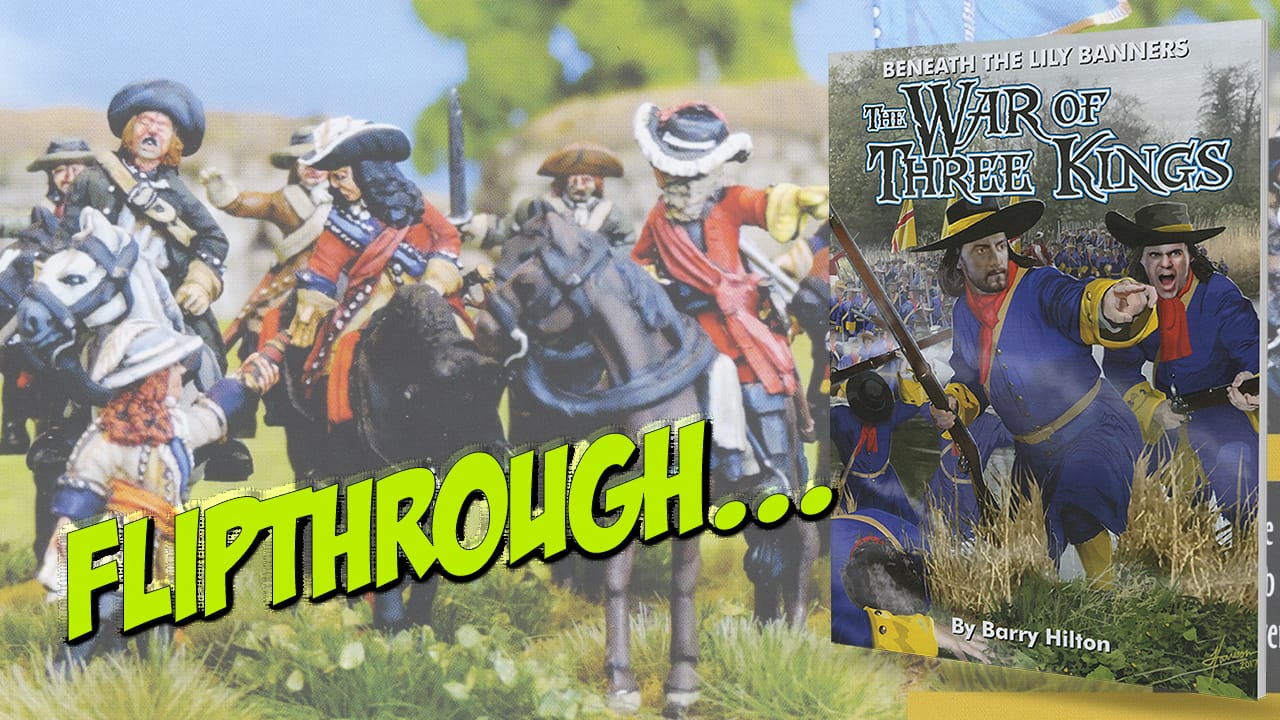 The latest edition of the popular Beneath the Lily Banners rules by The League of Augsburg has just been published. The War of Three Kings offers the opportunity for wargames set between 1660 and 1721 with the rulebook covering pike and shot warfare in western and central European theatres.

The rules begin with a discussion on ground, time and model-to-man scale, handy for those just getting started.

An infantry unit of eighteen models is a battalion and six cavalry models make a squadron. A single gun model actually represents three guns. Consequently, using these formations, the model-to-man ratio works out at between 1 to 30 and 1 to 40.

The rules are intended for use with 28mm figures but work equally well for 15 and 10mm.

This game features both Supreme and Brigade commanders, using four basic qualities of Commander: Gifted, Skillful, Competent and Plodder. These qualities have an influence on how many orders may be given each turn, the number of units that may activate, plus effect how far those units can move.

Order Markers are placed face down next to each unit and the order given must be carried out. All movement is simultaneous, so it is possible for orders to lead to a collision of units or a unit’s order leading to it being at a disadvantage.

However, the fact that the orders are chosen and revealed using markers means that perennial favourite, the ‘Fog of War’, can see a unit get itself into or out of trouble and players must plan out their orders more carefully than in a game which becomes an action and reaction fest right from the word go.

The rules outline the troop types and basic organization of each type of unit, plus the tactics they most often employed. A major change with the new rules from previous incarnations is the re-classification of the types of unit representing their organization and weaponry.

There are now four basic types of infantry unit, Pike; a mob of me n armed with the classic pike and perhaps close combat weapons. Pike and Shot; a mixed unit of troops with pikes and muskets, with more pikemen than the norm. Regulation; an approximate ratio of five musketmen to one pikeman. And ‘All Musket’ which is as the name implies.

Rather than adding plus or minus fire factors, the type of firearm and the ratio of weapons either adds or subtracts one dice of the relevant type to the firing phase.

Cavalry also have two new sub-classifications – they are defined by the terms Blade or Bullet.

Blade cavalry are those that need to get stuck in, swinging swords at the enemy as they charge home, relying upon their speed and the ‘shock of impact’ to carry them through and are quite deadly, with their 5 or 6 to hit the enemy.

Bullet cavalry would be less inclined to charge pell-mell and are more likely to fire from horseback with pistols before contact, needing a 6 to hit. Blade are slightly superior and more likely to win the all-important first turn of a Close Combat round.

The new Troop Quality dimension is another key difference between the first two editions and this new version. There are three main levels of quality, Raw, Drilled and Veteran.

Although Guard troops are available as an optional fourth quality level, this classification of troops means very little during this period –many of the Guards regiments were actually only given the title as honorifics, for political reasons or to ease the often shaky morale of the men themselves.

In the past, D6s and modifiers were used for the all troop qualities. However (and in line with The league of Augsburg popular Donnybrook rule) Three Kings uses different types of dice for each quality level. This reduces modifier lists and provides a base target number for most of the key parts of combat.

Raw troops use a D6, Drilled troops a D8 and Veteran troops a D10. If the optional rules are being used, the very limited number of ‘true’ Guard units available during this period use a D12. The use of these varied dice types provides an automatic differential between the various troop qualities. The main target number to hit for Shooting, for example, is a 6, tough but not impossible for a Raw unit, easier for a Drilled unit on a D8 and even easier for the cold-eyed Veterans using a D10.

Shooting, Close Combat and Artillery fire have all been updated as a result of the unit rules changes, which means that the number of tables to check and cross-check has been reduced or become much easier to obtain results. These changes help to make the game more streamlined than earlier versions and keep the action flowing more rapidly.

As units and armies take casualties, their effectiveness changes. These rules work on the premise that attrition has a cumulative effect on the morale of a unit, which then transfers to the next unit, and the next, until there is a chance that the whole army may become a mob in short order.

Morale is checked at unit level, requiring a 5+ to pass, and is subject to a host of modifiers. The negatives can be offset by proximity to commanders or personalities attached to the unit.

The 3rd edition of Beneath The Lily Banners may have a focus on The War of Three Kings in Ireland but is firmly rooted in fighting battles between the French and their enemies across Europe during the period covered. However, the changing of key rules and the overall streamlining has made it an even easier set of rules to learn and master.

The book itself is well laid out with plenty of good quality examples, including a turn-by-turn AAR and a sample scenario to help clarify a number of points. There is also a plethora of colour images which provide an insight into the spectacle of war presented during the period.

This is a nicely realized update of a rules system which manages to retain the ‘period flavour’ of previous editions whilst offering a more accessible set of rules for anyone looking to game large scale Pike and Shot or early Horse and Musket.