The Walking Dead: Here’s Negan! The Board Game 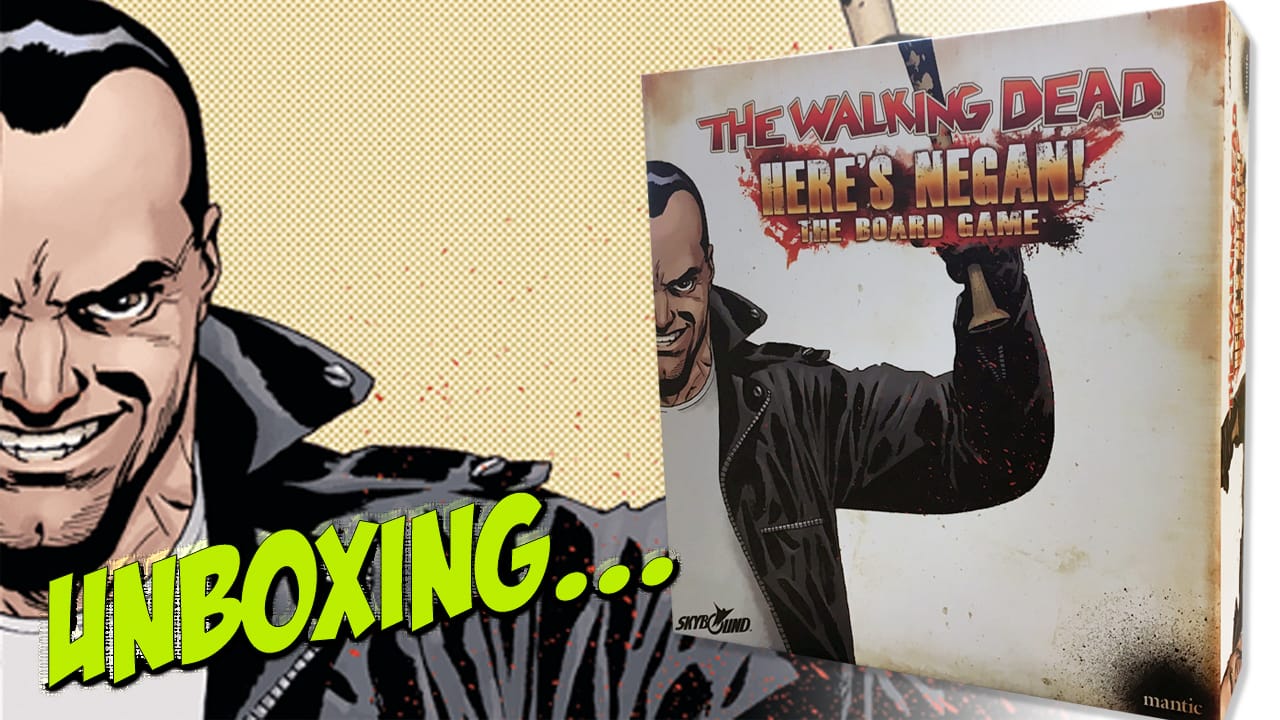 Mantic Games have produced a new game in their Walking Dead Miniatures Game franchise. Here’s Negan! is a complete game in a box, with everything you need to take the role of a survivor in a world full of the Undead.

Opening the box, the first items you come upon are two punchboards full of game tokens. These are made from heavy gauge card and are double sided, representing different states for some items, a threat tracker, named locations, locked and unlocked door markers, terrain, supply markers and more.

After lifting the punchboards, we have the 40-page rules booklet, an A5 softcover which begins with an overview of the boxes contents.

The booklet itself is well illustrated with clearly laid out and easy to understand rules, and some useful examples of play. The game itself revolves around 5 named Survivors, with Negan being used as a NPC who wanders the board without being directly controlled by the players but instead governed by a series of cards. The game is all about gaining Reputation, becoming Negan’s lieutenant.

The in-game information for each of the Survivor characters is to be found on 7 large reference cards, which cover each character, plus a card for the Walker zombies and for Negan himself.

The actual gaming surface consists of 15 double-sided colour printed cards, representing a series of rooms or outdoor locations. Each one is used in conjunction with the rulebook and set up as per one of the 12 scenarios which are outlined in full detail. These scenarios are governed by the use of the 27 Event, 24 Supply, 24 Room and 24 Negan Action cards.

After all those pieces of top quality card and cardboard, it’s time to take a look at the plastic. There are 18 unique plastic miniatures in the set, one for each of the named characters, 12 Walker zombies and a very characterful likeness of the man himself, the vicious but charismatic Negan. These are one piece plastic figures, with integral bases, and are of the usual high standard of all the miniatures in this range. A nice touch is a separate version of Lucille, Negan’s beloved baseball bat and part of the game itself.

The last pieces are 8 symbol dice in different colours, 6 Reputation tracker ‘clips’, the Threat Tracker arrow and, a nice touch, a set of zip lock bags to put loose tokens and markers in.

This is yet another quality product from Mantic Games, which adds to their highly successful Walking Dead range whilst working as a stand alone product. As always, Mantic have looked around at what other companies do and have managed to surpass the majority of wargames-cum-boxed game manufacturers.