The Victoria Crosses That Saved An Empire 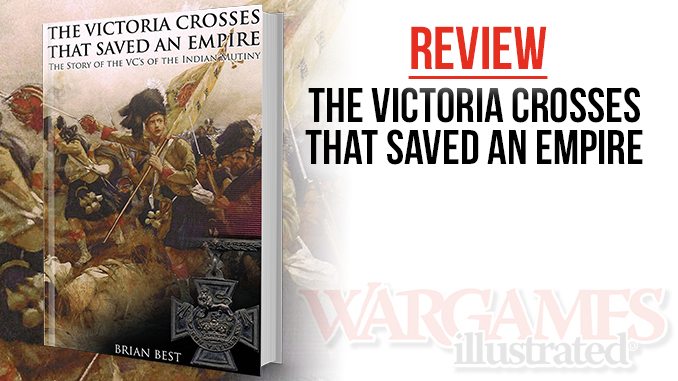 The Victoria Crosses That Saved An Empire by Brian Best
Frontline Books
www.frontline-books.com

The editor gave me this most interesting of books to review with the proviso the resultant review was based around its usefulness to wargames of the Colonial period, in particular the main focus of the book, the Indian Mutiny. So I will do my best in the few lines I have room to type.

The book, a hardback, is 235 pages long, a manageable size for a few solid reading sessions, and it rattles along at a good pace. By its very nature it is repetitive in its chapter construction. This is due to the need to cover the stories of all 182 men, the soldiers, sailors and civilians who performed acts of valour beyond the norm. Of course, this was back in the days when desperate bravery was commonplace!

The Indian Mutiny rattled the British Empire, and the few garrison troops, loyal Sepoys and brave citizens had to fight hard before relief came from all over the Empire, enabling Great Britain to retain its Jewel in the Crown, India.

So, what’s in it for the wargamer?

Well, for small games and skirmishes a great deal. There are many accounts of assault parties storming gates, Dhobi houses, ramparts and redoubts, where a small band of daring men, officers and other ranks would make a do or die attempt on a well-entrenched enemy. Any of these actions would make great skirmish games, and could be replayed quickly as so few models need to be painted.

More importantly, the book provides a real “flavour” of the period, Our sense of duty and code of honour today differs from the Victorian ideal, both for the then-Colonial masters, and the Mutineers. A few chapters of this book will give the wargamer all manner of ideas of how to construct  “winners and losers” in a battle, as the moral victory is as important at times as a military result. So many VC’s were won for dragging wounded men to safety in nearly impossible situations, something easily replicated on the tabletop.

Two other things struck me about this entertaining book. Firstly that so many, and I mean a huge proportion, of the medals won were awarded to Irish or Scottish soldiers, partly as that was the garrison out there, but the percentage won was a breathtaking proportion. Interestingly enough, some were awarded to Indian born white officers.

And finally, the amazing amount of VC’s that were awarded. Between May 1857 and June 1858 no less than 183 were awarded, the same number as in the whole Second World War, climaxing in one day at Lucknow when 24 men were awarded the cross, the most awarded in a single day.

There are the typical pictures of various notables but also some spirited paintings, new to me anyway, of close combats.

So, as a history book, I’d rate this work as a 9/10 but, as per my brief from the author, I’d give it an 8/10 for use by the wargamer. It’s certainly given me a better understanding of the fundamental heroism of the men featured and a host of potential scenarios that I can wargame as a tribute to their bravery.