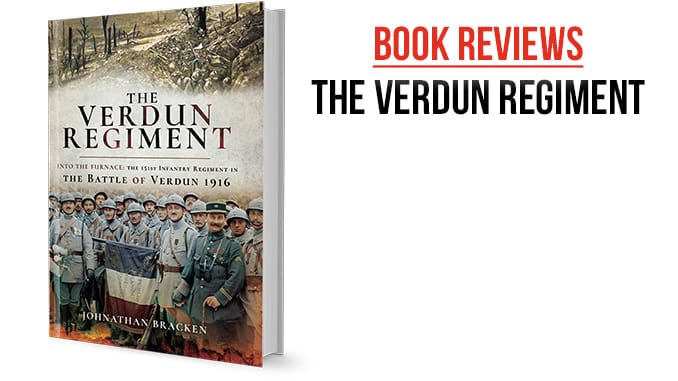 The Western Front in WWI is almost too big an experience to comprehend with any reasonable understanding, the killing too grinding in its manner, and often too horrific to digest in the comfort of our armchairs. But what about the men who occupied often muddy trenches day after day under heavy shellfire, awaiting random death or disfigurement? We know quite a bit about the British Army, but little of the French whose war this truly was. In The Verdun Regiment, Johnathan Bracken goes a long way to filling that gap.

The Battle of Verdun in 1916 is to the French memory of WWI as the Somme is to Britain. It was there that the French lost the flower of their youth in a battle designed by the Germans to bleed France dry and force its surrender. Bracken takes that ‘war within a war’ as exemplifying the French battle experience, and he focuses on the 151st Infantry Regiment not because they were different but because they were typical. They were, however, the Verdun garrison before the war, and they left a significant amount of records behind for Bracken to reconstruct their experience.

Bracken begins with the history of the 151st as they were caught out by the initial German offensives and then participated in the Allied counter-attacks before the trench lines formed from sea to Switzerland. Then it was the Killing Year, 1915, and more fighting and more casualties. The major portion of the book, however, concentrates on the horrors of Verdun, which the 151st visited six times between 1916 and 1917. The intensity of the combat here was almost too much to read let alone ponder what these men must have endured. Bracken concludes with the 151st fighting through 1918 to the Armistice and a summary of what it all meant – that the 151st suffered 400% casualties from start to finish just about says it all.

The Verdun Regiment is an excellent read and a superb work of military history. In amongst the descriptions of the hell of living and fighting in the most absurd of circumstances and conditions, Bracken weaves the personal memoirs of many poilu into a fascinating tale of major battles, tit-for-tat skirmishes, and the parallel wars against lice and mud and filth and degradation. In their war, the survivors watched replacement after replacement file in, like clockwork, then file out again on stretchers. The men left standing thirsted only for revenge.

WWI enthusiasts will find The Verdun Regiment an important addition to their collection. For WWI wargamers, ideas abound, from sniper hunts to trench raids and playing large scale assaults. How to refight actions such as Verdun remains something of a mystery to me, but there is enough in Bracken’s book to find a workable solution.