The United States Marine Corps in the Civil War 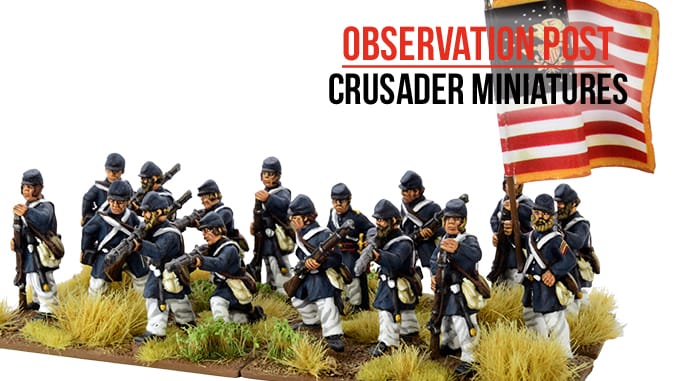 American Civil War enthusiast and North Star proprietor Nick Eyre provides us with (potential) background for some new Crusader Miniatures ‘ACW Infantry in Frock Coasts and Kepi Skirmishing’ which he has painted as US Marines.

We don’t tend to hear much about the US Marines in the American Civil War. This is partly due to the fact they were such a small organisation at that period, at the most 3000 men in an army of half a million, and that the Marines didn’t serve as one body, but were in smaller detachments onboard ships, in naval yards and in forts.

But they did serve throughout, and at times with distinction.

When the Civil War started, a large number of Marines defected to the Confederacy. A third of their officers left, and went to form the core of the Confederate Marines.

Although the Marines at the start of the Civil War were mostly new recruits, they were still one of the few units of Regulars the Union could call on. So when the first Federal army marched to war in July 1861, a battalion of Marines was sent with them.

They saw action at the Battle of Bull Run (21 July 1861). They were in the thick of the action, on Henry House Hill fighting Jackson’s Stonewall Brigade. The Federal army was routed in this engagement, but the Marines managed to maintain an orderly fighting withdrawal thanks to their experienced officers, unlike most of the Union volunteer units.

Bull Run was the only major battle the Marines were involved in. During the rest of the war they served in traditional Marine roles, manning the decks of ships, getting involved with shore landings, assaulting forts etc. They were the Union troops that entered New Orleans for example, and were part of the attack on Fort Fisher in 1865.

Any Union figures in frock coats and kepi can be used for US Marines in the ACW. The difference is in the painting. They will have white trousers and white accoutrement belts. NCOs had yellow chevrons with the points upwards. Officers had ‘Russian knots’ rather than shoulder straps, something you’d have to model on yourself in most cases.