The Roman Republic at War 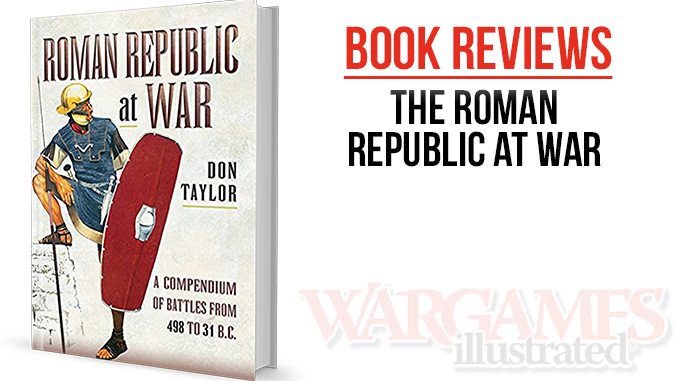 Don Taylor’s The Roman Republic at War takes readers on a cruise through Republican Roman military history with a focus on the plethora of battles fought as the precocious city-state emerged onto the world stage as a fully-fledged empire.

Taylor splits his work into two parts. The first surveys the Roman army from its foundation to the development of the Manipular then Cohortal Legion, including Command structure. That is followed by a section on battlefield tactics, stressing the relentless, machine-like progress of the Roman infantry supported by flanking cavalry. The regularity of Roman camps takes its rightful place alongside battlefield tactics as part of a winning stratagem, and the Roman Navy also receives some attention as a component of Roman imperial expansion. Taylor’s discussion of sources is a useful reminder of how history works, or doesn’t in the case of battlefield numbers. Taylor concludes this section with a useful list of primary sources that cover the Republican era.

In Part Two, the Battles of the Roman Republic, Taylor begins with alphabetical and chronological lists of battles included in his book. He opts for the alphabetical list for his brief descriptions. Then we get into the meat of Taylor’s compendium, the catalogue of battles from 502 BC to 31 BC as told by the primary sources. The battle descriptions are of varying lengths and quality, however, depending on the source; Grumentum in 207 BC is therefore described well by Livy while Grumentum in 90 BC receives a couple of lines from Appianus. This mixing of sources without context somewhat obscures the relative importance of the battles and may create a misleading picture as a result. Taylor includes some maps but only for the better-known battles and they add little to the text. He also adds a limited bibliography in which all the major works are included. His index is split into two for people and places.

Taylor promises “a basic reference for the most significant battles in Roman Republican history.” His alphabetical listing, however, shuts the door to other possibilities; thus the reader will have to work to establish connections between battles and campaigns that a chronological approach would have offered. That said, Taylor’s inclusion of primary sources is an interesting and educational method of compiling these battle accounts – too often readers are persuaded by historians that ancient history is somehow complete and authoritative when the reality is much more porous. It is also perhaps just as well that Taylor uses primary sources for the battles because unfortunately, his own writing suffers from the apparent Pen & Sword editing axiom of using two, three, or more words where one would suffice.

Putting small criticisms aside, there is much for wargamers to gain from The Roman Republic at War. For those already familiar with the period, Taylor’s list of battles will provide excellent material for future games and campaigns. Newcomers will benefit too from the introductory material and Taylor’s gateway into a fascinating period of military history.