The Road to Concord 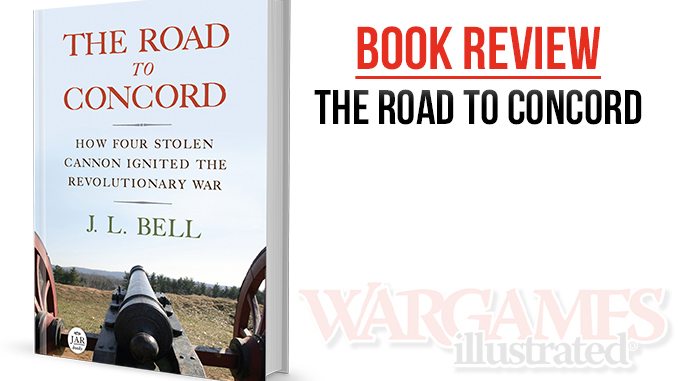 The beginnings of the American War of Independence still throw up new facts as sources are discovered, stories unearthed, and archaeological finds are interpreted. These can change the narrative, sometimes in large ways. In The Road to Concord, J. L. Bell takes the story of four stolen cannon and places it in the lead up to the first shots at Lexington and Concord that led to American independence. This book provides 234 pages with an extensive notes section and comprehensive index accompanied by three maps and some relevant pictures. The book is split into ten evenly sized chapters with an introduction, timeline, and epilogue.

This is a very well written book, J. L. Bell knows his subject thoroughly and has written a perhaps surprisingly neutral account of the build-up to war where he pulls no punches about either side. The three maps are clear, concise, and useful – it is nice to see maps that add to understanding! The story of the guns is interesting and nicely interwoven within the growing tensions of the time. The analysis and relating of how the guns were taken from under the guards’ noses is genuinely gripping. Bell also provides a different slant on the lead up to the “shot heard round the world,” leading the reader along the final, inexorable route to conflict between the Crown and Patriots/Rebels.

There are some minor gripes with the book.. For instance, the ‘timeline’ does not have any dates, which is an oversight but does not really impact the tale. For once, I wanted more maps because the ones provided do such a good job they should have provided more! Bell adds some interesting background information, however this is often too much and lacks direct relevance to the yarn being spun.

This is not really a book about four cannon; it is about the American build-up of arms and ammunition and the growing hostility between the Patriots and Loyalists set against their growing hostility, American reactionism, and British intelligence (what there was of it). Scenarios for wargamers abound in the book. The theft of the cannon could be expanded to be a chase game, and the march to Salem to confiscate guns could have led to the war beginning there instead of Lexington; a “what if” using Sharpe Practice from Too Fat Lardies would be easy to do. I really enjoyed this book, the story flows well, and the minor flaws do not detract from the enjoyment of a highly recommended book.