The Red Book of the Elf King 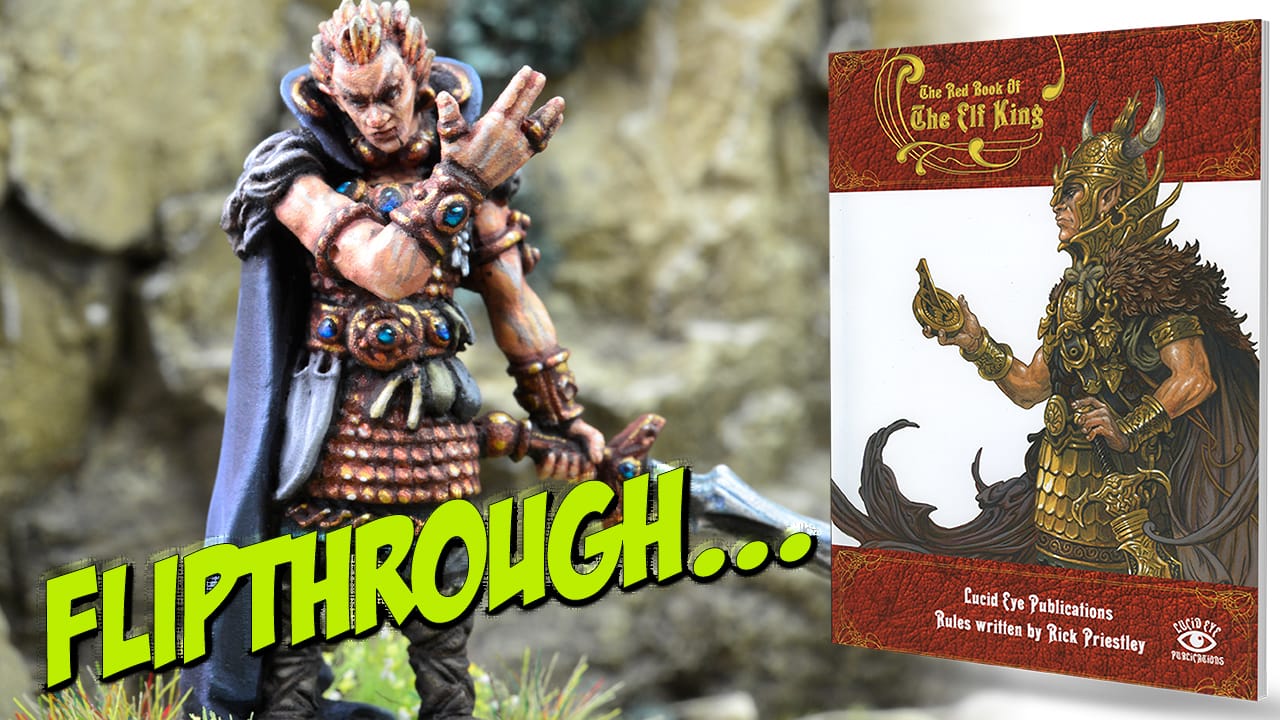 The latest ruleset from Lucid Eye Publications is The Red Book of the Elf King, a set of skirmish level rules set within a unique fantasy world. Having collaborated with ‘rulesmeister’ Rick Priestley, the game uses Elven characters and warriors from their own miniatures range.

The book outlines the background behind the game universe. This is an essential part of the narrative of the game and serves as a backdrop to a very different type of Elf to that seen in other games. The rules follow close on the heels of the narrative, with a clearly laid out guide to what is needed, a Thane or leader character, plus 18 Companion figures divided into bands of 3 models each. The game requires a minimum of 3 D6 dice, all of a different colour, and about four D10’s. The game play is driven by Action Counters, which are ‘spent’ to activate a character or band. There are also Penalty Counters used to ‘block’ actions during play, plus Wound Markers. This is a game where both sides may interact with one another during one side’s turn, using counters, magickal Glamours and other actions and reactions. Each model has a different set of Stats, which offer target numbers to be beaten when attacking or resisting.

Games begin after both players have chosen a Thane and their 18 Companions from six different disciplines or ‘Circles’. The rules for set up and the basic victory conditions, turn sequence, etc. are very clearly laid out, with the turn sequence being particularly clear and gamer friendly. Action Counters and their various uses come next, with the possible Actions being clearly defined. Players roll for the number of available counters each turn, meaning that players can’t rely upon being able to enact their elaborate plans. A Band or Thane may be given more than one Action in a turn, up to a maximum of three. This is a good method to get players to think before acting, and husband their resources in a turn

The Ranged Attack rules are different to other visions of Elves   . Rather than bows and thrown spears, the denizens of the Fae Kingdoms use what is called Rhud Magicks to carry out attacks, basically throwing spells at one another. These are basic powers, rather than the more sophisticated effects of Glamours. Players roll to hit, allocates hits to a unit, then the targeted player rolls the defence stat of each model. A failure means that model takes a wound, and a Courage test is taken by the unit. If failed, a Penalty marker is allocated to the unit. Attackers may move and fire, fire and move, and can make as many attacks as noted on their range (R) stat. Close Combat uses the attack (A) and defence (D) stats of the two groups in combat. Again, if the Attacks outweigh the Defences, wounds are scored, a Courage test is taken and the surviving figures have to disengage. Courage is taken per unit, using the value of any model in the unit. If failed, Penalty counters accrue, with three such counters meaning that unit can no longer carry out actions. The more Penalties you have, the more exhausted a unit, making it harder to resist attacks.

The rules also include the higher forms of magick, known as Glamours. Thanes are the only ones who may attempt to use this type of magick, making a D10 roll based upon the casting value or target number of the spell and the bonus offered by the Thane’s ‘Glam’ bonus. Each Glamour has its own effects as detailed in the relevant part of the rules. Not all Glamours may be used in a game, rather the Thane selects from those available and creates their own ‘battle list’. The rules refer to the use of Glamour Cards, which are apparently available from the company, but all the various details on Glamours and their effects are to be found in the rulebook.

The rules offer details and stat profiles for the first crop of Thanes and Companions to aid players in making their choices of ‘Circle’. There are also seven scenarios, including an introductory scenario with fewer than usual figures and Glamours. Played separately or as part of the overall narrative, it is possible to play a part in the ‘Fae Revanche’, the civil war caused by the departure of the Elf King. All the scenarios are simply and clearly presented, and each one has all the details needed to game with little or no ambiguity.

This is an interesting set of rules, not least due to the slightly different to the norm game system but also the effort made to present an alternative background. The game universe here is pretty unique, with immortals locking horns in a world where Mortals and Trolls are enemies or allies that are largely dis-regarded whilst the Fae deal with the machinations of the different noble house, Thanes and their minions. The ease of reading and clear layout of the rules make this a very accessible resource. Personally, I would have liked to have seen more examples of gameplay and perhaps a greater effort to show the wonderfully sculpted figures in all their painted glory, but the sumptuous artwork partially mitigated that desire. A solid set of rules from an author with an exceptional pedigree, which has enough nuancing to keep you coming back for more. A great publication from Lucid Eye, now what about some rules for The Plot Device range?