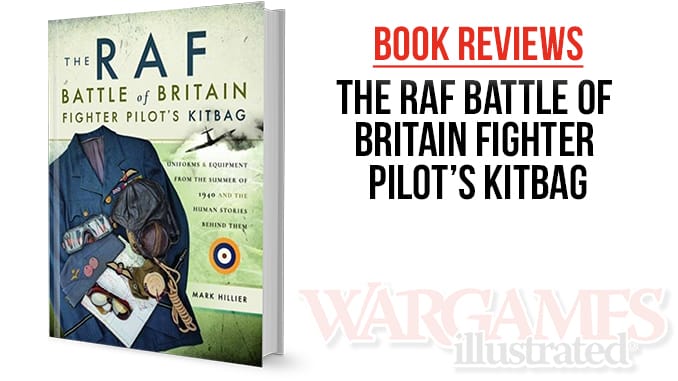 While Mark Hillier’s book “The RAF Battle of Britain Fighter Pilot’s Kitbag” is clearly not one that was written with the wargamer in mind, it none the less has plenty to offer those in our hobby interested in games centred around the summer and autumn of 1940, both that are Battle of Britain specific and those concerning ‘what if’ invasion of Britain scenarios.

The book is split into nine sections, each one covering a different aspect of an RAF fighter pilot’s uniform and equipment in great detail, from their goggles and flying clothing to headdress and insignia It covers all the relevant nations including the Free French’s and Polish Air Force’s and other branches of service including the Royal Navy. Also covered, but to a lesser degree, are uniforms and equipment of the other ranks that made up the fighter squadron’s ground crew and support staff.

Within each of the sections the informative text is well supported by colour photographs of individual items of equipment and clothing as well as period black and white images giving great context to both of these. These photographs also show the pilots in various states of readiness, as they would have been throughout the Battle of Britain, next to various aircraft types – including some of the less well-known ones such as the Bolton Paul Defiant – and next to various types of buildings commonly found on RAF fighter stations of the period.

This is an interesting and well researched book. Although it may hold limited interested to many wargamers it would be valuable to those who are planning either “Operation Sealion” centred games to include RAF Personnel (e.g Warlord Games downed RAF Pilot) or those wanting to bring an air combat game to life with more detailed models of RAF airfields to wage war above.