The Quick and the Undead 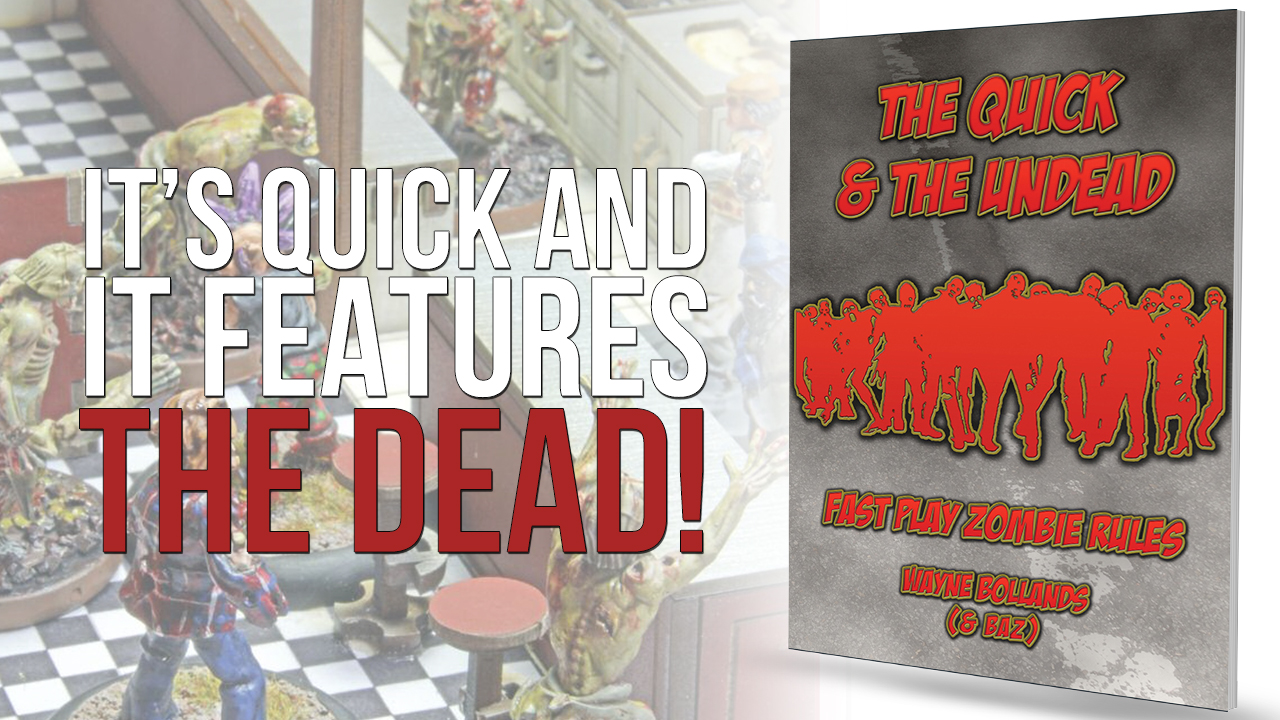 This 44 page soft back A5 ruleset from Partzain Press is designed to be used with Matchlock Miniatures “Bullets and Brains” range of 28mm figures, and not surprisingly these feature in the colour photographs that adorn this book. That said, you could use any range of 28mm human and Zombie figures quite happily. The game is designed to be played on a small 3ftx 3ft size table and requires about six human and about 12 or 18 zombie miniatures to get started. It can be played by two or more players and also has rules for solo play.

The game pitches teams of survivors either against Zombies or other teams of humans, in order to recover weapons, medical supplies and food from infected areas. Each band of humans is led by a hero, who is usually quite a tough nut in game terms, his companions, who are more or less ordinary folk who have survived more through luck than skill, and the human pack horse, who is essentially the person who carries all the kit.

This game follows a similar pattern to many small-scale skirmish games, with miniatures activating and then being able to carry out a set number of actions before the player activates the next miniature. The order of activation is based on a dice roll, with big modifiers going to heroes and not so many modifiers going to the lesser characters and the Zombies. This skews the odds in the heroes favour, and they usually activate first in a round. The first player activates his character and then they take it in order of the dice scores as to who activates next.

Characters can run, shoot, aim, fight melees and so on when they activate. Shooting and fighting melees is pretty straight forward, with a target number needed to succeed on 2D6 plus modifiers, with the wound caused based on how well you did on your to hit score.

Unusual weapons, such as Molotov cocktails and grenades, are also catered for. The author also includes rules for weapon jams and reloading, introducing an element of suspense that is essential in a horror game.

When playing out your scenario, you also have more to worry about than just the Zombies you can see. Some terrain features are designated as “Fearful Features” meaning that, until the humans clear them, they may produce extra Zombies. This is actually a really fun element of the game, with characters approaching an abandoned car or building entrance only to have an unexpected Zombie jump out at them. This clever mechanic captures the feel of Zombie movies, and means players have to be constantly on their toes.

The book provides rules for using vehicles in your game and then concludes with three short scenarios to start you off. One of these involves a group of ECW re-enactors being attacked, allowing you to use your existing ECW miniatures against Zombies as well.

Overall, the rules had a couple of editing issues but nothing that caused confusion, whilst it is written in a light hearted and entertaining way. I think my main issue with these rules is that they could easily have been 10 pages longer. There is an alternate earth timeline provided at the beginning of the book that allows for Zombies during World War II, an idea that I would have liked to see explored a little more, whilst on page 12 the rules talk about the earth being attacked by Demons, Vampires and Werewolves as well as Zombies. I would have liked to see this aspect fleshed out as well, as none of these monsters are presented in the book. Overall, the rules do what they say on the cover, providing a fast paced Zombie game that you can pick up and play.