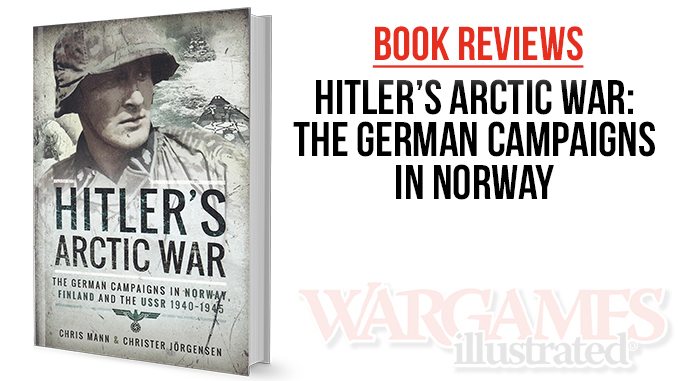 My first thought when thinking of the Arctic Circle in World War Two is the Invasion of Norway, and I suspect many of you do the same, however this book shows there is so much more to it. Specifically this book focuses on the German campaigns in the region, covering everywhere from the Norwegian West Coast all the way round to the attempt on Murmansk. With 224 pages split into chapters by campaign, it also has an extensive bibliography and thankfully an index which is always useful. There are numerous photographs interspersed within the text along with some maps.

Throughout the book there are many pictures interspersed within the text which is something I always prefer. The research and expertise of the authors shines throughout the writing and coveys a real passion for the subject. The writing is easy to read while also containing a lot of information, a difficult task! It is nice to see the later naval campaign given the same importance as the land battles in a book covering both. This is especially true when considered in the context of how critical the Arctic convoys were to the Soviet War effort. The book does not pull any punches about German performance, this is no rose-tinted view of the German War effort in the Arctic and the authors should be commended for that. At the same time it does not try to demonise the Germans either.

I do like most of the pictures, and the number of them, but some are not really relevant to the text they accompany and a little restraint would have served the authors well. It is not always clear that a picture relates to the campaign it has been used to illustrate which is frustrating. The Orders of Battle that are mentioned are not what a wargamer wants to see, there is little to no detail around the regiments present in a campaign. Along with this are the maps which again are very basic and not always clear. As an example there is one map for the Invasion of Norway which also shows where the Allies landed on subsequent dates; this would have been much clearer as a series of maps.

The biggest issue I have with the book is maybe its biggest strength – brevity. This is not an in depth, day by day documenting of the Arctic fighting undertaken by the German forces, it is a taster and overarching view of what happened. It is a book to inspire further reading rather than being a definitive tome. There are numerous incidents mentioned that would make the basis for a game. The capture of Sola airfield near Stavanger by Fallschirmjäger would be good for Bolt Action or Chain of Command while any of the convoy runs could be run using your preferred naval rules. Within the book there are many nuggets which should inspire.