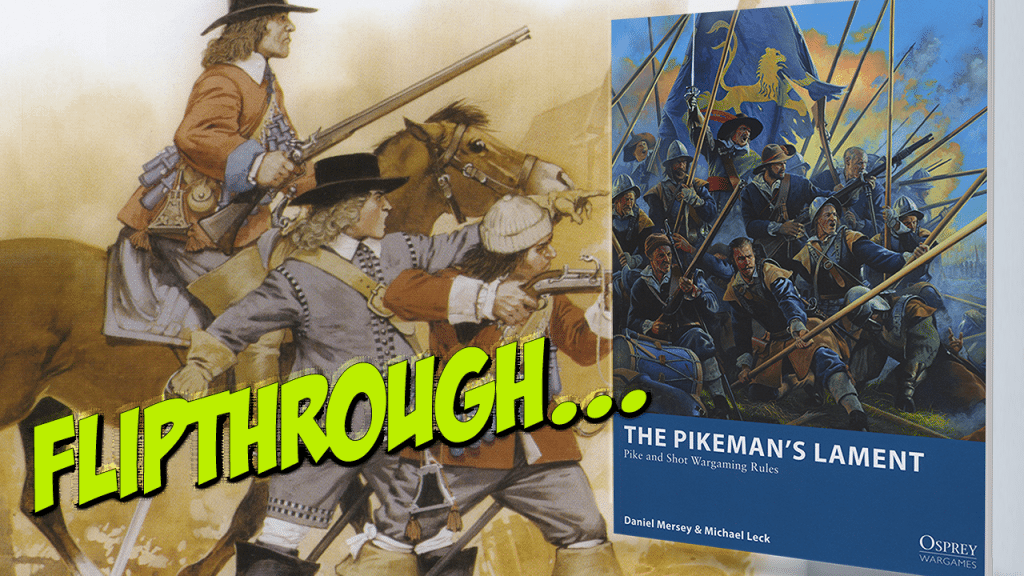 (Note: The text below is the transcript of our Flipthrough video (for those who would rather read than listen).

This latest offering from Osprey Wargames is written by Dan Mersey and Michael Leck. Firmly in the mold of Dan Mersey’s previous Osprey rules – Lion Rampant – the action has moved from Medieval to the period of the pikeman – 1590 up to around 1660.

At the core of the game is the creation of a leader for your Company, the Officer, who represents the player on the tabletop. There are a number of traits and abilities that can be picked from charts but the rules encourage the player to roll these up randomly at the beginning of the game. Officers all have a number of abilities that they share and their abilities are further enhanced by traits and ‘officer Background’.

Once the Officer is ready, you need to recruit a Company. The standard size for this is 40 to 60 models based on a points system, with the average cost being 24 points. Multiplayer options are dealt with early on, with rule suggestions for 2 to 3 players a side.

The Unit Profiles will again be familiar to players of Lion Rampant (with pretty standard ‘stats’ like Attack and move etc.) and so to will the activation system which is alluded to here and covered in more detail later.

The standard troop types of the period are here, with Gallopers, Dragoons, Pikemen, Shot or musketeers and Regimental Guns being on offer.

The Battle Rules system uses six-sided dice, with the activation of units being a key to getting anything done. Players aim to achieve the appropriate stat score for a task in order to Activate their units.

If able to Activate, a unit can Move, Shoot or Attack, depending on the players requirements. Some units may also Skirmish or Caracole, whereupon a mounted unit with pistols may charge in, fire, and retire. The end of a players phase comes based on a number of possible conditions being met including the roll of a Double 1 or Double 6 which indicates as the rules say “your officer might have made a fool out of himself …. Or maybe managed to perform a really heroic deed!” this then constitutes a roll on the ‘Double 1 or Double 6’ table’.

The all important ‘Unit Cohesion’ rules are covered here which tell us that “Individual models move independently” but that “all models must be within 3” of a designated model (probably a standard bearer or captain) in the unit.

The next section of the rules covers Shooting and Melee. In order to hit, 12 dice are rolled if the attacking unit is above half strength and 6 if the attacker is below. This formula will again be familiar to players of Lion or Dragon Rampant, with casualties being removed based on dice scores compared against the targets stamina.

Morale tests are an integral part of the rules, with failure resulting in units becoming closed as Wavering or having to Retreat.

The game is very much scenario or Mission-led, so a number of these are provided in the book, with full rules for objectives, etc.

A number of sample Companies are featured over these pages, covering everything from the Thirty Year’s War, through the English Civil War, The Deluge and up to the Great Northern War. An Officer’s roster and Company roster are included in the book, although no quick reference sheet.

As has become the norm with Osprey ‘blue books’ we get to see some top quality Osprey art and nice looking photos, although it would be good to see figures doing what is discussed in the rules rather than just being eye candy.

As the author says in his notes at the beginning of the book – ‘Our design goal has been to successfully rework the Lion Rampant medieval wargaming rules to represent this next evolution of historical warfare many of the rules remain the same – we are not trying to re-invent the wheel.”

For fans of the Lion Rampnat system this is great news – a new period to game using rules you already like! For gamers new to the system who perhaps weren’t interested in medieval but who’s interest lies in Pike and Shot then I would certainly give these rules a try, if you are looking to game large skirmish in the period.

Their focus upon rules rather than oodles of history is perhaps one of the main selling points of this Osprey series – rather than encouraging you to wade through reams of history, they get you trying to re-enact it with toy soldiers which has become the norm for all .