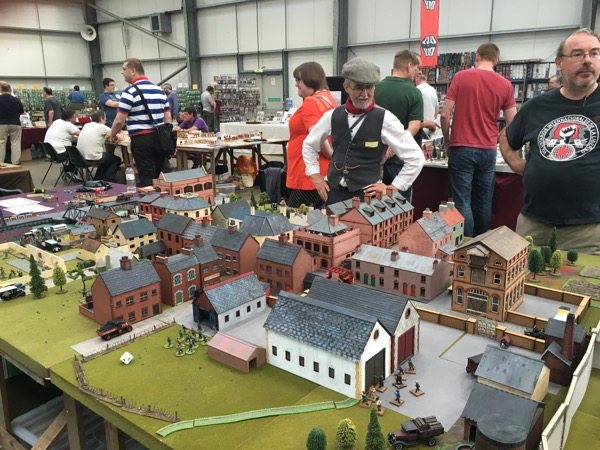 Newark, England played host to the second Partizan show of the year at its new home, the Newark Showground, on Sunday 22nd August 2016. Here’s a quick look at a few of the games from ‘The Other Partizan’.

For the video highlights from the convention check out WI347 Interactive (the tablet version of the magazine), which will be available from 30th August.

Like a Stonewall Wargames Group – The Final Blitzkreig. Attack on St Vith 21 December 1944.

Featuring models from a myriad of different manufacturers, this table used re-cycled terrain from LaSWG’s ‘The Battle of the Snowshoes’ game (check that one out via the WI Vault). The game was played using Iron Fist Publishing’s Battlegroup rules.

Westbury duo Ian and Dave demoed a game set during the Indochina War (AKA the Anti-French Resistance War) in Northern Vietnam. Figures used where by The Assault Group and Empress. The rules where written by Ian and first appeared in WI 238

To mark the centenary of this interesting WWI battle, the boys from BB and LW presented a great looking game full for interesting detail, including over 200 figures from a host of different manufacturers and scratch built sea-craft. They used the Sword and the Flame rules to play the game.

To find out more head to this blogspot – gapagnw@blogspot.co.uk

Figures by Perry, Warlord, Artizan and more featured on this table, which used the Rapid Fire rules to re-fight a slice of WWII North Africa action

A commando raid by narrowboat, bringing a whole new meaning to the phrase “stealth attack”. The VBCW guys always put on a good display and this one was no exception.