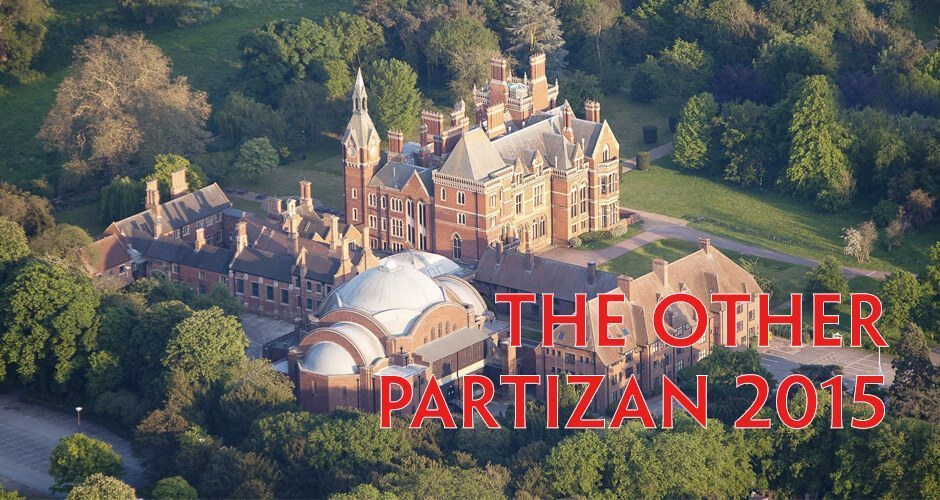 In it’s last outing at Kelham Hall, the double act behind Partizan once again proved why this is a show you really should visit. A whole variety of traders, numerous industry ‘glitterati’ and some really inspiring games are a staple of what many would call a ‘local show’ but those who do visit would say ‘ a true slice of the hobby’!

Two Age of Arthur games could be found on one large, L-shaped table in the Coach House. These were participation events run by the Newark Irregulars and BigRedBat using Simon Miller’s To The Strongest rules. One game had Magnus Maximus vs the Picts in 380AD and the other had Arthur against the Saxons: The Battle at Fort Guinnion 530 AD.

The League of Gentleman Anti-Alchemists had a very nice variant on the VBCW, this time set in France in the 1930’s, apparently a country who was even more likely to fight itself in the 1930’s! Glorying in the title ‘Bordeaux and Bullets’, this was a 28mm game par excellence.

Shaun and Terry of The Bunker put on ‘Indiana Jones and the Temple of Ramalamadingdong (revisited)’. Incorporating just about every aspect of the movies from a turreted WW1 tank to the Dornier ‘Flying Wing’, this was a hectic affair with our heroes in stalwart action – I refer of course to Shaun McLaughlin and Terry, masterminds behind this adventure-laden experience!

Mr. Dave Andrews and Friends presented this game based upon the 1476 campaigns of Charles of Burgundy. Colourful, with banners flying, this appeared to devolve into a bit of a glorious slugging match.

The Like A Stonewall Wargames Group entertained with a 28mm version of the Battle of Yellow Ford, taken from the Elizabethan campaigns in Ireland.

Kallistra Ltd. and the Forest Outlaws used the latter’s Hexon terrain system and copious amounts of 10mm figures to present a fine rendition of the Napoleonic Era at the show, the Battle of Salamanca. At this scale, all those flanking movements looked and were possible!

The Derby Wargames Society ran a scenario based upon the War in Ireland 1689 – 1691, with plenty of English, Danish, Dutch and French in evidence – in the case of the French, on both sides!

In amongst all this historical fare, it was good to see that the RAF Wargames Association had come up with something different – a buggy racing game using ‘28mm’ scale figures of the ever popular Minions.

Using a fantastic, layered board created by Mr. David King, the North Star team offered visitors the chance to adventure within the Frozen City known as Frostgrave. These sessions proved very popular and players were still active even as the show came to an end!

So, all in all, a great day for this final Partizan at Kelham Hall after 25 years. Of course, on 22nd May 2016, the show will be back at it’s new, larger, brighter venue at the Newark Showground. Why not put the date in your diary now as a prospective visitor or even start a game from you or your club?