The Mongol Art of War 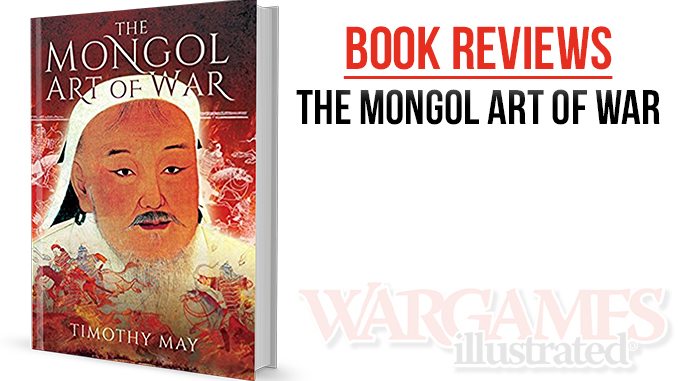 The Mongol Art of War
Timothy May
Pen and Sword Military, 2007 reprinted 2017
Reviewed by Dom Sore

The Art of War conjures up many things when you see or hear the phrase and can have more than one meaning. In The Mongol Art of War Timothy May examines the Mongol war machine as a whole; thus recruitment, leadership and logistics are all covered. This is a surprisingly short book of 214 pages, however, of which 146 pages are the main text. The rest of the book covers the notes, glossary, index, and maybe the longest bibliography in a book of this size. Indeed, the bibliography is longer than any of the individual chapters!

It is obvious May knows his subject and has been meticulous in his research. The section on logistics, while of little use in most modern wargames rules, is fascinating, The chapter entitled Espionage, tactics and strategy is more useful and provides a lot of information in a clear and concise manner. The difficulty lies in replicating these tactics and strategies on the miniatures battlefield! There is also an enjoyable chapter about the opponents the Mongols faced and how they adapted themselves to fighting them. Although the book does not have many pictures or illustrations, there are four that are useful and clear. They cover the Caracole and Envelopment tactics, and the battles of Chakirma’ut and Khalka River.

There are a five maps grouped at the beginning of the book, but they look like they have been poorly scanned and inserted. They also have arrows that are not explained in the legends; I assumed these are Mongol army advances/raids. My suggestion would be to ignore them and find other more suitable maps elsewhere. The book also only covers two battles (Chakirma’ut and Khalka River) and two sieges (Baghdad and Caizhou) which is a real opportunity missed. The information on Chinggis Khan is spread throughout the book, which seems rather odd. His initial biography is covered at the start, thereafter he is mentioned only in passing. The Leadership chapter in particular is screaming out for a little bit more information regarding his abilities and qualities, but instead you are treated to extra information on some of the other Mongol battle generals.

The Mongol Art of War is an excellent primer for anyone interested in the subject. Although suffering from a lack of depth in parts, it also contains a lot of information in such a short space. May could have expanded some chapters, especially those on Leadership, Opponents of the Mongols and At War with the Mongols. With the Mongols there is a real scope for fighting a campaign using similar mechanics to the Limes campaign from Studio Tomahawk’s Aetius and Arthur. One player could be the Mongols attacking a variety of their enemies with armies somewhat determined by one player’s initial choices and using Gripping Beast’s Swordpoint rules for the actual fighting. Swordpoint could also be used to refight Chakirma’ut and Khalka River once the new Medieval Army lists become available. And with Fireforge games having a range of plastic Mongol figures it is a great time to get a Mongol army and buy this book.