The Miniature Adventures of Dunsterforce 1918 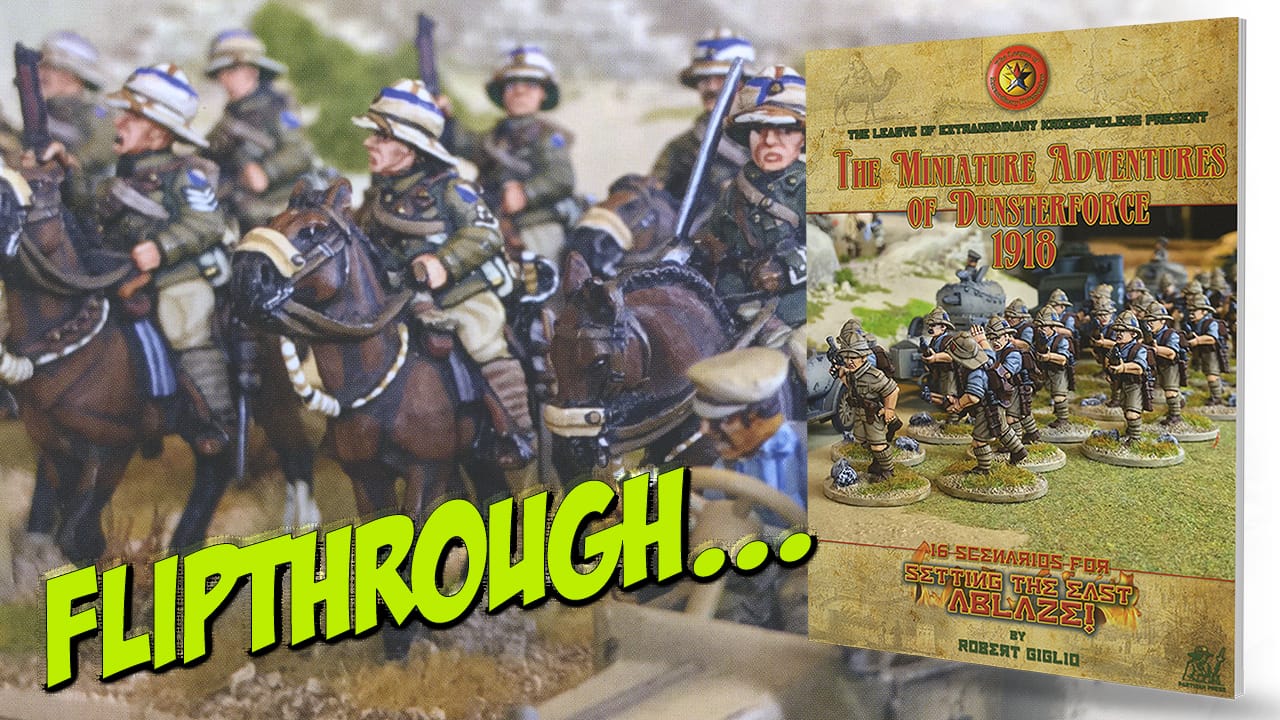 The Miniature Adventures of Dunsterforce 1918 scenarios and rules are contained within an A4 softback book consisting of 160 pages, written by Bob Giglio and published by Partizan Press. There are 16 scenarios outlined in the book, plus 8 appendices and a bibliography, covering the historical events and additional information on uniforms, equipment and further reading options.

The supplement begins with an introduction to the period, plus an overview of Dunsterforce itself, both adapted from elsewhere but very useful for the gamer looking for something ‘bitesize’ to digest.

After the introduction, we are straight into the outline of each of the named scenarios, as shown on the Contents page. Taking the first scenario as an example, each one uses the same format; name and date of the battle, a full account of the historical battle, army lists, special rules, terrain set ups, some clear mapping from Nick Buxey and great photographs of miniatures and games in progress.

These scenarios represent the ‘evolution’ of the battles fought, and would make for a nice campaign setting if played out as a series of linked games. The focus is upon the use of the excellent Setting The East Ablaze rules for gaming the actions, but these scenarios would work for any World War One or Inter War rules gamers may have to hand.

The Appendices cover some very useful ‘extras’ such as how to physically wargame with the variety of troops and equipment available to Dunsterforce, the perils of scenario balance, and terrain, where to find suitable figures at the time of writing, the actual composition of the historical Dunsterforce, the armoured cars used, the nature and composition of the allies and enemies of the expedition, and a useful re-cap of the number of figures and other items required for each scenario (or to add to that shopping list…).

A step-by-step guide to creating a Baku oil derrick aids with specific terrain for some of the battles, and there are some period maps which show the progress made. The final two appendices offer errata for the Setting The East Ablaze 2nd Edition rules, followed by a fairly comprehensive Bibliography for those looking to read more about the period.

This is an extremely comprehensive and very well laid out supplement from Partizan Press. The evolving nature of the scenarios, new rules and supportive ideas for wargaming all combine to add plenty of depth to a period and location which already has a fair bit of atmosphere. The artwork and photography is nicely done, but it is the effort of the extremely knowledgeable author that really adds to the whole book. This is a tome written by an active wargamer to entertain and assist active wargamers, and offers a perfect starting point for a fascinating but sadly neglected aspect of the First World War. Well worth a look, and rewarding for those looking for something different.

We should also point out the January 2018 issue of Wargames Illustrated features a bonus scenario for Dunsterforce, supplied to us be the book’s author and friend of the magazine Bob Giglio (or Robert when his using his posh author name).